Match Urges Singles to Get Back to Love

THE DRUM - June 15 - Ryan Reynolds' agency and production firm Maximum Effort has teamed with Match to deliver a playful, musical campaign encouraging singles to reignite their love lives. It's time to "Get back to love" according to Match. 12 real wedding singers belt out a parodic musical number urging the world's single folks to get back out there so they can get back to working again.

See the top news on Match.com

THE DATING GAME - June 14 - The Dating Game Podcast explores the highs and lows of meeting 'the one'. This week's podcast was focused on dating safety. In this episode, the hosts brought on Mark Brooks, strategic advisor to RealMe, an expert on the business of Internet dating.

SIFTED.EU - June 18 - Smitten, a dating app from Iceland, has raised $2.7M to expand in Europe, and to woo Gen Zers (people born between 1997 and 2015) with a dating app that mixes gaming, entertainment and flirting. Most Smitten users are 25 or younger, and roughly 20% are 18 years old. The company says it will use the investment to launch in the Nordics in late August or early September. Smitten's round was led by early-stage firm byFounders, with participation from PROfounders, Inventures, Brunnur Ventures, Tiny.vc and several angel investors. As part of the round, wine app Vivino founder Heini Zachariassen and PROfounders's Joe Bond will join the board.

SEEKING ALPHA - June 18 - Gary Swidler, CFO and COO of Match Group, lauded the dating app company's recently closed $1.725B acquisition of Hyperconnect, saying the deal expands both its tech base and its geographical footprint. Appearing on CNBC, Swidler noted that the purchase will broaden its business model as well, adding social discovery to its traditional dating services and expanding its move into an a-la-carte revenue stream. 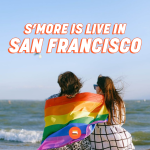 GRIT DAILY - June 18 - S'More, the anti-superficial dating app from former Magic Labs/Bumble executive Adam Cohen-Aslatei launches in San Francisco with 10k registered users from the city already on the platform. This marks the app's 7th successful launch since its inception in 2020. S'More is also celebrating its SF launch by giving away a week of free premium membership to the first 1000 new users in the city.

FINANCIAL TIMES - June 18 - More transparency is required about the algorithms that wield enormous power over billions of people. But while these algorithmic forces impact our daily lives in beneficial ways, they are often inaccessible and mysterious to the average citizen. Most of us have neither the training nor the faculties to understand how these systems impact us. The algorithms are often protected as trade secrets, and not found on a publicly accessible registry such as the US or UK Patent Office. By disclosing their formulas, open-source algorithms allow a cross section of professionals to examine the fundamental principles at play. Security researchers can determine whether our personal data were put at risk during algorithmic processing. Human rights organisations can help to avoid infringement of our fundamental freedoms. Academics can dig into these systems for bias. "Users have the right to know what inputs are being made both into the algorithms that choose their content and those used to moderate their content," says Jillian York, author of Silicon Values.

THE MOTLEY FOOL - June 17 - Soulgate, which operates one of China's most popular social networks, Soul, has filed early-stage plans for an IPO. The Chinese tech giant Tencent owns a 49.9% stake in Soulgate, making it the largest shareholder in the company. While Soulgate makes every effort to say Soul is not a dating app, it's often described as such. That's because Soul's main attraction is an AI algorithm that helps users find their perfect match. This feature sets it apart from other dating apps, where users scroll through reams of profiles to find someone they like. Soul is now China's fifth-most-popular social media app according to Sensor Tower. This puts it in a great position to grow its share of China's mobile social networking market, which it estimates to be worth $18B. Soulgate's $78M in 2020 revenue is just 0.4% of this opportunity. Soul had 1.7M monthly paying users in March, up from 929,300 in 2020. But that's only 5.1% of its 33.2 MAUs.

See the top news on Soul

FAST COMPANY - June 17 - People are looking to date IRL again, but their priorities have changed, according to the latest survey data from Bumble, 30% said they would not date or have sex with an unvaccinated person. 65% now think it's possible to fall in love without meeting someone in person, 38% prefer to go on virtual first dates with people before meeting them in person.

NBC PHILADELPHIA - June 17 - Many dating apps prohibit users with a criminal record, but don't enforce that policy until there's a complaint. Now a background check process could result in banning many people with a nonviolent record. Presumably the idea is to make users safer, but none of the apps were actually willing to go into detail about why they believe that banning anyone with any sort of conviction would make users safer.

Dating Gets a Stimulus Package: Tagged App Will Pay for First Drink

BUSINESSWIRE - June 15 - The Meet Group, a leading provider of interactive dating solutions, is launching DateNight, a livestreaming game which makes anyone the star of their own dating game, on its Tagged app. DateNight offers rewards to anyone who plays. DateNight's participants will receive a free $10 gift card to one of 18 different national chain restaurants to give daters a well deserved "dating stimulus" this summer. DateNight events will occur over the next month on Thursdays and Sundays from 9:00 - 11:00 p.m. EDT starting June 17 and ending on July 31, 2021, but this program may be extended.

INDIAN EXPRESS - June 14 - Bumble recently introduced its new 'Night In' feature targeted at virtual dating. The feature will allow two Bumble matches to experience interactive games over a one-on-one video chat. Bumble had launched an audio notes feature last year and the app is now also adding a new video notes feature. The addition allows people to send quick videos to each other directly in chat to help "break the ice and build deeper conversations".

ANI NEWS - June 15 - Woo believes that more vaccinations will allow people to once again meet in person and connect in meaningful ways. Woo's recent research analysis confirms that 70% of users will consider meeting their dates if they are vaccinated. Interestingly vaccination has now become a parameter to showcase a personality trait and also behaves like an initial level filter for many people.

See the top news on Woo

THE DRUM - June 15 - It goes without saying that Covid reimagined socialization entirely. One of the sectors that felt this shift most acutely - and yet was perhaps among the most well-prepared - is the online dating industry. At the onset of the pandemic, 82% of singles turned to online dating. And engagement has remained high throughout the past year and a half. On Tinder, for example, users saw an average of 11% more swipes and 42% more matches in 2020. Meanwhile, Hinge saw its global app downloads spike 63% in 2020 compared to 2019. Virtual dating and video chatting are here to stay. Daters also revealed that they are looking for something a bit more serious these days. 75% of Hinge users say they're seeking a relationship this summer rather than a casual fling. Health transparency is now the norm. The brands that dominate the online dating space are increasingly teaming with other organizations to bring new experiences to daters, market their product in innovative ways and expand their offerings.