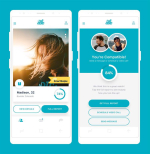 August 7, 2018 -- /ACCESSWIRE/ -- Say Allo, the artificial intelligence mobile dating app and smart singles community, announced the launch of its unique video chat feature allowing safe and convenient video meet-ups within the app. The new dating feature will allow women and men to verify who they are messaging before meeting in person, eliminating the chance of being catfished - further protecting Say Allo's community from fake profiles. The company is proud to be making the announcement at the Black Hat USA 2018 | DEF CON event taking place today Aug-7 through Thursday, Aug-9 (7:00 am - 7:00 pm) at Mandalay Bay in Las Vegas.

In a recent Pew Research study, it is estimated that by 2040, 70% of people will have met their significant other online and that nearly 40% of single Americans are using online dating sites or mobile dating apps today. As the number of people looking for love online or through dating apps rise, "so does the potential for threats," writes cybersecurity expert, "Say Allo" board member and Applied G2 CEO, Joy Randels.

Randels continued, "For women, safety is our biggest concern with everything we do, so advocating enhanced security protocols such as the new video chat feature will enable our community of smart singles, women and men alike to learn so much more about their match instantaneously. I believe this an important safeguarding tool that allows two interested parties to build trust when forming a new relationship, and avoid the potential for scams, catfishing or malicious behavior."

"Time is precious, especially when you're eager to meet the person you've been interacting with on a dating app. While messaging is convenient, we live in an age that allows us to connect immediately through video to see if there's a spark and verify if the connection is - real. We couldn't be more proud to be making this announcement during the Black Hat USA 2018 | DEF CON cybersecurity event," said Say Allo founder and CEO Zackary Lewis.

About Say Allo
Say Allo is the first mobile dating discovery application that uses artificial intelligence and a continuous learning algorithm based on Cognitive Behavior Therapy (CBT) technology. After a limited beta release in Colorado, Say Allo opened up the application to the US in late 2017. Say Allo is available for both iOS and Android devices. For more information about Say Allo, visit www.justsayallo.com.

This is only a preview. Your comment has not yet been posted.

The letters and numbers you entered did not match the image. Please try again.

As a final step before posting your comment, enter the letters and numbers you see in the image below. This prevents automated programs from posting comments.

Having trouble reading this image? View an alternate.

(You can use HTML tags like <b> <i> and <ul> to style your text. URLs automatically linked.)

(Name and email address are required. Email address will not be displayed with the comment.)