HARVARD BUSINESS REVIEW - A large-scale two year study (with Inner Circle) suggests that carefully managing the threshold for the number of referrals needed in order for referring customers to access the premium features can increase customers and generate more profitable ones. There's 8k+ dating sites in the world. In 2019, 39% of U.S. couples said they met online. In 2020 270m adults worldwide subscribed to a dating site, ~double 5 years ago. Most sites don't have a clear idea of how profitable referred customers are compared to the (originating) friends who invited them to join the site. The number of successful referrals users are required to make before they can access premium features (called the referral threshold) can have important effects on users' behavior. Referral-driven growth typically comes at a cost: as the number of referred users in the population grows, their collective level of engagement tends to fall. Raising the number of successful referrals needed to win free access to premium features did not have an impact on the relative activity of their converts. New members were as engaged as those invited by users in referral programs that had a lower threshold. Total revenue increased when we raised the number of successful referrals required for free access to the premium features. Adding additional referral requirements in exchange for premium features did not disincentivize some users. Tweaks could be dynamic: the platform could start by assigning a freemium plan to all users, and after assessing behavior, decide whom to give the option of joining its referrals-for-features program. Individuals value having their friends on the platform. Social referral programs designed to enhance the shared experience of online dating (for example, by organizing offline activities) could be particularly effective in increasing platform engagement.

Mark Brooks: This study was run by Professor Ting Li and Professor Rodrigo Belo, Rotterdam School of Management. Given that the only mutual contacts I have with them on Linkedin are with Inner Circle, I'm going to infer that this study was with Inner Circle. In short, it's worthwhile amping up your price and proposition testing. Time to hire a data scientist if you don't already have one, or perhaps open up to experiments by academics like this. See IDEA's Project 0d8 at 0d8.com, btw.

Should You Have Kids?

THE ATLANTIC - We (IDEA) bring people together for love and marriage, and most end up having kids. Fertility rates are down globally. Why? Is it because couples aren't happy having kids? An article in The Atlantic this week asks "What Becoming a Parent Really Does to Your Happiness." Here's a summary of the article - Mark Brooks
__

Scholars argue if you want to be happy, be childless. What if the rewards of having children are different and deeper than happiness? Daniel Kahneman et al asked 900 employed women to report on activity happiness. Being with their children was less enjoyable than many other activities.

When a child is born, parents experience a decrease in happiness and a drop in marital satisfaction that doesn't usually recover until the children leave the house.

One study finds that fathers ages 26 to 62 actually get a happiness boost, while young or single parents suffer the greatest loss. There are geographic differences. A study of people in 22 countries found the extent to which children make you happy is influenced by whether your country has child-care policies such as paid parental leave. The country with the greatest happiness drop after you have children? USA!

A puzzle remains: Many people would have had happier lives and marriages had they chosen not to have kids - yet they still describe parenthood as the "best thing they've ever done." Memory distortion makes us remember peaks and forget awfulness.

There's more to life than happiness. > Satisfaction, purpose, and meaning.

Mark Brooks: I think Professor Paul Dolan put It best in his book "Happiness By Design". He resolves happiness to finding both pleasure and purpose in life. I can attest, kids give parents a huge dose of purpose.

Is Finding Love on a Dating App More Likely to End in Divorce?

YAHOO NEWS - Researchers at Savanta ComRes discovered couples who connected romantically via a dating app were 6x more likely to divorce in the first three years of marriage. Those who were brought together by friends, family and neighbours tended to see their unions last longer. 2,027 married adults age 30+ were surveyed. There was no difference between short and long term focused services like Tinder vs eHarmony. The survey was commissioned by charity Marriage Foundation.

Can Evolutionary Theory Be Used to Understand Online Dating Abuse?

FORBES - Aug 17 - A new study published in the Journal of Interpersonal Violence explores why people engage in abusive behavior on online dating sites and apps. The answer, according to the researchers, has to do with two well-known evolutionary phenomena: mate value discrepancy, or the difference in resource value between oneself and one's romantic partner, and intrasexual competition, or the rivalry that occurs between individuals for potential mates. Partners who feel as though they are less "valuable" than their romantic partner and those who view dating as highly competitive are more likely to do things like monitor a partner's whereabouts online, delete ex-romantic partners on social media, post embarrassing comments or photographs relating to a partner or ex-partner, and threaten a partner online. A recent Pew Research survey found that only half of Americans viewed online dating as safe. Industry insiders are also worried about user safety; a recent study by RealMe, an online reputation platform dedicated to cultivating safety and trust, found that 80% of dating insiders admitted to seeing an increase in scamming, catfishing, and other bad faith actions over the past year and that two-thirds said their users are asking for more protection, especially female users.

The Unexpected Role of Kindness

ZUR INSTITUTE - Mar 19 - Kindness, we know, is important. It drives social relationships, eases anxiety, builds trust and might be the glue that bonds long-term relationships. Researchers from Swansea University asked 2,700 students to use a fixed budget to ...build the perfect partner. They were given eight attributes they could spend money on: physical attractiveness, good financial prospects, kindness, humor, chastity, religiosity, the desire for children, and creativity. The characteristic that was given the highest priority was kindness (Thomas et. al., 2019). Students spent 22-26% of their total budget on kindness. While we might not be endowed with the physical attributes that we wish we were, we are all capable of kindness.

This Machine Read 3.5 Million Books Then Told Us What It Thought About Men and Women

WORLD ECONOMIC FORUM - Sep 30 - Machine learning analyzed 3.5 million books to find that adjectives ascribed to women tend to describe physical appearance, whereas words that refer to behavior go to men. "Beautiful" and "sexy" are two of the adjectives most frequently used to describe women. Commonly used descriptors for men include "righteous" and "rational" and "courageous." The words used for women refer much more to their appearances than the words used to describe men. Positive and neutral adjectives relating to the body and appearance occur approximately twice as often in descriptions of female figures, while male ones are most frequently described using adjectives that refer to their behavior and personal qualities.

IDS - Feb 15 - Here's some cute ideas for how Behavioral Economists would do Valentines cards. 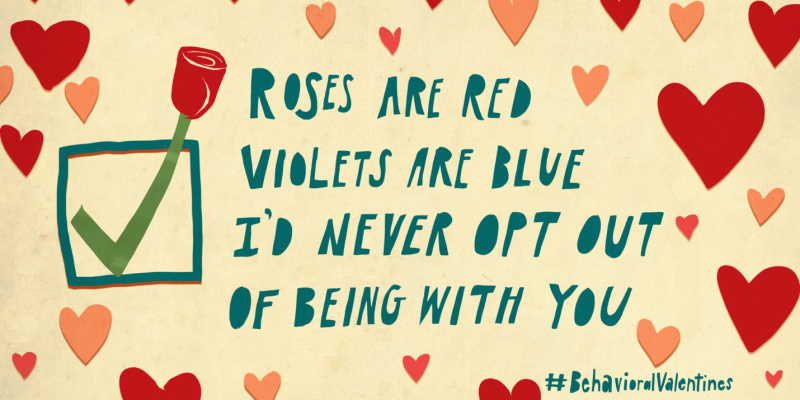 Along with OPW.news, we also run BehavioralEconomist.com which is a Facebook group with 12k members.

I believe past behavior is a key indicator of future behavior, and character traits. That's very relevant to dating. I think we need more behavioral economists looking at the dating industry and giving us their wisdom. So, I bought BehavioralEconomist.com, while studying BE at London School of Economics in 2017. Now the community is taking off nicely. Join the fray at BehavioralEconomist.com.

IDS - Feb 14 - More people are meeting on dating apps and online than ever before. This paper unpacks some of the details of the trend. 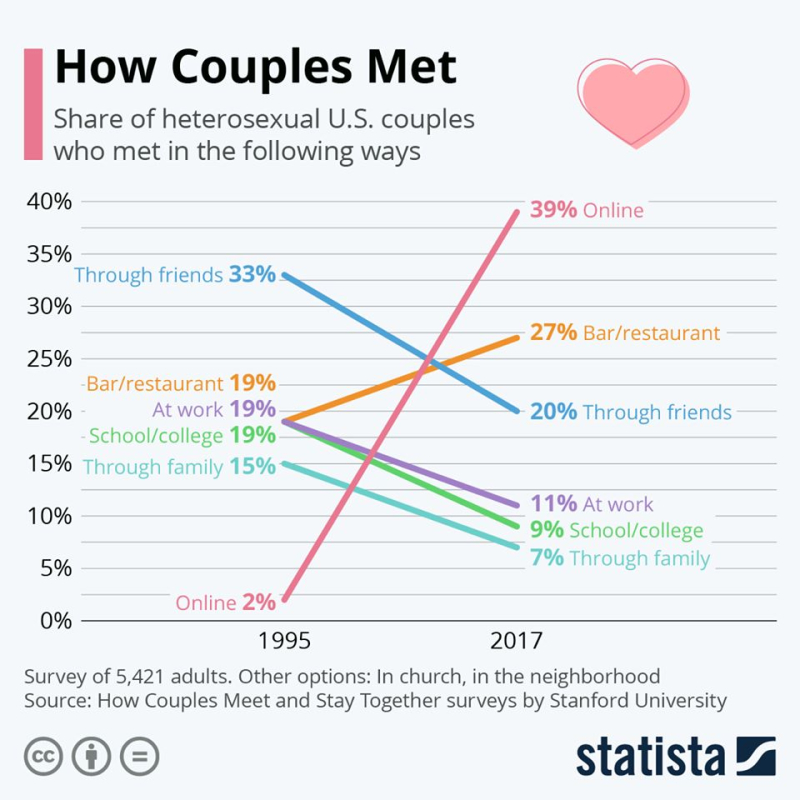 MEDICAL LIFE SCIENCES NEWS - Nov 17 - A new study (with 634 participants in their 20s) in the journal of Experimental Social Psychology concludes that when people are especially attracted to someone, they'll be more likely to misrepresent and fib.

Sexual Rejection Lasts Longer Than the Pleasure Of an Accepted Advance

RESEARCH DIGEST - May 31 - Couples have sex 1 or 2 times a week, but ~half of sexual advances go unfulfilled. While having an advance accepted leaves partners feeling more content, this effect may be short-lived compared to the dissatisfaction of being rejected. 115 heterosexual couples age 19 to 64 kept sex diaries for 3 weeks about sexual advances and answered questions such as "How good is your relationship compared to most?" Changes in sexual satisfaction could still be detected days after advances were made. The team found that the boost in satisfaction from having an advance accepted persisted for 24 hours, with the slump of being rejected lasting twice as long. The gratification that came from being either an acceptor or a rejecter lasted a remarkable 72 hours.