Love Is In the Air

NEW MEDIA AGE -- Apr 30 -- The UK dating services industry is worth an estimated £600 million a year and, according to Hitwise, there are more than 1,300 dating sites in operation. Meanwhile, Jupiter Research predicts the number of paying members of dating sites will reach 6 million in the next three years, rising from 2.6 million in 2006. In the midst of such vast anticipated growth, two of the biggest players — Meetic, which owns Dating Direct, and IAC, owner of Match.com — have agreed to a deal.

Industry reaction to the owners of Match.com and Dating Direct getting into bed together seems to be one of general puzzlement. IAC plans to sell its European operations of Match.com to Meetic in return for €5 million (£4.5 million) and a 27% interest in Meetic. So why would the world's largest dating site suddenly decide to sell its profitable European operation? Ross Williams, co-founder of WhiteLabelDating, which powers dating sites for publishers, sees the strategy behind the decision. "There was a clause in the announcement that didn't make many of the headlines, but I think will tell you the direction IAC is going in: Match has the option to buy Meetic in its entirety in about three years. So this is kind of phase one of setting the limits of both businesses."

There's a general feeling in the industry that the Meetic/IAC deal will be just the first of a number of unions in a sector that has hundreds of competitors. Markus Frind, founder and CEO of free dating site Plenty of Fish, believes we'll see more forced marriages in the UK market. "A lot of dating sites have been losing traffic over the last two years and some aren't even profitable; that can't go on forever," he says. But it seems the economic squeeze isn't impacting the bigger players in this sector. eHarmony launched in the UK last October saw an almost 2% increase in the number of pages people viewed on days when the Dow Jones was down 100 points or more. Match.com has also seen a 35% increase in sign-ups since the beginning of the year.

With so many players in the market, differentiating each dating service arguably comes down to how effectively sites match individuals. While approaches differ slightly, no one player seems to be doing anything radically different. Online dating service Parship claims to have been the first in Europe to offer a scientific approach to matchmaking, with its psychometric compatibility test, taken by more than 9 million people to date. eHarmony uses an in-depth 250-question questionnaire based on 35 years of clinical psychology research. Tapping into this trend, Match.com launched its work-in-progress personality test in December 2008.

Another growth opportunity for the buoyant dating market is the 'second' generation of single people, who are gradually putting their trust online. WhiteLabelDating, which runs Fun at Fifty, has seen a "massive increase" in the popularity of its over-50s dating site. Launched in October 2008, user numbers have risen each month, with March 2009 showing visits up by 47% on the previous month.

The full article was originally published at New Media Age, but is no longer available.

FINANCIAL TIMES -- Apr 30 -- Barry Diller is looking to expand his internet dating empire, hoping to capitalize on a boom in the number of people looking for love online in uncertain economic times. Mr. Diller, Chairman and CEO of IAC, which owns Match.com, was “very interested” in Yahoo’s personal ads operation, he said as he unveiled first-quarter figures showing a healthy 6% underlying rise in revenues at Match.com. Yahoo would not comment, but analysts say it may outsource Yahoo Personals. The modern way of matchmaking generates $1.8 billion in revenues in the US, MarketData estimated earlier this year.

The full article was originally published at Financial Times, but is no longer available.

A New Era For UK Asians In Online Dating

PR WEB -- Apr 29 -- When the UK’s largest Asian singles events company launched an online date site exclusive for UK based Asians, AsianD8online.com was born, and has become one of the UK’s fastest growing niche sites. Director of AsianD8online, Sujan Shah, explains that this site is different because of the amount and quality of content you get for the money, the invitations to their live singles events, and that they specifically cater to UK Asians only. “This is why all our members are personally approved by our staff and not computers and if any new members are based outside the UK, then their profiles are rejected" Shah said. The site was launched in November 2008.

The full article was originally published at PR Web, but is no longer available.

BUSINESS WIRE -- Apr 29 -- iovation, The Device Reputation Authority™ for the Internet, announced today that it is now offering iovation Risk Module, an add-on service to iovation ReputationManager that scores new and unknown devices on the Internet. iovation has been helping their customers combat online fraud and abuse since 2004 by using device fingerprints to create device reputations that can be provided to iovation customers in real time. Now customers can not only act on the reputations for devices known by the iovation network, they can also receive risk scores for new devices that match the profiles and behaviors of devices associated with fraud and abuse. FULL ARTICLE @ BUSINESS WIRE

See all posts on iovation

TIME -- Apr 29 -- The economic downturn has nearly frozen the job market in China, and the situation for college graduates with no work experience is not looking good. For that reason, an increasing number of female college seniors are turning to matchmakers, seeking marriage as a buffer from temporary unemployment. Government statistics released earlier this year forecast that by the end of February, only 35% of the 6.1 million students who will graduate from college this year would have found a job. Matchmaking agencies across China are enjoying a sudden boom as a growing number college seniors are signing up with for their services. Beijing Marriage Introduction Service, a matchmaking service organized by the official city women's association, has taken note of the sudden increase in college student members. "We have received lots of registration from college girls during the recent months. Many of them are still in school," the company recently told Chinese media. In some cases, it's other students who are peddling the service. Xiaoyuanlove.com, which translates to "love on campus," was founded by a group of recent university graduates in Shanghai who saw the business' huge market potential. Many in China have responded to the trend with indignation. FULL ARTICLE @ TIME

VIRTUAL WORLD NEWS -- Apr 29 -- Viximo has restructured, with some employees let go last month and former CEO Rob Frasca replaced by Dayna Grayson (of Viximo investor North Bridge Venture Partners) as acting CEO. Viximo closed a new round $5m round of funding from North Bridge and Sigma. Perhaps most importantly, the company is refocusing itself around a new virtual goods strategy: providing content for partners to sell.

The full article was originally published at Virtual World News, but is no longer available.

See all posts on Viximo

ASSOCIATED PRESS -- Apr 27 -- Before IAC reports earnings for the first quarter on Wednesday before the market opens, a report of key developments and analyst opinion was released. January saw the launch of Match.com’s free dating site, DownToEarth.com, which is aimed at the under 28 crowd. Online city guide CitySearch had dealings with both Facebook and MySpace, launching a revamped version of the site that incorporated Facebook Connect, as well as MySpace Local, which will combine the vast database of CitySearch with MySpace’s user base. IAC also said it would sell Match.com's European operations to France-based online dating company Meetic for a 27% stake in Meetic and a promissory note for 5 million euros ($6.6 million). Analysts expect first-quarter earnings of a penny per share on $329.7 million in revenue.

The full article was originally published at Forbes, but is no longer available.

WLD BLOG -- Apr 27 -- According to the New Media Age report, White Label Dating is now the second largest paid dating site in the UK, and the folks at WLD could not be more excited! “With the effective merger of Meetic and Match this now means that we’re the number 2 paid dating site in the UK…experiencing greater growth than all of our competitors over the past year with visitors up 205%. It’s no wonder our partners want to choose the most successful platform in the industry!”

Shared Qualities For A Successful Relationship

WASHINGTON POST -- Apr 24 -- The Washington Post recently conducted an interview with psychologist Gian Gonzaga, lead researcher inside eHarmony Labs, the online dating service’s think tank. Gonzaga stated that the core qualities partners should share if they want their love to last are primarily personality traits, such as temperament, openness to experience, how introverted or extroverted each person is, etc. He also stated that the literature does not support the adage "Opposites attract", and claims that after running the numbers, eHarmony is responsible for 236 people getting married each day, or 44,000 couples a year. FULL ARTICLE @ WASHINGTON POST

Thanks to Our Sponsors 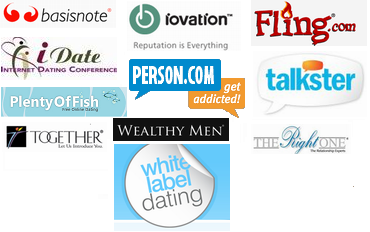 Looking For Love And Finding AIDS

ABC NEWS -- Apr 24 -- Social networking sites connect friends, serve special interest groups and make it easier than ever before to stay in touch. But when the Internet is used for anonymous and unprotected sex -- that touch can turn toxic. Some fear that online chat rooms and dating sites are becoming today's virtual bathhouses, where HIV/AIDS first percolated among gay men in the 1980s. More new infections occur among young people ages 13 to 29 than any other age group -- precisely the demographic that uses the Internet for social networking. Public health professionals are turning to social networks as a tool to combat the high numbers of HIV/AIDS infection. Manhunt was the first dating site to address sexual health in 2002 with partner notification, outreach and research services on its Manhunt Cares page. Its directory lists hundreds of health clinics around the world where men can get face-to-face help. FULL ARTICLE @ ABC NEWS

See all posts on Manhunt

Online Dating Takes An Upward Turn As The Recession Bites

NEW MEDIA AGE -- Apr 23 -- Since the onset of the recession in September 2008, online dating sites have been attracting new users like they were going out of style. In the UK, traffic to online dating sites grew 13% between September 2008 and February 2009, to attract just shy of 5m visitors and a reach of 13% of the total UK online population. The appetite for love apparently has been re-ignited from the ashes of consumer-capitalism, and continued site growth is expected into 2009. The most popular online dating property is currently Meetic, which attracted an unduplicated 1.4m visitors in February in combination with newly acquired Match.com.

The full article was originally published at New Media Age, but is no longer available. 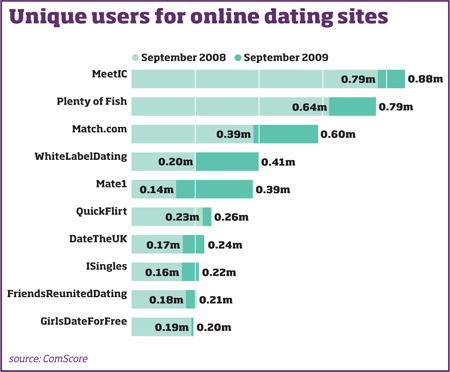 OC METRO -- Apr 23 -- According to a recent report from UC Irvine, those who partake in online dating tend to observe racial stereotypes when searching for a mate. White men prefer Asian or Latina women, and white women prefer African-American and Latino men. The study suggests that white people hold the power when it comes to interracial dating. It is believed that the portrayal of racial stereotypes in film and television contribute to the dating preferences noted in the study.

The full article was originally published at OC Metro, but is no longer available.