ONLINE DATING SOUND BARRIER - Aug 25 - Jazzed is a new free dating site and it will always be free for ever. Jazzed is designed to leverage eHarmony  and is going to compete with PlentyOfFish and OKCupid. PlentyOfFish and OKCupid are freemium sites, but at Jazzed, they suggest to upgrade migrating to eHarmony. FULL ARTICLE @ ONLINE DATING SOUND BARRIER

Romancing The Phone: Mobile Dating Climbs As Summer Heats Up

PR NEWSWIRE - Aug 25 - According to Ground Truth, the mobile media measurement firm, the number of visitors to mobile dating sites increased by 92% from the first week in June to the last week in July. Flirtomatic, a mobile-optimized dating site, is the category leader, accounting for 65% of the audience for mobile dating. match.com and eHarmony are less frequented on mobile, ranking at 7 and 17, respectively, for the same time period. FULL ARTICLE @ PR NEWSWIRE

See all posts on Flirtomatic

COMPUTER BUSINESS REVIEW - Aug 25 - Ross Williams is CEO of what's claimed to be the largest privately-held online dating firm in Europe, Global Personals. His company's sites get 6M visitors a day and last month there were ~85M unique page views. Williams's platform supports some 4K individually branded sites as he runs a white label service. Some of online dating issues are explored critically in a documentary - 'Wink, Meet, Delete'. An independent Scottish film-maker Sue Bourne chose to sum up her exploration of this world. Users of Internet dating sites sometimes complain there are huge problems with fake profiles and scammers. Williams says there are issues in the industry but that his firm takes great pains to avoid them. For us, customer service is paramount so we take care to try and prevent this as much as possible.

MARKET WIRE - Aug 24 - Spark Networks is launching Believe.com, a new faith-based content destination serving the Christian community. "Based upon member feedback, it became clear there was a need for a content destination site where devoted Christians could obtain advice, insights and interaction with other community members," said Garry Poole, Advisory Board Member of ChristianMingle.com, which is owned and operated by Spark Networks.

PLENTY OF FISH BLOG - Aug 24 - Jazzed.com is eHarmony’s new site. Given that Zoosk supposedly now has revenues of over $10M a month up from next to nothing last year this is something I expected… Expect a lot  more action coming from the top dating sites.

The full article was originally published at PlentyofFish blog, but is no longer available.

BUSINESS WIRE - Aug 24 - A recent Pew Research Center survey finds that a sense of humor and a similar cultural background are the characteristics people value most when looking for a soul mate. According to a survey of 1,000 Americans conducted for People Media, fully three-quarters of the population believe a sense humor or a common cultural background are paramount for relationship success. The other most important factors when choosing a relationship partner are:

See all posts on People Media

Lavalife Reveals The Fate Of The Turkey Baster

PR NEWSWIRE - Aug 24 - The new movie, "The Switch" starring Jennifer Aniston and Jason Bateman tells the tale of a 40-year-old woman who wants to find the "right" sperm donor and have a baby on her own. Lavalife asked singles: "Would you donate your sperm or eggs for a friend who wanted to have a baby?" 63% of men and 48% of women surveyed said yes. A recent article by Lisa Daily in Lavalife's online magazine, "Click," discusses how smart women are choosing to have children by themselves in record numbers. According to the 2000 Bureau of the Census, non-marital cohabitation, separation, and divorce have become more common, as has remarriage. Half of all children in the US lived or will live with only one parent before reaching adulthood. Most one-parent families (86%) are headed by mothers. FULL ARTICLE @ PR NEWSWIRE

Single? You're Not Alone

CNN - Aug 23 - There are 96M people in the US who have no spouse. 43% of Americans over 18 are single, and 61% of them have never said 'I do.' ~46% of all households nationwide are maintained by a single person. More than half of the unmarried Americans are women. And for every 100 single women, there are 88 unmarried men available. There were 904 dating services available as of 2002, employing ~4,300 people to help the single folks find each other and the companies collected $489M that year. FULL ARTICLE @ CNN

GUARDIAN.CO.UK - Aug 24 - eHarmony claims to be responsible for  542 weddings every day in America. eHarmony CEO Greg Waldorf hopes to repeat that trick in Britain, where eHarmony launched 18 months ago and aims to be market leader among paid matchmaking sites within the next two years. eHarmony says it has signed up a million registered users in 18 months. But the site faces a crowded market – according to Experian Hitwise, it ranks only 11th in traffic among UK dating sites, with 1.79% of visits. That compares to the free-of-charge market leader Plentyoffish, which accounted for 18% in July. FULL ARTICLE @ GUARDIAN.CO.UK

Andrew Conru, The Engineer Of Love 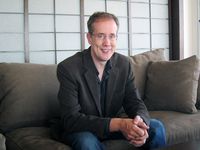 IEEE SPECTRUM - Aug 24 - Andrew Conru is the reclusive founder of FriendFinder, the largest network of dating sites, with more than $300M in annual revenues. He wants to build the virtual-reality restaurant inside an empty retail space in a trendy part of Seattle. Diners would eat in a real train car, with changing scenes from exotic locales projected on the windows—videos of Kyoto with your sushi, for example—as the train shakes and shimmies to simulate forward motion. "When Conru sees inspiration, he’s very quick to react,” says Mark Brooks, a social networks analyst for Online Personals Watch. In 1994 Conru built Dining.com, one of the first Web sites based on collaborative filtering. User reviews and preferences were used to recommend restaurants to other users. Later in 1994, Conru decided to apply collaborative filtering to a problem in his own life—getting a date. The result was Web Personals, the first dating site, which he sold in 1995. This became the basis for the FriendFinder network, which he launched in 1996. Penthouse Media Group bought FriendFinder in 2007 for $500M and renamed itself FriendFinder Networks. In 2008, FriendFinder filed for an IPO, hoping to raise $460M. By 2010, that amount was down to $220M. Finally, earlier this year, FriendFinder ”indefinitely shelved” the IPO. FULL ARTICLE @ IEEE SPECTRUM

PRESS RELEASE - Aug 23 - According to ComsCore, casual dating site C-Date ranked as #2 dating site in Germany with 564,000 unique visitors in June. C-Date is available in 35 countries and has over 3.1M registered users with 10,000 new users registering each day. In Oct 2009 Nielsen Online also ranked C-Date as #1 dating site in Spain as well as #3 in France and Switzerland.

The full article was originally published at Open PR, but is no longer available.

PRESS RELEASE - Aug 23 - Tastebuds.fm is a brand new music dating website that matches potential partners based primarily on their tastes in music. It integrates directly with Last.fm, allowing users to plug in their username and immediately populate their profile. There’s also the option to manually input your favourite bands when searching for matches. FULL ARTICLE @ RESPONSE SOURCE

What Scientists Are Learning From Online Dating

BOSTON GLOBE - Aug 22 - OKCupid has begun publishing statistics about its users’ behavior on its blog OKTrends, and using the numbers to generate real-world advice. For example: Men get more responses from women if they don’t smile in their profile pictures and women are more likely than men to send messages to people they don’t find attractive. The blog has also uncovered some trends about lying: All users add an average of two inches to their height and a 20% raise in salary. OKCupid can also analyze user communications to see what works and what doesn’t. The word choices most likely to kill your chances of getting a reply are bad grammar and “netspeak,” like saying “ur” for “your.” Dan Ariely, a behavioral economist, used data from a different website to analyze which attributes determine the success of men and women in getting responses from the opposite sex. For both sexes, the attractiveness of the photo was the most important trait. Beyond that, men’s height was the most important feature to women. FULL ARTICLE @ BOSTON GLOBE

Marketing Affairs: How To Advertise Paramours

MARKETPLACE - Aug 19 - Noel Biderman is the president a company called Avid Life Media, which runs a bunch of niche dating sites. There's CougarLife.com for older women and younger men, HotorNot.com and AshleyMadison, a dating site for married people for which Noel has gotten a lot of attention. Noel buys traditional ads where he can. But of course, a lot of big media companies won't take ads from Ashley Madison. His response? Fine. He goes to plan B -- decrying them in the press for being unreasonable. Avid Life pulled down $30M in revenue last year.  Introducing cheaters to each other online has afforded Noel a pretty comfortable life. Noel does tend to defend his business with various theories and arguments about the future of matrimony and where we're headed as a society. But in the end, he says it really is all about the money. There's no way he'd be doing this otherwise.

The full article was originally published at Marketplace, but is no longer available.

DW WORLD - Aug 20 - Every month ~7M German singles are active on online dating sites. And with over 2,000 German online dating sites, it would seem that these singles are spoiled for choice. This, however, isn't necessarily the reality as the public loses track of which sites are actually useful, according to Henning Wiechers, CEO of Singleboersen-vergleich, an online portal that rates dating websites in Germany, Austria and Switzerland. Although many areas of e-commerce tend to be dominated by large American companies, Wiechers said 7 of Germany's top 10 online dating platforms are "made in Germany." Hamburg-based ElitePartner targets high-income singles with a university education. ElitePartner's last year's turnover was over 20M euros ($25 million). Other leading websites, like FriendScout24 said it registers thousands of new members every day. FULL ARTICLE @ DW WORLD