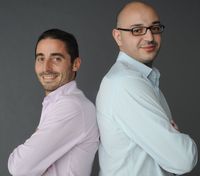 OPW - Dec 30 - Mektoube.fr is a dating site dedicated to the Muslim and Maghreb community in France. We have interviewed its founders Laouari Medjebeur and Thomas Nomaksteinsky. (See full version in French).

Mektoube.fr has constantly expanded since it was launched in 2006, how do you see its future in France?
We are still expanding. Half of our new members come by word-of-mouth.

For any markets, the short-term future is on mobiles. Currently, 20% of our traffic comes from our Web application. We are developing platforms for Android and iPhone.

The online dating market is experiencing a massive growth, how is Mektoube.fr different from others?
French niche market, as well as the French web itself, is fairly specific. Most of the dating sites are too small and will not reach a significant size. There aren’t many major dating sites. There is jDate but it is run by an American company. There is nothing for the Black community.

Mektoube’s users are part of the French Maghreb “community”, although this is not one group but French people of North-African origins, who share common traditions.

Mektoube.fr is currently number one dating site for the Muslim and Maghreb community, how do you promote the site?
We ran a casting via Facebook to find our next models for our advertising campaign.

We also launched a TV commercial campaign in July and it worked well, so we’ll probably do this again.

The "communitarian drifting" potential issue has been raised. How do you respond to these concerns?
The development of websites aiming at communities has raised questions regarding any potential communitarian drifting. Mektoube.fr itself saw one of their advertising campaigns rejected because of the risks implied by possible misunderstandings over the contents of the ad itself. Yet Mektoube.fr never used, and will never use, religion as a commercial argument.

What are your projects at an international level?
Mektoube.fr will soon be launched in North African countries.

Your website mostly aims at French people originally from the Maghreb area, how are you planning to export the concept around Europe?
As for Europe, the Maghreb diaspora is a phenomenon specific to France, other countries mostly having only first or second generations of migrants. The Maghreb diaspora in Belgium has a similar structure as in France, but the market is too small to justify a move.

There are two major points that make the online dating market different. It is more difficult to sell a service that implies feelings than actual goods. On the other hand, good e-shops can build on costumer loyalty, whereas dating site users will not come back once they have found love. As a result, the goal is to provide the best services possible so that the word-of-mouth brings more members in.

PR WEB - Dec 30 - DivorcedDate.com, a dating site for divorcees has revealed the Top 10 reasons why UK married couples divorce. The site surveyed 5K of its members on why their marriage failed. The top answer was ‘Financial Issues’ followed by ‘Lack of Communication’.

WLD - Dec 28 - With the mobile market worth an estimated £152 Billion in 2011, the world of mobile is big business. Mobile traffic is plentiful and relatively cheap. cquisition cost is up to 50% lower through mobile than desktop channels and WLD has found that 16% of their traffic is already accessed through handheld devices, even without a dedicated mobile platform. The mobile platform features are:

See all posts on WhiteLabelDating.com

One Week Left To Vote For The iDate Awards

WEBWIRE - Dec 28 - January 4th is the final day for the public to vote online for the 3nd annual iDate Awards. Voting is online at http://www.idateawards.com. Industry professionals and the general public are encouraged to vote. The winners will be announced during the 9th annual Miami Internet Dating Super Conference.

12 categories exist for the awards:

The awards are organized by the Internet Dating Conference and Online Personals Watch.

Nothing Fishy About This Office Christmas Party

FINANCIAL POST - Dec 27 - Making new hires feel at home is the key to growing business. The founder and owner of one of the world's biggest dating sites, Plenty Of Fish, piled 40 staff members into a couple of limousine buses and drove them to Whistler for a weekend of fun and frivolity in the snow. There, the members of the Plenty Of Fish "work family" spent two days and nights cross country skiing, zip trekking, snow tubing, exchanging gifts, enjoying fancy restaurant dishes and staying in penthouse suites at the resort's top hotel. Frind says the expense, the amount of which he won't reveal, was worth it. Plenty Of Fish is growing and he needed to integrate some new hires into the family. It can be tough to find good developers in Vancouver so "when you find good ones, you want to hold on to them," Frind says. Also, happy employees create good office morale. That's why Frind, only 33 himself, joins his team in pursuits outside the office. (Full Disclosure: POF is a client of Courtland Brooks.)

by Tony Wanless
The full article was originally published at Vancouver Sun, but is no longer available.

Why Can't Women Have Grindr Too?

GUARDIAN.CO.UK - Dec 27 - Grindr is a smartphone app that allows men to find each other for "dating, socialising and friendship". Nearly 3M men are signed up globally, and the UK is one of the biggest markets. The people behind Grindr have been promising to create a version for women who want to find women. But it hasn't turned up. They've released Blendr, which says it's for "straight and lesbian" users but it's really a male-female app with no focus on queer women. Have other apps jumped on the Grindr bandwagon? Yes, but the ones aimed at queer women have mostly fallen off it again. There's Qrushr Girls but its address now redirects you to an insurance site. There's another called Brenda, but a recent iPhone app review complains that most of the people using it are men.

PATCH - Dec 26 - "This time of the year, and Valentines, people start thinking about it, about finding their lifelong match," says Lynn Woolf, spokeswoman for FarmersOnly.com. FarmersOnly is based in Pepper Pike, Ohio. The site claims to have grown from 2K members five years ago to ~150K today. It's stated slogan: "Because city folks just don't get it". The idea is simple. Farmers and ranchers, male and female, have the need to meet eligible singles just like their city counterparts. Yet out in the country, socializing is a little tougher, things spread out as they often are, farmers and ranchers working long hours as they often do, with little time for dating.

See all posts on FarmersOnly

METRO.CO.UK - Dec 26 - ~6M British people are set to take to the internet to find love during the festive season in the biggest week of the year for online dating. According to Match.com one in ten Brits is likely to browse a dating site between now and 2012. Meanwhile US-based dating sites also expect a boost in traffic over the next week as hopefuls look to find someone to share New Year's Eve with, as well as forthcoming events such as Valentine's Day.

The full article was originally published at Metro.co.uk, but is no longer available.

NEW YORK DAILY NEWS - Dec 25 - “From Dec. 26 to Feb. 14 is our busiest season,” says Whitney Casey, Match.com’s relationship expert. “New Year’s Eve is such a big deal because it’s a new beginning,” she explains. “If you’ve had a bad time dating last year, there’s just so much optimism in the air for the new one.” Plentyoffish.com reports a 15% jump in signups for its free dating site this time of year, coupled with a 20% spike in activity from current users, “many of whom are looking for a date for New Year’s Eve,” says rep Shannon Smith. 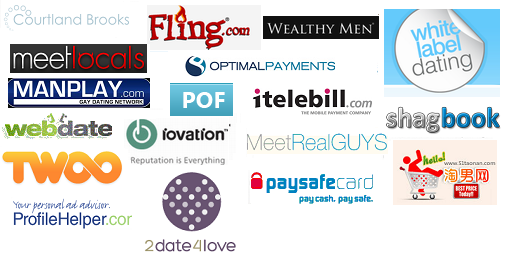 MARKETING WEEK - Dec 22 - eHarmony is launching its first ever marketing campaign produced in the UK as it steps up efforts to take on its rivals. The £1M campaign, which launches on Boxing Day, is aimed at UK singles who are looking for life partners. TV creative will feature a single girl going about her day-to-day activities. At the end she is pictured with her eHarmony partner, while a voiceover says: “Being single can be amazing, so if you’re going to give it up, it has to be for someone who makes being a couple the best thing in the world”.

Poll Results: Is The On-line Dating Industry On Top Of Controlling Scammer Fraud?

OPW - Dec 22 - Scammers are a serious problem and dating sites put a lot of effort in fighting them - but is it a victorious fight? We asked our readers about this and here is what we found out. We got 53 answers to the question: Is the on-line dating industry on top of controlling scammer fraud? 74% of the respondents said no - that´s an alarming number, what do you think? Let us know in the comments.

Our next question: How important is Valentine's (Dec-Feb) season for your online dating business (revenue rise)? 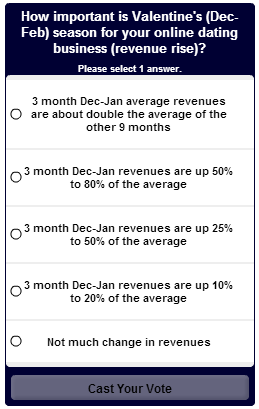 MARKETWIRE - Dec 22 - Spark Networks, owner and operator of dozens of online communities including JDate.com and ChristianMingle.com, is sharing the love by donating ~$32K to Tuesday's Children, a non-profit family service organization committed to serving those impacted by the events of September 11, 2001 and terrorist incidents worldwide.

See all posts on SparkNetworks

Online Sites For Dating Prisoners On The Rise

THE GRIO - Dec 21 - Sites with names like inmatepassions.com act as bridges that transform long-distance friends into lovers. Arlen Bischke started a prisoner pen-pal site called meet-an-inmate.com in 1998 to help prisoners connect to the outside world. "Correspondence with a stranger can give prisoners something to look forward to and help their moral", said Bischke. The online prisoner dating industry has grown from humble beginnings 1996 into a robust market today. Leading sites boast "between 7K - 10K profiles featuring prisoners seeking to connect. ABC News reports that there are over a dozen major prison dating sites.

by Alexis Garrett Stodghill
The full article was originally published at The Grio, but is no longer available.