WEBWIRE - May 14 - Ralph Ruckman and Ryan Gray will cover marketing strategies for mobile dating at the West Coast iDate Mobile Dating Conference. The event takes place on June 20-22, 2012 at the SLS Hotel in Beverly Hills, CA.

UP TO DATE - May 14 - Match.com is launching seven games lasting one to five minutes that will allow members to figure out whether they have chemistry with each other before going out on a date.

See full article at Up To Date

Skout Is About To Take Over The World

BUSINESS INSIDER - May 13 - Christian Wiklund, CEO of Skout, wants to build a global network on the scale of Facebook and Twitter. Skout is adding 40k - 50K new users on the app every day. Dating and flirting only comprises ~20%t of Skout's use cases. Most use it to just meet new friends.

Q: What are you focusing on now?
CW: To build a global network for meeting new people.

Q: Things weren't always doing this well though.
A: It's really in the past year that we've really taken off. A year ago we were signing up 100K per month. Now it's 40-50k users per day.

Q: What are you using the money you've raised for?
A: I don't want to take one market by market, I want to push everything as quick as possible. We need more engineers, iOS developers and back-end developers.

Q: A big focus now seems to be dating. Will that change?
A: Our lates survey found 80% were now using it for finding new friends, 20% for dating. It's a place people go to socialize. Will there be flirting? Yes. Will there be friendships made? Yes.

Q: What's are the goals for this year?
A: Keep pushing the product forward.

Q: Do you still expect to make money if you shift the focus away from dating?
A: Skout is free. We charge for extras such as seeing who checked you out. My bet is that it's still gonna work.

OPW - May 14 - The Badoo ads are all over NYC. I snapped these while shuttling between my hotel and NYC Internet Week. 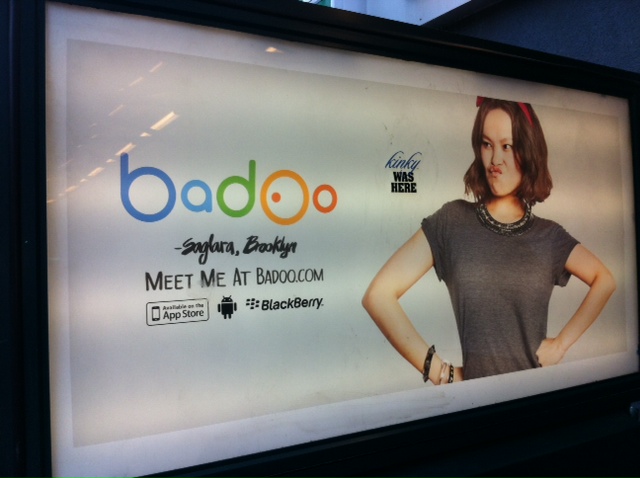 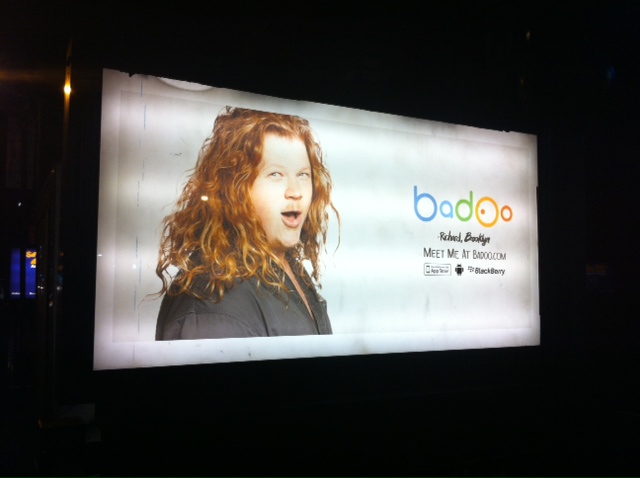 What do you think?

From our esteemed Courtland Brooks clients:

INDIA KNOWLEDGE WHARTON - May 11 - Anupam Mittal laughs at any suggestion that he is the worst advertisement for his company. At 39, he is founder and CEO of shaadi.com, and he's a bachelor. Shaadi recently celebrated its 15th anniversary. The site controls ~40% of the US$1 billion Indian match-making business.

Q: You started Shaadi at a time when most people in India did not have Internet access. Why?
Anupam Mittal: I was living in the U.S. in the mid-1990s. The Internet was starting to boom in the U.S. While sitting in my father’s office in India, I met one of those traditional matchmakers who was trying to match me off. It struck me that we could put all this on the Internet. In 1997, we launched the first version called sagaai.com. [Sagaai = engagement]. In 2001, I quit my job in the U.S. and moved back to India, and we changed the name to shaadi.com.

Q: When did you get your first round of funding?
A: Mittal: We didn’t need to raise external capital until 2006. We raised capital from Sequoia, Silicon Valley Bank and Intel. By then, I’d also started a mobile application company called mauj.com. We raised US$20M between shaadi and mauj.

Q: What is your revenue model? Is the company profitable?
A: At a basic level the site is free. You pay when you find somebody you want to communicate with. It can range from $60 - $400 depending on the service you choose. We’re profitable.

Q: When are your investors planning an exit?
A: The life of a fund is~10 years. When you’ve invested for six years, you start to talk about what’s the best way to exit.

Q: Who is your typical client?
A: 20% are Indians outside the country, but 80% come from within the country. We see people who make $4,000 a year and those who make hundreds of thousands of dollars. That’s why we have services that cater to different people. Our customer acquisition cost is low because we get a lot of direct referrals.

Q: Do you consider Bharat Matrimony as your competition?
A: They're stronger down south; we’re stronger up north.

Q: Shaadi has extended to mobile, television and DTH [direct to home satellite television]. How successful have those been?
A:  DTH didn’t work. DTH is for entertainment. Mobile is working brilliantly. I wouldn’t be surprised if in the next 12 months, 20% of all our interactions happen on mobile.

THE DAILY BEAST - May 11 - MissTravel.com links ‘generous’ men with pretty women who wish to travel the world for free. Since its launch three weeks ago, the site has accumulated ~40K users, as well as a wealth of controversy. Gawker labeled it “the #1 prosti-travel website,” alleging it’s no more than a front for prostitution, while sites like Jezebel have questioned the safety in traveling to the other side of the world with a complete stranger. “There’s a big difference between running a dating site and being a pimp,” says MissTravel.com's founder Brandon Wade. “I don’t make money from the money that the women get from the Sugar Daddies, nor am I promoting prostitution in any way. I’d like to think of myself as a telecommunications service provider more than enabling a specific lifestyle.” Regarding the safety issues, the site relies on member feedback for vetting potential psychos, and will, according to Wade, introduce a background check/criminal history option over the next month for a fee.

by Marlow Stern
See full article at The Daily Beast

HUFFINGTON POST - May 10 - What would the future of online dating look like if we were able to meet people online without having to describe ourselves in 100 words? Perhaps like music site Tastebuds.fm & Spotify's app. The app integrates with Spotify, scanning users most frequently played music showing them people nearby who have similar music tastes. They can browse prospective dates, listen to their matches' favourite music and send them messages. Tastebuds.fm & Spotify have found that 43% of first messages get a reply.

WLD - May 10 - Global Personals acquires Smooch, the 7th largest dating site in UK (Experian Hitwise), alongside its parent company WooWise. The acquisition also includes Mancentral.com, which will help Global Personals grow its gay dating division. Martin Bysh and Marcus Hamilton will remain as advisors to the business. The financial terms of the purchase were not disclosed.

SUBSCRIPTION SITE INSIDER - May 10 - Are you collecting data from your members? If so, you're going to want to know how a slew of recent government crackdowns can affect your subscription business. Attend Subscription Site Insider Webinar with legal expert Lisa Dubrow, who will review:

The seminar is taking place next Tuesday, May 15th.

PR NEWSWIRE - May 10 - "POF.com is the top site in Brazil after entering the market in September 2011", says Markus Frind, POF founder and CEO. POF.com reports that ~80K members are actively using POF in Brazil each day, and an increase of 64% in site visits since January 2012. 5.6M Brazilians visit online dating sites each month, and that number is on the rise, according to comScore.

PRESS RELEASE - May 10 - eDarling, FriendScout24, Neu.de and Parship voluntarily committed to comply with rules (SPIN Kodex) that Federal Association of the Digital Economy (BVDW) put together to protect their customers. The "SPIN Kodex" defines clear rules related to cancellations policy, recurring payments and privacy issues. All parties must take all necessary measures to prevent fraudulent or criminal misuse of their platforms by third parties.

PR WEB - May 9 - There are 25K Jewish singles ages 20-39 in Boston. JBoston will be different from a typical dating site. It combines online profiles with the personalized touch of a matchmaker who gives phone consultations to their members to understand their dating needs. JBoston partners with JRetroMatch.com, for the use of their matching technology.

Meexo To Present At The Next iDate In June

WEBWIRE - May 8 - Meexo will present at the 9th annual West Coast Mobile Dating Industry Conference. The event takes place on June 20-22, 2012 in Beverly Hills at the SLS Hotel. Romain David, CEO and Co-Founder of Meexo will provide a presentation on mobile dating and social discovery.

Mark Brooks: I just interviewed Romain for OPW, and am interviewing the CEOs of all the top mobile dating apps. After iDate we'll run a thread of over a dozen video interviews. But the main event is iDate. That's where you'll get a brain-full and be able to meet, learn and share with peers.

See all posts on Meexo