GROWING BUSINESS - Dec 17 - London-based dating site DoingSomething has raised a six figure investment through the Highgate EIS Tech Fund. Launched in 2011, DoingSomething promotes local interesting things to do on a date, such as ping pong or bike riding.

by Abigail Van-West
The full article was originally published at Growing Business, but is no longer available.

See all posts on DoingSomething

OPW - Dec 18 - Andrin, the CEO of mobile dating app MiuMeet sent me a wonderful visualization of user activity on the MiuMeet mobile dating service around the world.  It shows the logins, messages and registrations happening live around the world.  It currently shows 31k messages per hour and 38k logins per hour.  The cross continent activity is quite beautiful to watch.

MARK BROOKS - Dec 17 - Just in case you'd though I'd gone loopy, I thought I'd explain what happened with the Oct 30th article in Venture Beat titled 'Online daters, be warned! 1 in 10 profiles are scams.' I was appalled to find that they attributed an anchor quote in the article to me, stating that it was sourced from my quote in a recent Glamour magazine article. Que?!  This was a clear misquote and I let Christina Farr at Venture Beat know. She immediately corrected her article to quote me as saying “On some dating sites, as many as one out of 10 profiles is a scammer,” which is true to my original quote and what appeared in the Glamour magazine article. I stand by this quote. However, most dating sites do a stellar job fighting abuse and keeping their user-experiences true. Some don't. Some even use fakesters. That's a problem we need to address in order to protect the reputation of our little industry.

AFP - Dec 16 - Since it arrived in Brazil 15 months ago, AshleyMadison has attracted 1M Brazilians, turning this South American country of 194M people into one of the biggest markets. The country has 80M Internet users and is among world leaders in the use of social networks. With 17M subscribers worldwide, the website will gross $120M this year.

The full article was originally published at The New Age, but is no longer available.

See all posts on Ashley Madison 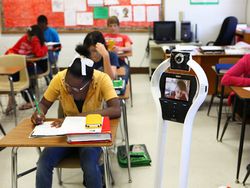 NEW SCIENTIST - Nov 13 - Devon attends Elementary School, as a robot!  He has allergies that prevent him from attending school so he attends from home via his 1.5m tall Segway-like robot called VGo (current price $6k). He navigates between classrooms by peering through a camera and talks via a real-time video screen. Eventually telepresence robots will be controlled by thought alone and transmit a sense of touch back.

Mark Brooks: In ten years women will send their robots to scout out first dates. Robotic surgery and warfare is a reality now.  Next up, remote rendezvous? How will your dating site help? Also see Anybots @ $10k, and DoubleRobotics @ $2k. Still laughing? This is a crazy idea.

Extract from Body Down A Wire: Living your life in remote-control by Helen Thomson

Why Are You Still Single?

MARKETWIRE - Dec 12 - eHarmony helps answer that never ending question from family and friends -- "why are you still single?" They put together 10 of their snappiest comebacks for use at parties, family events and holiday gatherings to get prying family members off your back.  "Why Are You Still Single?"

eHarmony Founder Has His Heart Set On Reviving The Dating Site

LOS ANGELES TIMES - Dec 13 - Neil Clark Warren came out of retirement to take over as CEO. In the last three years, he said, new memberships, retention rates and time spent on the site were all down. eHarmony growth has slowed: Its 2012 revenue is estimated at $275M, up 3.8% from last year. That's down from 2008, when eHarmony saw 16.4% YOY growth. Now, just 15% of eHarmony's staff has been with the company at least five years. Warren wants to make eHarmony a broad "relationship site" that includes services to help users make new friends, find the right job, become better parents, cope with aging and solve interpersonal problems, among others. How eHarmony manages that wealth of member information — users fill out an extensive questionnaire when they join the site, answering questions about their daily habits, likes and dislikes, past experiences and goals — will be the key to whether the new ventures are successful, said Mark Brooks, an online dating industry consultant. "I've seen a few Internet dating companies moving into other areas and failing," Brooks said. "But in the case of eHarmony it makes a lot of sense because they have deeper information on their users than any other company I can think of." Still, Brooks said he doesn't want eHarmony to lose focus on its core business, which "no question should have been a half-a-billion-a-year-revenue company by now."

eHarmony declined to release financial details but said new memberships increased 20% in the last month from the month before. It also said a member's average total amount spent on the site is up 15% year over year.

Google's Most Searched Singles Sites Of 2012

HUFFINGTON POST - Dec 14 - Google Zeitgeist -- the search engine's annual online presentation of the year's top "trending" and "most searched" terms -- includes a list of the top 10 most searched dating sites.

See all posts on Manhunt

WEBWIRE - Dec 13 - Mike Gregory, CEO of Wooyah will speak during iDate’s "CEO Therapy" session. The session covers startups and provides advice from peers. Mike Gregory is a successful entrepreneur and has completed projects totaling ~$5M over the past 2 decades. Mr. Gregory has seen an opportunity in the dating industry and created Wooyah.com. Using patent-pending technology, Wooyah.com allows users to deliver an official “Love Subpoena” that looks and feels like an actual court summons via courier or e-mail to a recipient.

PR NEWSWIRE - Dec 13 - Andrey Ternovskiy launched Chatroulette in 2009.The fanbase exploded to 1+M users within a few months. The site steadily maintained its #1 stronghold among competing video networking sites, including ChatRandom and Airtime. Given that Airtime never gained any traction as a social networking site because its users cannot remain anonymous, it came as a shock to loyal fans when Chatroulette announced multiple changes that have essentially eliminated user anonymity. "Chatroulette announced that you must have an exclusive invite code to sign up -- yet another suicidal mistake. Finally, it now charges your credit card one cent to verify your identity. This totally went against what made Chatroulette huge in the first place -- anonymous video chat. ChatRandom doesn't endorse extreme, unnecessary user verification measures.

The full article was originally published at Sacramento Bee, but is no longer available.

LONDON LOVES BUSINESS - Dec 12 - Lovestruck.com launched in 2010 and is turning over £2.5M. Back in 2006, Lovestruck.com founder Brett Harding was working at marketing agency The Forward Group, and using online dating. “I realised that daters know within a few minutes of meeting people whether or not there was any chemistry. I started meeting people on my lunch break, that way if you’re not interested you have the excuse of getting back to the office.” He also realised that there could be hundreds of suitable partners working in a small radius of where you work. With this in mind he set up LunchdateLondon.com, based on short dates over lunch with people in your working vacinity. He started to look for investment. With $465K in Series A funding on-board – Lovestruck.com was born. Lovestruck.com has been rolled out to other cities including Sydney, New York, Hong Kong and Singapore.

See all posts on Lovestruck

PR WEB - Dec 12 - America’s top matchmaker Janis Spindel collects $1K per click from her new Club JLove men launched on December 4, 2012. “It’s a far cry from my $50K matchmaking fee men have been paying me to meet their potential wives,” Spindel notes. Club JLove men can now attend intimate mini match dinners with 4-5 potential wives at a New York elegant dinner setting. Women have gone through a double screening process and paid a one-time fee of $275 to be matched with Club JLove men. Spindel allows men to see the type of women they can meet for $1K before paying $50K.

See all posts on Janis Spindel