NY POST - May 4 - AnastasiaDate, an Internet service that promises "~15K Russian girls for dating and marriage”, saw a 280% growth in the past year. “I don’t like to think our clients are sick of American women,” says Mark Brooks, AnastasiaDate’s chief strategy officer. “It’s nice to have someone with a different cultural heritage. That can be a huge cause for passion.” An AnastasiaDate “Romance Tour” to Eastern Europe to meet and socialize with the women runs ~$4,795.

OPW INTERVIEW - Apr 30 - This is a very unusual interview.  The CEO wanted to be anonymous. Bang With Friends is growing fast. Here’s their story... - Mark Brooks

When will Facebook be buying Bang With Friends?
I'm not sure they can afford us.

How much is it?
The rumors may or may not be true, but you'll have to ask them for more comments.

Well there was a post I saw and the price was $30 million.
Let's just say we’re in private talks.

Why anonymous?
We're anonymous because we started as a side project. It was a little joke and it's taken off on its own. We were working on other startups at the time and we didn't want to compromise those.

How many are on the founding team?
Three.

Who came up with the idea initially?
It was a team effort between all three of us. We started asking why is online dating so dishonest and so frustrating? Especially for Generation Y. We wanted to make something simple that allows you to straightforwardly say what you were into and what your intentions were. The most obvious case is finding friends with benefits.

So it sounds like you weren’t a fan of internet dating. What sites would you say are your least and most favorite? Are there any which have inspired you? Or inspired you to improve on?
The big guys don't really fit well with what we're doing as a younger generation. Even the new upstarts that we've seen haven't really gotten straight to the point like we have, and taken such an unabashed and simple approach.

How well has Bang With Friends been received by Facebook corporate?
We have a good relationship with Facebook. Of course they are careful with their brand, and we're working with them to make sure that everybody is happy.

You've got 820,000 users and 200,000 couples matched, which seems very high. How do you get so many couples?
A lot of it comes from the safety we provide. Since everybody that you're seeing is a friend of yours, you're much more likely to be interested in them and meet up with them. Also everybody has at least a few friends that they've always had an eye on.

How successful is your app? And take that as you will.
We're happy just enabling more people to bang.

How do you make money?
We don't. We're not worried about making money right now. We're all about the customer.

But you have some aspirations to make money, surely?
I'm sure we'll have some stuff coming out that helps us keep things going, but for the most part our goals here are staying focused on creating success for our users. We know that will drive our business forward.

Where will you be in 12 month's time with Bang With Friends?
You will see us move beyond just banging and beyond your friend group.

DAILY JOURNAL - Apr 29 - Sam Yagan, the 36-year-old CEO of Match.com, was named one of the 100 most influential people in the world by Time magazine. Yagan is listed in the 20-person "Titans" category on the list, among rapper and businessman Jay-Z, Instagram co-founder Kevin Systrom and NBA star LeBron James. President Obama and Pope Francis are among others included in different categories.

by Kyle Garmes
The full article was originally published at Daily Journal, but is no longer available.

PR WEB - Apr 29 - This niche-dating site is dedicated to connecting sports fans for social networking, friendships, and long-lasting relationships. Its core presence will be in the New York metro, but will expand nationally with recent support from financial backers. Members could find a fan gathering, dating match, purchase game day tickets or pick out latest apparel.

LikeIt To Close Down Tomorrow

OPW - Apr 29 - LikeIt, the people discovery service, is shutting down tomorrow (April 30th). The service launched over a year ago by former Match.com executives and received ~1.7M funding from various investors including POF and CrunchFund.

IRISH EXAMINER - Apr 29 - CatholicMatch.com started as local singles forum in 1999 and re-branded in 2003. By 2005, it had become the number one dating site for single Catholics with membership across the world, including the UK, Australia, the Philippines and Europe. Catholic Match is a community where singles can also find friendship, community, support and grow deeper in their Catholic faith.

See all posts on CatholicMatch 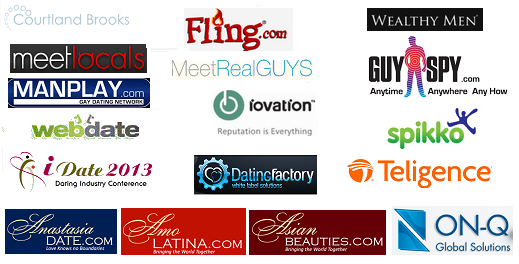 CB BLOG - Apr 26 - The CEO of Match.com, Mandy Ginsberg, just left Match to head Tutor.com. Then we just heard from Art at DatingCoach.org that Chemistry.com is introducing personalized coaching (see image). Is Mandy Ginsberg behind this new coaching element on Chemistry.com? People need help. Match knows it. We know it. But noone has successfully integrated personal high-end customized advice with iDating. We match people, then send them off on their merry way. There's a huge disconnect. We need to be part of the entire relationship continuum by not only helping people with finding suitable people, but also with knowing how to better present themselves, what mistakes to avoid, and most importantly how to keep that person. Internet dating sites should all conduct exit surveys when people opt to leave. Just ask them when they stop paying or want to delete their profile or don't login for a month. That feedback is important for your product design and matching algorithm.  But its also important so you know how to market to that person next.  If they've met someone, start coaching them on how to keep that person.  If they didn't, offer personalized assistance to find out why. What you see with this latest move by Match.com is evidence that they are pursuing this 'holy grail' again, with Chemistry.com.

MENSHEALTH - Apr 25 - International online dating, has been gaining popularity in the past 5 years, according to AnastasiaDate, which has seen a 57% member increase during that time. While the average online dater likes to travel less than 20 miles, the international dater typically treks 2,000, says Mark Brooks, AnastasiaDate’s Chief Strategy Officer. And that opens the door to new women, new experiences, and a new mindset. But while traveling the world and meeting gorgeous girls sounds like paradise, it’s not quite a reality, unless you have tons of cash, and a super-flexible job. A 2011 study found that, on average, New Yorkers stay within a 4-mile radius every day, while people in Los Angeles are tied to a 5.5-mile range. "Even if you stick to your city, you’ll meet new people in different neighborhoods with different routines than you", says Michael Cunningham, PhD, a professor at the University of Lousiville.

Dating Market In The Netherlands: 20% Had A Relationship That Started Online

DATINGINSIDER.NL - Apr 18 - One out of five people in The Netherlands had a relationship that started online, according to dating site Lexa.nl. Lexa, part of Meetic group, is the largest Dutch dating site. Other sites include Relatieplanet.nl, Knuz.nl and Paiq.nl.

Q: How you met your current partner online?

See all posts on Lexa.nl

HUFFINGTON POST - Apr 24 - Hornet is a free gay app. Here is the interview with Hornet's CEO and co-founder Sean Howell.

Q: What inspired you to create such an app?
A: Aside from my background as an analyst, I am also an activist and really wanted something different than Grindr. We created something that helps people looking for a lot more than just sex, especially with travelers or people who are just moving to a city.

Q: What purposes does Hornet serve other than hooking up, and why?
A: We, the staff at Hornet, are made up of bleeding-heart homos whose backgrounds are VC's technologists and activists. This gives our community a much different feel. People are also using the app for business networking, to get a job, to explore moving, to plan their vacations.

Q: How do you compare with your competition, like Grindr?
A: I didn't know that that was my competition.

TECH CRUNCH - Apr 23 - Loveflutter is a new dating site powered by Freebase, the 37-million strong open database of people, places and things acquired by Google in 2010 and now part of the search giant's Knowledge Graph. The site connects people based on shared interests. Loveflutter shows you matches who like the same kinds of music, books, movies, TV shows, and sports. Loveflutter can suggest places to go on a date, based on local venues it pulls in from Foursquare. Other features include "Verified Profiles".

THE PRIVATE MAN - Apr 22 - Mark Brooks is both an online dating industry expert as well as the chief strategy officer for AnastasiaDate.

Q: Define international online dating, and differentiate it from the “mail-order bride” concept.
A: The term “mail-order bride” is quite derogatory to women and doesn’t reflect our brand intentions properly at all. We are not in the mail-order bride business. Many users of AnastasiaDate want to meet for love and for serious relationships.

Q: What are some of the demographics of those who choose to use international online dating?
A: 65% of AnastasiaDate's women are in their 20s or 30s. The average age of the men is 41.

Q: What are the top 10 international online dating websites?
A: Here are rankings from Experian/Hitwise:

Q: Have you seen resistance to international online dating?
A: It’s been a controversial subject in the past, but I believe by 2020, it will be a more mainstream topic.

Q: How has the International Marriage Broker Regulation Act (IMBRA) impacted international online dating?
A: IMBRA set out necessary regulations that do aim to protect women from abuse, and I believe the regulations are keeping people safe.

Q: Do you envision any further U.S. regulation on international online dating?
A: To me, IMBRA covers good ground, and self-regulation also makes sense, of course.

The full article was originally published at The Private Man, but is no longer available.