IDG NEWS - Aug 31 - Russian-speaking hackers have breached 97 sites, mostly dating-related, and stolen login credentials. They don't appear to be selling the data just yet. Many of the sites appear to have database flaws known as SQL injection flaws.

Parship And ElitePartner Will Remain Independent For Now

DIE WELT - Aug 30 - Parship and ElitePartner, two German dating sites that were bought by Oakley Capital, won't be merged. "We will see later how the companies can work together. Our intention is to maintain both brands and to sharpen their profile," said Parship CEO Tim Schiffers.

REUTERS - Aug 28 - Ashley Madison has been struggling to sell itself or raise funds for at least three years before the hack, according to internal documents and emails also released by hackers. CEO Noel Biderman was trying to secure a meeting with IAC. "They would be crazy not to speak with us," wrote Biderman in February this year. But one IAC director replied: "They don't want it." The emails also show that Avid Life came close to selling itself at least three times in 2012.

INDEPENDENT.CO.UK - Aug 29 - The dating app Hinge surveyed its users, and found that only 2% stated that they just wanted casual ‘hook-ups’, whereas 63% were looking for relationships and 33% for dates. This has led them to add a new feature: users can disclose their ‘relationship intentions’ on their profile.

TECH CRUNCH - Aug 28 - Avid Life Media CEO Noel Biderman is stepping down. The company describes Biderman’s departure as a “mutual agreement". The company will be led by senior management until a new CEO can be found.

FINANCIAL POST - Aug 28 - In April, Ashley Madison's head of international relations Christoph Kraemer estimated the company's value at $1B, pegging the ratio of men to women in the 30-45 age range at ~50-50. But a data analysis by the Gawker affiliate Gizmodo revealed there were only 5.5M female profiles and only ~12K of them displayed evidence of being connected to actual women who used the site. 10K accounts were registered to ashleymadison.com email addresses, while ~81K appear to have been created on an Ashley Madison computer, based on their IP addresses. If those allegations are true that's likely the last nail in the coffin for the site, said dating company consultant Mark Brooks. "I think people would have forgiven (the security breach). I think they would have gotten over that, as long as they put safeguards in place so it doesn’t happen again," Brooks said. "This, they don't move on from. This means this brand is not trustworthy. That’s a big deal."

Mark Brooks: Alexa tells us that the female population is greatly under-represented and their confidence on this stat is 'high.' 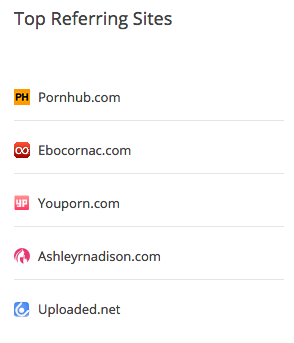 Looks like Ashley Madison falls into a category that I like to call 'High Emotion Entertainment.' Users get entertained. They may well get emotional support. But the chances of much more are slim. Still, there are plenty of users willing to pay for hope. AM proves that point magnificently.

BUSTLE - Aug 28 - Spritzr, which launched today, allows users to refer potential love interests to their single friends via Facebook. There's a leaderboard that shows which Matchmakers are doing a great job at setting up their friends. They can earn bronze, silver, or gold status.

WSJ - Aug 27 - The Royal Canadian Mounted Police and the Federal Bureau of Investigation are investigating the hack of Ashley Madison. Security blogger Brian Krebs thinks he has a clue. A self-described hacker who calls himself Thadeus Zu on Twitter appears to have had intimate knowledge of the hack, has defended the hackers and appears to be a fan of the AC/DC song, "Thunderstruck," which played a key role in the breach. "It's not uncommon for people involved in hacks to have trouble keeping their mouths shut," said Mr. Krebs.

WASHINGTON POST - Aug 27 - Today's college and post-college hookup culture is a byproduct, not of Tinder or Facebook, but of shifting demographics among the college-educated, as the widening gender gap in college enrollment has created lopsided numbers in the post-college dating pool. The dating pool for straight, millennial, college graduates now has four women for every three men. Dating and mating behavior is influenced by prevailing sex ratios, when there are plenty of marriageable men, dating culture emphasizes courtship and romance, but when gender ratios skew toward women the whole dating culture becomes more sexualized.

BUSINESS INSIDER - Aug 27 - This month, hackers of AshleyMadison.com began to leak internal company data online, which also includes sensitive documents and the emails of CEO Noel Biderman. Included within Biderman's email correspondence is a "Management Presentation" for Grindr, created in June 2015. Accoring to the presentation, Grindr is expected to generate $38.1M this year. By the end of 2018, it predicts annual revenues ~$77M. Grindr claims that the average daily time its users spend on the app is 54 minutes daily, compared to Facebook's 42.1 minutes.

DEAL REPORTER - Aug 24 - OPW - Aug 24 - As The Match Group moves toward an IPO, it must use its size advantage to overcome the difficulties that have plagued other dating companies that have gone public. FriendFinder traded on NASDAQ and was delisted in 2013 for failing to trade above the USD 1 level. Zoosk filed for an IPO in 2014, intending to raise more than USD 100m, but withdrew the application citing unfavorable market conditions. In the past 2 years, shares of Snap Interactive have not been above the USD 1 mark with stock plunging 85%, and Spark Networks has seen its stock decline 60%, to USD 3.11. Chinese dating firm Jiayuan International has seen its US-listed stock rise 22% in the last year, however, their success is partly a by-product of China's booming economy. "Match's size will be an advantage over other publicly traded dating entities," said Mark Brooks, an industry consultant with Courtland Brooks. Its scale and brand awareness means it probably pays much less to acquire new users. “This is very clearly a game of size,” Brooks asserted, adding that Match.com does not have to pay search giant Google for every new member because it has built a brand through time, helped by TV and radio advertising.

ChristianMingle Breaks Up With TV Land

ONENEWS NOW - Aug 26 - The dating site has announced it will no longer advertise on the show "Impastor" which is airing on TV Land. That decision comes after OneMillionMoms.com, a division of the American Family Association, launched a campaign urging the dating site to withdraw their financial support.

by Bill Bumpas
See full article at One News Now

AshleyMadison.com's Male Users Were Paying For A Fantasy

GIZMODO - Aug 26 - According to AshleyMadison data released by the hacker group, there were 31M men for 5.5M women. Most of those women had never talked to men on the site, or even used the site at all after creating a profile. Many of the profiles are fake. There were ~10K accounts with ashleymadison.com email addresses which makes it look like they’d been generated by a bot.

AM Members Seek Over $1B In Lawsuits Across U.S. And Canada

WASHINGTON TIMES - Aug 25 - In U.S. District Court for the Northern District of Texas, attorneys say in a 27-page complaint that Avid failed its obligations to abide by best practices and industry standards concerning digital security. In the Central District of California, attorneys filed a similar suit and asked the court to grant class-action status so other members impacted by the "nightmare" brought on by hackers can see relief. Avid Life Media has until Sept. 14 to answer accusations that it failed to safeguard sensitive user data that was dumped online last week. Two Canadian firms said last week that they were bringing a class-action suit against Avid seeking upwards of $760M in damages. Even if Avid agreed to award $100 each to half of Ashley Madison's roughly 37M customers, the company would still stand to lose nearly $2B. Avid earned around $115M in revenue during 2014, according to court filings.

by Andrew Blake
See full article at The Washington Times