FINANCIAL POST - Sep 20 - Three sisters Arum, Dawoon and Soo Kang - graduates of Harvard, Stanford and Parsons School of Design respectively - launched Coffee Meets Bagel, a dating app that has made ~25M connections that have led to ~20K relationships and 200 plus engagements/marriages in the three years since its launch in USA. The app launched in Canada this summer. The app impressed billionaire investor Mark Cuban; he offered them $30M for the business, which has yet to make a profit, when the sisters appeared on Shark Tank this past January. They turned him down. After that, they raised $7.8M in a series A round led by DCM Capital. With no profits to point to, Kang said investors liked the team, the vision and the engagement metrics. The company targets young, busy working professionals between the ages of 21 and 35, which is exactly why the Kangs decided to expand into Canada. The business is based on a freemium model. Users can pay for getting more than one match (bagel) a day or unlocking the identity of a mutual friend.

THELOCAL.DE - Sep 18 - The Dresden-based dating app Lovoo tricks users by creating fake female profiles to tempt men into paying, a technology magazine C'T has claimed. Lovoo is free but users can pay for premium services. Lovoo, which has 36M users in 17 countries has rejected the accusation.

See all posts on Lovoo

Millions Of Women Use Online Dating

QZ.COM - Sep 18 - In general, more men than women use online dating (13% men vs 9% women) in USA, according to 2013 Pew Research Centre study. Ashley Madison is an extreme example of this male-heavy ratio. Prior to the July hack, the site claimed that 30% of its clients were female. But only 15% of the 35M hacked records belonged to women, and it was found AM had created 70K female bots. Sites that promote casual hook-ups and extra-marital affairs are dominated by men but, when it comes to more serious, women are just as interested in online dating. 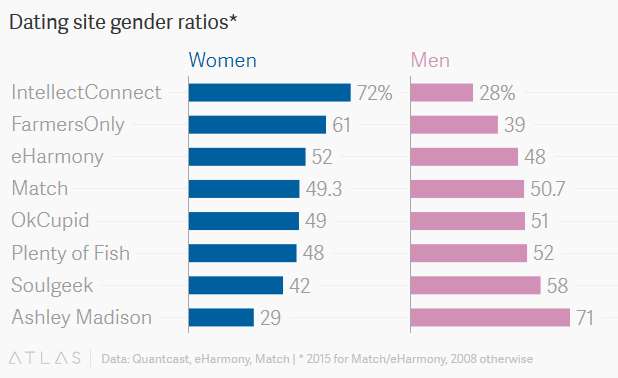 BUSINESSWIRE - Sep 16 - MeetMe, the public social discovery company, has launched native chat ads in its iPhone app and video interstitials in its Android app. "We expect it to contribute ~$1M to Q4 revenue," said Geoff Cook, CEO of MeetMe.

USA TODAY - Sep 19 - Meat processing giant Oscar Mayer has launched Sizzl, a dating app functionally similar to Tinder that matches users based on compatible tastes in bacon. Users rank which cut of meat they prefer, and how they prefer their bacon cooked.

NY MAGAZINE - Sep 16 - A Swedish dating site called 7Heaven only allows profile photos that are less than 6 hours old. It can check timestamps.

Niche Dating Sites Have Sprung Up To Meet Demand

BBC - Sep 16 - GlutenFreeSingles.com was launched in January 2013 by Marcella Romaya, who is also coeliac, and Sheri Grande. Monthly membership costs $23.99; ~57% of members are female and 43% are male, and it currently covers only the US and the UK. "For a niche site to be successful, it must be about quality over quantity," says Trish McDermott, a private dating coach who was on the Match.com start-up team in 1995. Frank Mastronuzzi co-founded OneGoodCrush in July this year out of frustration that larger sites were not catering to the needs of the LGBTQ community. To date, Mr Mastronuzzi has fundraised ~$550K and is in the process of raising an additional $10M. Another niche dating site is DateBritishGuys.com, for American women seeking men in the UK and vice versa. The site currently has 25K members.

Obama Pushes Behavioral Economics Into Mainstream, But Can It Help Internet Dating?

OPW - Sep 17 - My first experience of Behavioral Economics was in 2004 when I met Professor Dan Ariely (Predictably Irrational).  He changed my perspective on iDating forever, and catalyzed my thinking for the next decade.

I started a part-time Exec. MSc in Behavioral Science at London School of Eonomics under Professor Paul Dolan, the author of Happiness by Design.  Wednesday was a very good day for Behavioral Economics as Barack Obama formally recognized it by releasing an executive order mandating the use of behavioral economists work in more areas of government around the USA.  Its worth taking note of this fledgling science.  I'm committed to hiring a small team of world class behavioral economists to augment Courtland Brooks offerings, and I'll be using what I learn at LSE to help the Internet dating and matchmaking industry serve singles more effectively.

A Computer Could Learn When To Swipe Right On Tinder

ITWORLD - Sep 15 - A Canadian researcher, Harm de Vries took 10K photos from Tinder and gave the computer his opinion on 8K of them. The computer tried to determine his likes or dislikes for the remaining images but managed only a 55% success rate. He decided the computer needed more images to choose from, so he pulled ~500K photos from OkCupid. With a greater number of images to work with, the computer achieved a 68% success rate. "It's a pretty good start," he said, "but I think it can be improved a lot." 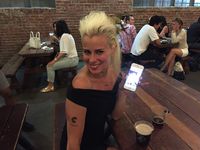 TECHNICAL.LY - Sep 15 - The founder of dating app Cheekd chatted about her experience building her Bluetooth-powered app.

Q: How do you convince people to try your app?
A: I say that Cheekd is not really online dating. It’s to make ice-breaking connections in the real world. After setting up your page and what you're looking for, Cheekd will then send you notifications when a potential match is within 30 feet of you.

Q: You come from 15 years in architecture. Have you taken anything from that experience to the startup life?
A: My background in design has come in handy. I've got an eye for detail which has helped streamlining the UX and design of our app.

Q: Do you see any potential for the tech behind Cheekd for something other than love?
A: Absolutely! Our app is a Bluetooth app so notifies you when someone comes within a 30-foot radius of you. It will be great for conferences and networking events.

Q: What have you learned?
A: Team is everything. The technical aspect of my business has been one of the bigger challenges, and it's the one thing I definitely would have approached differently from day one. I needed a CTO.

Q: How has your experience on ABC's Shark Tank affected your career?
A: After getting shot down by all five Sharks, I looked them in the eye, and said, "Trust that you’ll all see me again."

See all posts on Cheekd 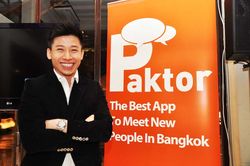 OPW INTERVIEW - Sep 16 - Singapore-based dating app Paktor is like Asian Tinder. The dating app has recently raised $7.4M in series B funding, and is poised to be the biggest social dating brand in Asia. Here is our interview with Paktor's CEO & co-Founder, Joseph Phua.

What is your founding story?
When I was in the US, I became single after a long-term relationship, which lasted ~8 years. I saw a lot of people having success using dating websites so I gave it a shot. It worked for me. When I returned to Singapore, I started Paktor. Going mobile was the most compelling option due to its scalability and the increasing smartphone penetration in Southeast Asia.

How is Paktor different and better than Tinder?
International players have struggled in South East Asia for multiple reasons. Sometimes it is due to the fragmented nature of the region that has multiple languages and cultures that hinders them. At Paktor, we think global and act local. Our approach is tailored to an Asian market, because we know what works for each individual market. Paktor is also the first dating app to offer a premium offline one-on-one matchmaking service and social dating events, called GaiGai (走街).

You raised a $7.4m series B round in July. How are you spending it?
Expansion remains our top priority. The funds will be used to aggressively grow the brand in existing markets that include Singapore, Indonesia, Malaysia, Thailand, Vietnam, and Taiwan. We would like to also expand into new Asian markets. The Paktor team has also grown to 50 team members, up from 15 during its Series-A round 6 months ago. Part of the investment will also be channelled to product development, adding further value for users.

How would you define 'social discovery'?
Social discovery is the serendipitous experience of developing new connections aided by algorithms on social platforms. To me, it means the facilitation of an introduction between two strangers and the ability to meet new people beyond one's existing social circles. Paktor facilitates social discovery in many different ways. For example, we have a wide database of people to meet regardless of whether they are in your immediate vicinity or further away. It also helps you by filtering who you would want to meet by interest, height, distance from you etc. These features increase the likelihood of you meeting someone with whom you may share similar interests and sets the stage for the relationship to grow further and in an organic and genuine way.

What is the future of social discovery?
I see social discovery developing in two ways. Firstly, the increased vastness of the playground to explore and discover. Secondly, the refinement of the discovery process. This means better algorithms and data to help people discover new people.

What is your goal for Paktor for 2016?
Our 2016 goal is focused on rapid growth to become the leading mobile social network beyond the Southeast Asian region.

Andrew Conru: “Fembots Do Not Belong In The Internet Dating Industry”

BUSINESSWIRE - Sep 15 - There has been recent publicity surrounding Ashley Madison, particularly allegations that it used computer-generated female "bots" to lure men to become paying members. "FriendFinder has never created and used computer-generated accounts," commented Dr. Andrew Conru, Chairman and Founder of FriendFinder. “This business practice is repugnant to us; it shows a total lack of respect for the users. Companies like AshleyMadison need to exit this industry,” said Dr. Conru.

WEBWIRE - Sep 15 - Hristo Zlatarski, CEO of elitebook.bg will cover the Bulgarian online dating market in his presentation during the next European iDate, taking place in October 14-16, 2015 at the Strand Palace Hotel in London. Founded in 2012, Elitebook.bg is a Bulgarian dating site for elite singles.

PR NEWSWIRE - Sep 15 - Agile Wings, the Internet investment/incubator firm, has bought DatingFactory, a white label dating provider, for an undisclosed sum. Tanya Fathers, Dating Factory's co-founder & CEO said: "We are really excited to be acquired by Agile Wings, as they can take Dating Factory to the number one position in the industry." Tanya Fathers and Lisa Moskotova (COO) will continue in their current positions.

The full article was originally published at CBS8, but is no longer available.