TECH WORLD - Apr 23 - Sean Rad sat on the stage alongside Farrah Storr, the editor of Cosmopolitan. When asked if it makes him angry when Tinder is referred to as a hook-up app he said: "Not angry, but it's incorrect. It is a platform. What our users decide to do is completely up to them." Tinder's largest demo is the millennial. He adds: "I don't think 18-25 year olds are looking to get married. We survey our users and the majority of them want a meaningful connection." One of the more interesting sections of the conversation was around Rad's short exile. "It was a surprise", he said. "The company was doing incredibly well. I think the board had some fears that at a young age I wouldn't be able to manage that growth. I had fears. I didn't know if I could manage this growth. So we brought in a new CEO." When asked if he is worried about rival dating apps, Rad said: "No, not at all. We're a global brand, with tens of millions actively using Tinder."

WASHINGTON POST - Apr 22 - Almost four weeks after April Fool's day, Burrit-oh! - the dating site that pairs singles based on their taste in portable Mexican - has proven so unexpectedly successful that maker Zoosk is thinking of keeping it. To date, ~2K people have signed up for Burrit-oh!.

NEXT SHARK - Apr 22 - Matthew Nolan is a techie from Detroit who founded several successful startups. His last startup, software-as-a-service company Speek, raised ~$10M in funding before it was acquired in July 2015. In April 2015, he launched Verona, a Tinder-like dating app aimed at bringing Israelis and Palestinians together. Seeing the app's rapid growth, Nolan realized that Verona could go beyond just romantic matchmaking. It is now a friend-making app. Earlier this year in advance of the presidential race he introduced a new feature that connects Democrats and Republicans. "Our goal is world peace", he says.

See full article at Next Shark

See all posts on Verona

NYDAILYNEWS - Apr 21 - The Brickyard in St. Albans placed this sign in the women's restroom. 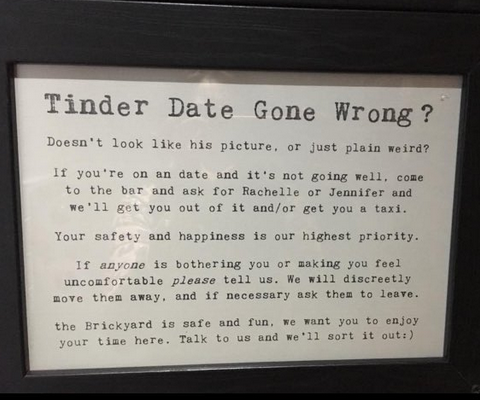 The idea for the sign came to mind after two women asked managers if the men they were with looked like their photos. Most of the feedback about the sign has been positive, but several people suggested having a similar sign in the men's bathroom.

TIMES OF INDIA - Apr 24 - Indian dating app TrulyMadly records an almost equal ratio of registrations from big and small cities. Launched in the second half of 2014, the platform has recorded a massive growth and sees ~55% users from metros such as Delhi and Mumbai and 45% users from smaller cities. While dating apps were launched first in metros, with an intention to tap the large migrant population, those like Woo have, in fact, registered requests from smaller cities to start their operations there. "When we started, registrations were pretty fast and almost 50% were coming from non-metro cities or smaller towns. There were demands and letters from places such as Darjeeling, Ahmedabad and Lucknow to begin operations in their cities," says Sumesh Menon, cofounder and CEO of Woo. The 'matchmaking' app began operations in July, 2014, and has a user base of ~2.5M as of now. Tinder's numbers are also a testimony to the trend. India head Taru Kapoor shares the numbers, saying, "India is Tinder's largest market in Asia and continues to grow rapidly and organically. The app attracts ~14M swipes each day in India an increase from 7.5M in September 2015. We have users across India, in big cities as well as smaller cities and towns."

NYMAG - Apr 20 - Shannon Workman, a junior at the University of Nebraska Omaha and a former member of the Chi Omega sorority, posted a photo of herself wearing a shirt with Chi Omega lettering on her Tinder profile. Administrators accused her of violating a "human dignity" rule, and began to move forward with membership revocation. Tinder CEO and co-founder Sean Rad offered Workman a full year's scholarship and a paid internship at Tinder's offices in California upon learning the news.

The full article was originally published at Vista Voice, but is no longer available.

eHarmony Is Looking For A New Marketing Director For Australia

ADNEWS.COM.AU - Apr 19 - The marketing director will lead all marketing efforts in Australia across offline, online acquisition, brand, creative and CRM. eHarmony's current senior marketing manager, Lynsey Tomkinson, is moving back to the UK.

TECH INSIDER - Apr 18 - TrumpPeopleMeet.com is a URL owned by People Media, a subsidiary of IAC. The Trump supporter-focused dating site has yet to launch. Indeed, IAC says it will never launch. "We absolutely have no intention of launching TrumpPeopleMeet.com," said IAC's representative. Rather, it's an instance of a conglomerate protecting its branding.

See all posts on People Media

Online Fraud Is A Big And Sophisticated Industry

MARIECLAIRE.CO.UK - Apr 18 - UK people lost £60M in relationship scams last year. Scamalytics, the company with a large anti-fraud database, says it now spots 60K 'romance scams' taking place in the UK every week. "The most common fraud is when people are asked to transfer money via Western Union or Moneygram", said Dan Winchester, founder of Scamalytics. Online fraud is a big and sophisticated industry. People might think they are messaging a person, when they're actually messaging a bot.

OPW - Apr 18 - DragonFruit, a new dating app for geeks, has launched this week. It asks users to pick what kind of "nerdy" things they like or are fans of. The options are: Star Wars, Dr. Who, etc.

TELEGRAPH.CO.UK - Apr 16 - Since its launch at the end of 2014, Bumble has attracted 3.5M users - and is currently getting 25K new users a day. "I wanted to start a network that encouraged positive online behaviour versus bullying", says Whitney Wolfe, Bumble founder. On Bumble, a man can only message a woman a finite number of times before the app raises a red flag, asking her whether she's being harassed. The dating app has now introduced a new feature: Bumble BFF (best friends forever). This allows users to pinpoint prospective friends in their local area and meet up.

Match.com Forced To Apologize For Any Offence Its Ad Caused

DAILYMAIL.CO.UK - Apr 13 - For many, freckles are a sign of individual beauty. Match.com has faced a barrage of criticism for an ad that 'profits by bullying' by calling freckles 'imperfections'. Match.com issued a statement apologizing for any offence caused, insisting it felt freckles were 'beautiful'.

PINKNEWS.CO.UK - Apr 13 - Created by Andrew Goyvaerts, POZ launched in March. Goyvaerts said he was inspired to build the app after suffering abuse and rejecting on other apps.