POF To Focus More On Conversation

PR NEWSWIRE - July 19 - As the leader in conversations, with over a billion to-date, POF today launched "Spark", a new in-app feature that enables a user to easily initiate a conversation. By picking up and dragging a new conversation icon over any aspect of a potential date's profile, users can quote and comment on any content – from photos, to anything a user has written about themselves.

FINANCIAL TIMES - July 18 - Older people in England and Wales are getting married and divorced in greater numbers, as greater life expectancy encourages a "more connected" generation of baby boomers to tie and untie the knot. The number of brides and grooms aged 65 and over rose by 46% between 2004 and 2014, according to the ONS, while marriage rates – the number of people getting married as a proportion of the rest of the population – rose by a fifth. The divorce rate among retirees is also on the up. While overall divorce rates have fallen in the last ten years by more than a quarter, the number of men divorcing aged 65+ rose 23%, while among women of the same age, divorces are up 38%. 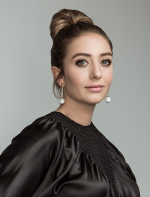 ELLE - July 18 - Whitney Wolfe created Bumble, the 'female first' dating app, in 2014, which requires women to make the first move. There have been 14.5M downloads, 10B swipes per month, and the success of the app landed Wolfe on Forbes' '30 Under 30' list.

Q: Where did your big idea come from?
A: I really wanted to start a female-only social network, where women could only speak to each other in compliments. My business partner said, "That's a great idea, but why don't you do this in dating? I think there's a real need for this in the dating space."

Q: How did you choose the name Bumble?
A: I originally wanted the app to be called Moxie, but unfortunately there was a trademark issue. A woman on the legal team of my business partner suggested Bumble.

Q: What was the first thing you did to get your idea off the ground?
A: Finding a passionate, dedicated and talented team.

Q: What was the second thing?
A: We created the content that told our story, and explained our vision and our mission.

Q: When did your big break happen?
A: I don't think we had one big break. One big moment for us was when I was invited to be a guest on The Daily Show.

Q: If you could go back in time, what is the one thing you would do differently?
A: I wouldn't be so trusting.

Q: How do you think being a woman has helped you starting your own business?
A: There's no better way to start a business than to build a business based off your personal struggles.

Q: What task or area of your business will you never delegate?
A: I don't think I'll ever be able to delegate the future, the roadmap, where we go next.

OPW - July 18 - I'm building a list of buyers of small to medium sized dating properties. Please let me know if you're in the market for a dating app or dating service and have a budget in the range of $500k to $2 million.

Tinder Co-Founder: 3 Things To Keep In Mind When Designing For Millions Of Users

QUORA - July 18 - Here are some tips for designing a product that millions of people use; originally appeared on Quora and answer by Jonathan Badeen, Co-Founder and Chief Strategy Officer at Tinder.

GLOBAL TIMES - July 17 - The Communist Youth League of China (CYLC) has been helping China's young singletons find life partners by holding mass blind date events. Tens of thousands of singletons attend a blind dating event in Hangzhou, Zhejiang Province on June 25. While many welcome the CYLC's new role, some other questions whether it is intervening too much in people's private lives. The attendees mostly come from government organizations, State-owned companies and colleges. These people have guaranteed jobs for life, also known as the "iron rice bowl." In the blind dating market, people with permanent jobs generally have an edge over those working in private companies.

BLOOMBERG - July 17 - For 4 years, China's Momo bumbled along as yet another dating app. Similar to Tinder, Momo let users find people nearby and make a choice whether to pass or play. It wasn't a bad business. But it wasn't a good one. While sales grew at triple-digit %, Momo's 2014 full-year loss tripled to $25.4M. The company managed to hit a profit only in the Q1 2015. Momo net income wasn't too enticing while it bumbled along as a dating-app maker. The turnaround came when chairman, CEO and co-founder Yan Tang discovered video. At first, in Q1 2015, he allowed pre-selected performers to broadcast live concerts. Then in March and April 2016 he launched a broadcast app call Hani and opened up live video to everyone. Momo revenue exploded. From $15.6M in sales for the March quarter last year, live video rocketed to $57.9M three months later - accounting for 58% of total revenue. Last quarter that figure stood at ~$213M, helping the company post ~$81M in net income. Harvard Management Co., which oversees the university's $35.7B endowment, took note and bought 214,350 shares in the Q1 of this year - making it the fund's fifth-largest holding. Based on the stock's quarter-end price of $34, the fund has already netted a 21% return.

Grindr Made A Big Change For UK users

PINK NEWS - July 15 - Previously, only premium users could receive push notifications when another user messaged them. Now all users in the UK will get push notifications automatically, rather than just paid-for Grindr accounts. Users in most of Europe and the US have already been able to access this function regardless of whether they pay for the service. Grindr has been running since 2009, with millions of using the app around the world. The app recorded ~10M downloads in 192 countries last year and 5M monthly active users. 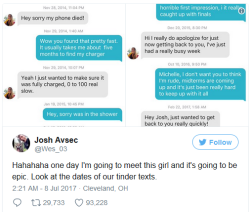 COX MEDIA GROUP - July 13 - Tinder is sending a pair of procrastinating college students who have never before met on a date in Hawaii, three years after they started messaging each other on the app. Josh Avsec and Michelle Arendas started messaging in Sep 2014 and have continued sporadically ever since. Avsec thought Arendas seemed "different" from other girls he had been matched. He sent her a message that simply said, "Hey Michelle," in Sep 2014. "Hey sorry my phone died!" Arendas replied two months later, kicking off a running gag that has continued for three years. Back and forth the pair messaged, each time with excuses to explain why it had taken so long to write. Avsec posted a screenshot of their running conversation on Twitter last week. Tinder took notice. "We're sending you to Maui, but you can't take two years to pack your bags!" Tinder wrote in a tweet.

FINANCE MAGNATES - July 13 - Matchpool raised $5.73M in just over a day to fund its blockchain-based 'Slack Meets Tinder' matchmaking platform. The Matchpool platform allows anyone to create shared interest groups called 'pools', similar to Slack Channels, and be rewarded for making connections among friends or users of similar interests. While dating is the initial use case presented by Matchpool, the developers say that the platform can be used for anything from business to health to education networking.

by Avi Mizrahi
See all posts on Finance Magnates

See all posts on Matchpool

TECH CRUNCH - July 13 - Bumble's new SuperSwipe feature is similar to Tinder's Super Like button, which launched in late 2015. At the time Tinder said that conversations initiated with a Super Like lasted an average of 70% longer than other conversations. To let users pay for this new feature, Bumble is launching Bumble Coins. Priced at $0.99 each with a discount for buying in bulk, these coins will become the official in-app currency to pay for SuperSwipes, as well as additional paid features that the dating app will be launching before the end of the year.

OKCUPID BLOG - July 12 - Photo commenting is now available to everyone on OKCupid. It is easy to use. When users are on someone's profile and they see a photo they like they can say something about  it which creates a new opportunity to connect with someone.

See all posts on OKCupid

In Britain, New Dating Apps Let Brexit Opponents 'Remain' With Each Other

NPR.ORG - July 11 - Since the EU referendum a year ago, people have started posting how they voted (Leave or Remain) on their dating profiles on Tinder, OKCupid and Match.com. M14 Industries, an app development company based in Manchester, spotted a market. Better Together Dating, or BTD, is a dating app that bills itself as "Tinder for the 48%." That's the proportion of British voters who chose Remain in last year's EU referendum. The app was online within days of last year's referendum. Along the same lines, another team is crowdfunding to create a dating app called Remainder. "We're trying to provide a little comfort for these heartbroken voters," its website says. But so far there's no app.