GRATIS DATING TIPS - Nov 22 - Happn users can now use an interactive map to see their matches. The Happn Map is similar to the Tinder Places feature. Users can see on the map who else has been at certain places lately.

EliteSingles and ChristianCafe Have the Best Customer Service

NEWSWEEK - Nov 22 - EliteSingles, ChristianCafe and Tinder have recently received the "America's Best Customer Service" award in the online dating category. The Best Customer Service 2019 ranking has been identified in an independent survey from a vast sample of ~20K U.S. customers who have either made a purchase, used a service or gathered information about a product or service in the last three years. Newsweek worked with Statista, the respected global research firm, to collect and analyze data across 141 retail categories. 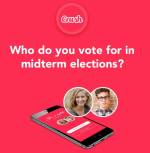 PR NEWSWIRE - Nov 20 - The online dating app, Crush, where female users make first contact with matches by asking male users questions that narrow down the field of potential dates, is now allowing users to get to know each other's political views before going out. The app utilizes new questions such as "Who are you voting for in the midterm elections?" to help women determine which men they find most compatible.

See all posts on Crush

Reasons Momo's Stock Is Down

CHINA KNOWLEDGE - Nov 21 - Momo is known for its live-streaming platform and dating app Tantan, dubbed as the "Tinders of China". Momo's revenue grew 50% YOY in the past three quarters. But the company has seen its share price fall by ~40%. The company faces some domestic headwinds in the near future. Firstly, China is imposing stricter regulations on its social media and video streaming market. Live-stream services have to fill up the Internet Content Provider (ICP) form and gain certificates for their services. The new measures also require real name registration. The new measure may put a dent on Momo earnings and future growth as the company may need to hire more people to enforce standards on its platform to prevent it from being shut-down. Next, the company also faces increasing competition such as Huya. Huya currently claims ~91.5M MAU which isn't far from Momo.

The full article was originally published at China Knowledge, but is no longer available.

THEWEEK.CO.UK - Nov 21 - How and why people fall in love is still not entirely clear. Scientists are aligned in saying that opposites don't generally attract. Rather, we tend to love people who share our values and outlook on life and who are of similar age and attractiveness. Falling in love is a slow process that can take months, but recognising the potential for love can happen quickly. It takes seven seconds or less to form a first impression of somebody and know whether there is a spark. Humans make unconscious judgements using visual cues. With dating apps however, we have to rely on static photographs and written conversations. Badoo users tend to match with similarly aged people and with those of similar popularity. The attraction happens after the swiping process. But Badoo users tend to message just 50% of their matches so swiping "yes" is therefore not necessarily an indicator of attraction. When the messaging starts, it takes users around two days and 20 messages to decide whether to date someone. This is slower than in person, which is why Badoo encourages its users to go on dates early.

Tinder Has a Secret 'Desirability Ranking'

THETAB.COM - Nov 20 - Tinder's algorithm uses its very own "desirability" ranking, called an "Elo ranking" which pairs people. Every user has a rating on Tinder, and they can only swipe through people of a similar rating. If users have low ranking, they'll see people with low rankings too. The rating is technically not a measure of attractiveness, but a measure of "desirability," according to Sean Rad, founder and former CEO of Tinder. "It's not just how many people swipe right on you," he said. "It's very complicated. It took us two and a half months just to build the algorithm because a lot of factors go into it."

VOGUE - Nov 20 - On a recent trip to China, Whitney Wolfe Herd found herself inadvertently off social media. "I had a full panic for the first 48 hours and I was almost going through a withdrawal, which is terrifying in itself," she says, appalled, but laughing. "But after 48 hours, I didn't want it anymore. I was so present, it was like my senses were re-activated." Months later, Wolfe Herd launched a new feature on Bumble: Snooze. Snooze allows users to go offline very politely. "A lot of big companies have stayed away from this, because they don't want to cannibalize their business. It's a very courageous move as a company, but we truly believe that it's needed and necessary," she says firmly.

Lumen, the Dating App for 50+ to Launch in Ireland

MARKETING.IE - Nov 20 - Lumen founder and dating expert Charly Lester will be in Dublin this week for the launch. Lumen raised £3.5M from Andrey Andreev, the Founder of Badoo.

See all posts on Lumen

In the Elevator With Bumble CEO Whitney Wolfe Herd

WSJ - Nov 16 - WSJ's Joanna Stern "bumps into" Bumble's CEO in the elevator and finds out what profile images work best, when to swipe right and how be a successful woman in tech.

CHANNEL4 - Nov 19 - According to a study, 80% of online daters misrepresent themselves on dating sites/apps. Lying about age, weight, or using a more flattering photo is a normal practice on dating sites. Well, maybe not, especially if it's treated as sexual fraud. Lawyers are calling for tougher rules governing online dating to make catfishing for sex a crime. Anna Rowe, a victim of such a fraud, started a petition to make catfishing a crime. Anna fell in love with a man she met online. After 14 months of dating, she discovered that he was using fake identity, was married and actively having relationships with multiple women simultaneously. 44K people have already signed the petition. Prof. Irina Manta specializes in intellectual property law in the state of New York. She wrote a paper - Tinder Lies and an article in Washington Post calling for change in the law in the USA.

Match CEO Mandy Ginsberg to Speak at Ignition 2018 Next Month

BUSINESS INSIDER - Nov 19 - Match Group has been tangled up in a lawsuit – and countersuit – with Bumble since March. In May, Facebook announced plans to launch Facebook dating. Match Group is faced with the challenge of defending their market share. Match CEO Mandy Ginsberg will be discussing that at IGNITION 2018, Business Insider's flagship conference, in December 3-4, 2018 in New York.

Law Professor Wants to Make Catfishing for Sex a Crime

WASHINGTON POST - Nov 19 - Anyone who uses an online dating site or an app knows that people don't always look like their photos. One study found that 80% of people lie in their profiles. Lies such as age or weight are harmless and easy to detect when meeting in person. But other lies are more dangerous. Some people lie to get sex and dating apps make it very easy. In a forthcoming law review, Prof Irina Manta will propose that state lawmakers confront this issue and make catfishing for sex punishable. Fines would be capped at $10K.

GAY STAR BUSINESS - Nov 18 - Back in September, gay dating app Chappy relaunched. The sibling app of Bumble, where women must make the first move, Chappy hopes to empower gay men in a similar way. With the relaunch, users can specify the type of relationship they're looking for. Adam Cohen-Aslatei recently became Chappy's new Managing Director. "Our industry tends to have few gay leaders in top positions, and that's one reason I am so honored to be in this role," he said. 'We believe everyone in our community deserves a better way to meet new people and build relationships,' Cohen-Aslatei states of Chappy's goals. 'We also solve some of the most frustrating gay dating pain point. Endless torso scrolling is dead. All of our profile pictures feature a face and a name. Our bios are descriptive and we have a zero tolerance for hate and discrimination. All Chappy members sign a pledge to treat people with kindness and respect. Also, all profiles are verified.'

See all posts on Chappy