THE VERGE - Mar 15 - RIP to the mysterious Elo score. Tinder published a blog post on the subject. The Elo score ranked people by attractiveness. The more people that swiped right the higher their score. The most desirable people interacted with one another. "Today, we don't rely on Elo, though it is still important to consider both parties who Like profiles to form a match." Tinder adjusts potential matches a user sees every time someone acts on his or her profile, it says. It sounds like Tinder uses something similar to the Gale-Shapley algorithm, or the algorithm Hinge has said it uses, which identifies patterns around likes. If I like one guy, and so does another woman on the platform, she and I might have the same matching taste. If she's liked someone on the platform that I haven't seen yet, Tinder could show me that profile in the hopes that I might like it, too.

ABC6 - Mar 15 - With Unveil, users record a short audio clip detailing who they are and what they're looking for, instead of a profile picture. The catch? The user's face is blurred. Potential matches unlock the face on the other side of the obscured image by actually talking on the phone. More of the photo is "unveiled" with each conversation.

See all posts on Unveil

Learn How to Set Up Your Database Like a Pro

OPW - Mar 17 - The Chief Scientist at Tinder Xue (Steve) Liu just co-authored this book on cutting edge techniques for setting up searchable storage in the cloud.

SEEKING ALPHA - Mar 15 - Momo is a mobile platform in China. It consists of the main Momo app, which combines live video streaming, chatting, gaming and TanTan, the Tinder of China. On Tuesday, March 12, Momo jumped 12% after it had released its Q4 and FY 2018 earnings before the market opened. Momo has beaten expectations every single time since its IPO in 2015. Momo is hugely profitable. And without Tantan's financial impact, the profitability would even have been higher. Momo invested heavily in 2018. With an extra 57% spending, a lot of companies would see their bottom line wither. But not Momo. Tang Yan, Momo's founder-CEO, was righteously very proud of the bottom line margins, which grew despite the very heavy investments. Because of that huge profitability, Momo is able to give a present to its shareholders: a special dividend. The special cash dividend is $0.62 per ADS, a 1.64% one-time yield at the current price ($37.76 at the moment of writing). The total amount of cash dividends the company will have to pay will be ~$128M. Tantan has still less users than Tinder. The dating app started the monetization only in Q1 2018: in January it started its VIP service. Then later, in July, it added two extra paying services: A See Who Likes Me stream and Super Exposure. With these three services, TanTan already has 3.9M paying subscribers which is already 90% of Tinder's number of subscribers. In Q4, TanTan's total revenue was $33M up 36% QoQ. While this is only a small number, I think the Chinese dating market could still be in its infancy and I expect it to grow for at least a decade.

DAILYMAIL.CO.UK - Mar 15 - Growlr, Smell Dating and Unveil are generating successful matches in unique ways - including asking users to talk to each other before seeing their photos and matching people based on celebrities they like.

Time Out Singapore and Paktor Group Partner for a Dating Event

MARKETING MAGAZINE - Mar 13 - Time Out Singapore has collaborated with dating agency Paktor Group's GaiGai to increase brand awareness of its product offering by hosting a dating event called "Find Me a Blind Date". Both Time Out Singapore and Paktor Group will also be presenting this event, while Winestone at Novotel Singapore is the exclusive venue and F&B partner.

See all posts on GaiGai

Tinder Offers Up to $1M in Free Ads to Nonprofits

SWIPE LIFE - Mar 13 - Tinder we'll be offering up to $1M in in-app advertising to worthy nonprofits. These ads will appear in front of millions of Tinder users and provide companies with the opportunity to donate and volunteer. In honor of International Women's Day, Tinder launched ads from its first partner, She's the First, an organization dedicated to fighting gender inequality through education. Previously, Tinder donated ~$20K to She's The First as part of #FundHerCause campaign.

BharatMatrimony Rolls Out a New Safety Feature for Women

OPW - Mar 13 - On Women's Day, BharatMatrimony launched 'SecureConnect', a new calling feature that enables women to receive calls from male members, who have a premium membership, without revealing their contact number.

See all posts on BharatMatrimony

KR ASIA - Mar 14 - The founder and CEO of Chinese location-based social app Momo, Tang Yan, said the company will pursue opportunities in overseas markets for its dating app Tantan. Momo acquired Tantan last May in a $735M cash and stock swap deal. Tantan is one of the top ten social apps on Android in Nepal, Singapore, Indonesia, and the Philippines, with ~10M installs. Tantan had 3.9M paying users in the Q4 2018.

Bumble Is Launching a Podcast to Help People Unsubscribe From Negativity

STANDARD.CO.UK - Mar 14 - Bumble's new show Unsubscribe is about empowering its listeners to remove the negative things in their lives. It is hosted by the app's international VP of marketing and communications, Louise Troen, and mental health and body activist Jada Sezer. Produced by Sony 4th Floor Creative Group, each episode will feature conversations with different guests about being mindful of the effects of our emotions and practices.

A Brief History of Online Dating

BLOOMBERG - Mar 13 - In 1959 computer scientists used a five ton computer and it took three weeks for couples to be matched. Now it' just a momentary swipe of a finger. And did you know that YouTube started as a dating site? This is the brief history of online dating. (Video by Abigail Morgan, Leila Hussain. Graphics by Christian Capestany)

THE VERGE - Mar 13 - Scruff, a gay dating app, is launching a new live quiz show, called Hosting, that'll live inside the app. There will be a $500 prize for each game, and participants can browse who else is playing and either "woof" at them, which is like a Facebook Poke, or "favorite" them, which adds them to a list of people they might want to revisit. Every show takes place at 9PM ET, and is available in North America. There are three rounds with 10 questions each. Players have 10 seconds to answer each question. Scruff has committed to being an ad-free platform, so it says there won't be ads during the quiz show.

See all posts on Scruff

ASKMEN - Mar 13 - 28% of the 1,045 surveyed in AskMen survey chose statistics on how their profile is performing as their most wanted feature. 20% would like to see automatic suggestions for first dates, followed by to see who else your match is chatting with (14%) and how to tell who has blocked you (14%). 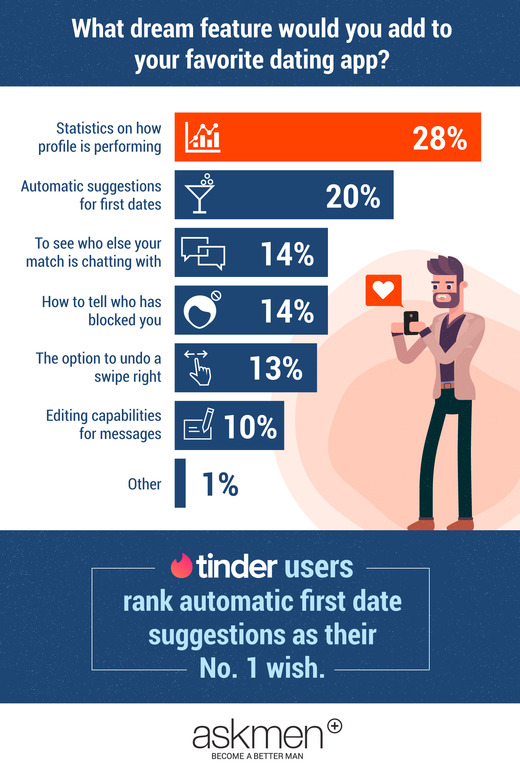 OPW - Mar 13 - We protect sources. We're looking for insider news and tips. Got something interesting? We will not share your contact information with anyone. We respect embargoes, and we absolutely will honor your privacy. Send your news directly at tips@onlinepersonalswatch.com.