FORBES INDIA - Nov 18 - Barry Diller, the former Hollywood mogul has ground his way to a $4.2B technology fortune. At IAC he has built and spun off ten publicly traded companies, including Ticketmaster, travel giant Expedia and Match Group, Tinder's parent company, worth a combined $70B. "Spinning off Match is a process of renewal in that IAC gets to start inventing again. We are shrinking in order to grow again… shrinking with $5B of cash," he says. Former Diller lieutenant Dara Khosrowshahi, now the CEO of Uber Technologies, says, "Barry's like a shark. If he stops swimming, he dies. So he just keeps going." Diller's current hand looks challenging. Match shares were falling after Facebook said it would redouble its online dating efforts. There are also lawsuits. The co-founders of Tinder, Sean Rad and Justin Mateen, claim they were deprived of billions when the app was consolidated by Match. Diller responds sharply: "Sean Rad is a blowhard and a bad actor." Facebook, Diller adds, has yet to register as a threat to Match. "I'm not overly worried," he quips, then brings up the possibility of regulation. "I think that there are real issues," he says, turning his attention to Google. "It's okay to take our money as advertisers. It's not fine, in my opinion, to then try and get our customers."

THE VERGE - Nov 19 - The League, a dating app that requires LinkedIn verification to join, is launching its version of speed dating next month: two-minute video dates that take place within the app. It's called League Live, and the company will allow people to opt in to the video dates, which take place at 9PM local time on Sundays starting on December 1st. CEO Amanda Bradford says that, in initial beta testing, users between the ages of 35 and 40 liked the feature most, likely because their time is at more of a premium. Although the feature is available to both paying and free users, Bradford says only users who have a high "League Score" will have access. The League Score is measured by factors like how often they log on, whether they’ve been reported by other users, and how complete their profile is.

Tinder Introduces New Feature for Dating at Events in India

INC42 - Nov 18 - Tinder is launching a new in-app feature, Festival Mode, in India. Users can now add a badge to their profile highlighting their planned festival destination so they can match and chat with other users attending the same event before they arrive. Tinder had first introduced Festival Mode in May 2019. Since then it has enabled such dates across events such as EDC Las Vegas, Bonnaroo, British Summer Time and EDC, Orlando.

ESSENCE - Nov 18 - Comedic actress and TV host Tiffany Haddish has teamed up with the Bumble to give singles tips to beef up their dating success. Bumble users in "date" mode can match with Tiffany's in-app card to see her top dating tips and advice. Additionally, users who connect with Haddish's card will get the chance to have a one-on-one profile makeover from the Girl's Trip star via Bumble's video chat feature.

VALLIANT NEWS - Nov 18 - After a Vice documentary about last weekend's Unite the Right rally in Charlottesville, Virginia, featured white supremacist Chris Cantwell, he was banned from Facebook. And on Thursday, he was kicked off OkCupid as well. OkCupid followed up by tweeting that "there is no room for hate in a place where you're looking for love." The site also asked users to report anyone who appears to be involved in a hate group. In the Vice documentary, Cantwell advocates for the alt-right's use to violence – during Saturday's protest and beyond – in order to create a white "ethno-state." And he describes how his views on race affect his beliefs on whom should date or marry.

PRESS RELEASE - Nov 18 - Spark Networks has appointed Eric Eichmann as CEO. Eric will replace Jeronimo Folgueira who is stepping down from the role as CEO. To ensure a smooth transition, Jeronimo will remain with Spark Networks through the end of 2019 and will continue to serve on Spark's board of directors. Previously, Eric was CEO at Criteo. Under his leadership, Criteo grew revenues from $320M to $2.3B, beat market expectations 19 quarters in a row, and became a recognized global leader in commerce marketing. Prior to this role, Eric was COO at Living Social and at Rosetta Stone.

SEEKING ALPHA - Nov 18 - Momo recently introduced Qianshou Love, a new app designed for lower tier cities. Qianshou Love is available only via app stores owned by Xiaomi, Vivo and Oppo smartphones. This makes sense as these smartphone brands are favorite amongst lower-tier city users due to competitive specs and low price point. Qianshou is more suitable for the latter stage where marriage is the objective. In terms of monetization, Qianshou Love has multiple levers to encourage in-app spending. Every day, 15 free recommendations are sent to the user, after which the user will have to pay for additional matches. VIP service is also available where the user can receive 20 matches per day with 3x more likelihood to connect with a potential match.

Q&A With Priti Joshi, VP of Strategy at Bumble

YOURSTORY - Nov 18 - Bumble's VP of Strategy, Priti Joshi, talks about her journey with the company, and how it is trying to put women first when it comes to making important moves in life. Priti is a second-generation Indian American based in Austin, Texas. Born in Mesquite, Texas, she grew up in Dallas, and as a child participated in Indian dance competitions, completed her undergraduate degree in Business Honors and Finance from the University of Texas in 2009, and a Master's in Business Administration from The Wharton School at the University of Pennsylvania in 2014. She worked for over seven years at McKinsey. At Bumble Priti looks after strategy and expanding Bumble's presence in international markets.

Q: What does your role at Bumble entail? How big is the India team?
A: I focus heavily on expanding Bumble's presence internationally. Our team on the ground in India is small but mighty, and our global teams - specifically at our HQ - also dedicate a lot of time and resources to supporting our efforts in India.

Q: What does Bumble offer the modern Indian woman that is different from other networking and dating apps?
A: We developed a feature specific to India where only the first initial of a woman's name would show on her Bumble Date profile. We make it easy to 'Block and Report' anyone you don't want to see on the app and we have 'Photo Verification' and 'Request Photo Verification' to help ensure that the person you're connecting with is who they say they are.

Q: How has Bumble been received in India?
A: Women in India have made the first move over three million times, and are sending 2x as many messages as women in the rest of the world. Furthermore, 60% of women in India use two or more modes within Bumble.

Q: What kind of market does India present in terms of size, geography, and culture?
A: In urban India, the percentage of women mobile Internet users stands at 40% and men stands at 60%. We've also seen that from a user behaviour perspective, these smartphone savvy women above the age of 19 have the highest propensity for social networking, browsing and text chatting.

MEDICAL LIFE SCIENCES NEWS - Nov 17 - A new study (with 634 participants in their 20s) in the journal of Experimental Social Psychology concludes that when people are especially attracted to someone, they'll be more likely to misrepresent and fib.

OPW - Nov 17 - Subscribe here. We promise to be interesting, save you time and keep you informed.

CruiSea Is a Dating App Used on Cruises

CRUISE INDUSTRY NEWS - Nov 15 - CruiSea, a new dating app allows singles to make love connections while at sea. CruiSea users create a profile, mark their gender, interest and intentions, upload a photo, and browse potential partners. The app is searchable by cruise line, ship, port and date ranges. Users can also search for matches as a cruise guest or crew member. As of early November, CruiSea had 1,200 active users.

S'More Launches in Beta, Backed by a $1M Seed Round

MOBILEMARKETING MAGAZINE - Nov 14 - Dating app S'More (a.k.a. Something More), has launched its private beta this week in the Boston area, with a waitlist of ~8K singles and a $1M seed round, led by Benson Oak Ventures, and also including a number of private investors. S'More wants user to get to know each other without seeing them first. The more a user engages and chats with a person, the more their profile photos unblur and the more their private content unlocks. S'More founder, Adam Cohen Aslatei, worked at various dating apps and ad tech firms, including gay dating app Chappy, The Meet Group and Spark Networks.

See all posts on S'More

SEATTLE TIMES - Nov 13 - At the events hosted by YouShouldDate.ppt, presenters are pitching their friends, Shark Tank-style, to hundreds of potential romantic partners. Following each PowerPoint presentation, the audience has two minutes to ask the eligible friend questions - or, in some cases, to ask them on a date on the spot. YouShouldDate.ppt is part of a wave of dating events that have sprung up around Seattle. 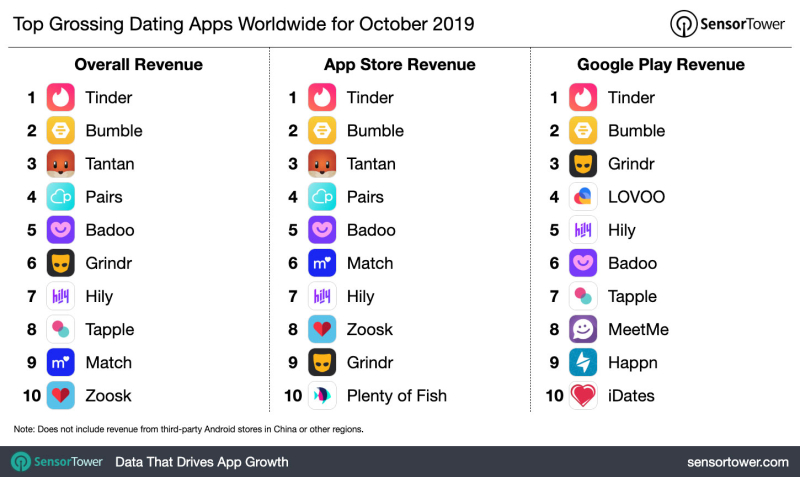 There Are No Private Messages on Dating App "SEEN"

GRAZIA DAILY - Nov 13 - SEEN Dating is the brainchild of Mike Montgomery, who set out to create a dating app with increased transparency. The aim? To reduce catfishing, ghosting and trolling within dating apps. Each time a user interact with other users on SEEN all the text messages and the video chat, enabled through the app, are recorded and posted under her/his profile in real-time. People can follow the interactions of daters on the app without even setting up a profile. 'We know that transparency in dating might seem terrifying at first,' said Montgomery. 'But we believe it represents a more positive and effective future of online dating. Online daters are fed up with fake profiles and time wasters, and transparency puts an end to that.'