THE STAR - Nov 19 - Before President-elect Joe Biden was declared the winner, uncertainty was in the air for several days. Searches pertaining to moving to Canada spiked in the U.S. Dating site Maple Match has returned for the 2020 election season. The site is now inviting users to join the waitlist for its 2.0 launch. The previous iteration, which was launched in 2016, was a Tinder-style app matching Americans wishing to escape political turmoil with compassionate Canadians. The current site does not provide details on how it is supposed to work.

by Mansoor Tanweer
See full article at The Star

CZECH CRUNCH - Nov 19 - Lide.cz, the legendary dating site based in Czech Republic, is shutting down after 23 years of operation due to several reasons. One of the reasons is the strong competition from the likes of Facebook, Instagram, TikTok and Tinder. Seznam.cz, the parent company, also states that the online dating platform has not met financial expectations for some time. In addition, it was becoming more and more difficult for the team to keep sex offenders off the site. Lide.cz was featured in "Caught in the Net" documentary which follows three actresses pretending to be 12 years old girls on social media. Almost as soon as their fake profiles were set up, hundreds of men from around the world began contacting the actresses. Lidé.cz will officially end its operation on December 14.

OPW - Nov 18 - Dating Pro, a dating software provider, is looking for people with expertise in running a dating business for new research. They're researching why people decide to go into the dating business, what goals they're planning to achieve, and what they actually achieved. With the data, they are considering and trying to revolutionize the approach of launching and scaling successful dating-related projects. By analyzing insights from entrepreneurs' success stories, new entrepreneurs should be able to avoid the most common roadblocks and challenges.

TECH CRUNCH - Nov 18 - French startup Yubo, which focuses on young people under 25, has managed to attract 40M users. A fraction of them hang out every day in live-streaming rooms, meet new people and spend money for more features. Yubo expects to double its revenue this year to $20M. The app has recently closed a Series C funding round of $47.5M (previously raised $19.5M) With this funding round, Yubo will expand its team. There are currently 30 employees in Paris, London and Jacksonville. Yubo will open an office in New York.

See the top news on Yubo

PR NEWSWIRE - Nov 17 - The three new ads (which belong to a series of seven) feature everyday moments of meaningful connection. The ads will launch internationally on key broadcast outlets across the UK, US and Australia. In the UK, they will air on Channel 4, ITV and Sky. View the ads here.

See the top news on eHarmony

See all posts on Selective Search

Hinge Breaks out of Tinder's Shadow

COVERING COMPANIES - Nov 16 - In Q3, Match Group posted 88% revenue growth for its non-Tinder dating apps, including Hinge, Pairs, BLK, Chispa, and Hawaya. Hinge also reported an 82% YOY surge in app downloads. Launched in 2012, the same year as Tinder, Hinge branded itself as the anti-Tinder app. Match acquired the startup in 2019. "Match's acquisition was driven by the need to retain users who were looking to move past Tinder's hookup culture, said Mark Brooks, a marketing consultant to online dating companies through his marketing agency Courtland Brooks. "Tinder is a game. What they intend to do with Tinder is soak up as many people as possible," said Brooks. "And then what they intend to do with Hinge is graduate people from Tinder to Hinge." In Q3, Hinge launched paid features: virtual roses, akin to Tinder's Super Like, and writing prompts called Standout to spur conversations between daters. Lauren Cassel, Morgan Stanley's analyst, estimated that Hinge would have 8M subscribers in 2030, contributing $2.8B in revenue compared to the current $60M.

How the U.S. Military Buys Location Data From Ordinary Apps

VICE - Nov 18 - Muslim Pro, a Muslim prayer app with ~98M downloads, is one of the apps connected to a supply chain that sends people's personal data to brokers, contractors, and the military. Another app in that chain is Muslim Mingle, a dating app that has been downloaded ~100K times. Many of the users of apps involved in the data supply chain are Muslim. Muslim Mingle is sending precise geolocation coordinates of the phone's current location and wifi network name. The developer behind the app as well as other dating apps such as Black Mingle which is marketed specifically towards Black people, did not respond to multiple requests for comment.

LTR - Nov 17 - The first LTR conference happened in September and sold out within 72 hours. (See speakers and attendees list).

The latest by-invitation-only LTR conference happens this Thursday also filled up within 72 hours of invites going out. You can see the speaker line up here. Presenters will present on ideas worth sharing.

This conference is all online, and includes peer networking. LTR is for leaders of Internet dating companies and online social communities. Members of the very established Internet Dating Excellence Association, and very fledgling Online Social Community Association were invited.

Please email me at mark@courtlandbrooks.com if you work in the dating or online social community industries and would like to join IDEA or OSCA for invites to future LTR conferences.

Chipotle Teams up With Hinge 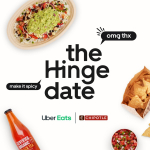 CNN BUSINESS - Nov 16 - Chipotle, Uber Eats and Hinge are teaming up to create a new menu that encourages dining during distant dates. Hinge users will get $20 off their next three orders of Chipotle delivered with Uber Eats. 10 Uber Eats customers who order from the new menu will have the chance to win dating advice from actress Rebel Wilson.

FORBES - Nov 16 - Researchers at San Diego-based Independent Security Evaluators discovered that even if they'd been banned from Bumble, they could acquire a wealth of information on its daters. The flaws were fixed earlier this month. For ~6 months since the researchers alerted Bumble they could acquire the identities of every Bumble user. If an account was connected to Facebook, it was possible to retrieve all of their "interests" or pages they liked and pictures and rough location. Bumble's API didn't do the necessary checks or have limits so it was possible to repeatedly probe the server for information on other users. It took six months for Bumble to fix the problems. Bumble rival Hinge had vulnerabilities and the problems were addressed in under a month.

OPW - Nov 15 - We'd like to keep you informed daily. Just subscribe here, and we'll keep you up to speed.

Bumble Taps Goldman and Citigroup for IPO Next Year

BLOOMBERG - Nov 13 - Bumble is working with Goldman Sachs Group and Citigroup on its planned IPO. Bumble can list as early as the Q1 of 2021. Morgan Stanley is also advising on the listing. Bumble could seek a valuation of $6B to $8B in an IPO.

NBCDFW - Nov 13 - "Dallas is S'More's sixth active city in the U.S.," said Adam Cohen Aslatei, CEO of S'More. S'More is a new relationships app that's about getting to know a person before seeing a profile picture.

Where Will Match Group Be in 5 Years?

THE MOTLEY FOOL - Nov 13 - Match Group went public at $12 per share five years ago after being spun out from IAC. The stock has risen more than eleven-fold since then, and the annual revenue rose from $888M in 2014 to $2.1B in 2019, representing a compound annual growth rate of 18.8%. Match's average revenue per user (ARPU) could eventually peak as it saturates Tinder's subscriber base with Gold upgrades. That's why Match recently started testing Tinder Platinum, which includes all the Plus and Gold perks and adds two new features: "Priority Likes", which take precedence over Likes and Super Likes from lower tiers; and "Message Before Match", which lets users attach short messages to their Super Likes. Match will continue to expand Hinge and its other stronger apps, and possibly acquire additional dating apps.

by Leo Sun
See full article at The Motley Fool