THE STAR - Feb 15 - Andrea Lo is the founder of Toronto Dating Hub. "It's like being at a virtual pub or house party," she explains. "You can talk as a larger group but also in smaller groups and individually." Lo moderates the conversations with icebreaker questions. Toronto Dating Hub is just one of many online dating operations that are hosting virtual events for singles. While Matt Paoli first started Flare Events as an in-person speed dating company in February 2020, he quickly pivoted to virtual during the pandemic. Since then, he's been organizing three to four online speed-dating events per month. Flare hosts its speed-dating events through Zoom. They typically have 10 to 14 participants and begin with a half-hour icebreaker conversation. Then the host puts participants into breakout rooms for eight-minute, one-on-one chats to get to know each other. Celebrity matchmaker and online dating expert Carmelia Ray is a fan of online dating events. "I don't have to leave my house," she says.

CitySwoon on How They Reinvented Speed Dating During COVID

CANBERRA TIMES - Feb 13 - CitySwoon was already reinventing speed dating long before COVID came and upended everything. It was evident the dating world was going digital, long before COVID. This is why CitySwoon decided to look into taking its speed dating service online even before the pandemic and the company was well on its way to launching a custom platform when COVID hit. Unlike a Zoom, the platform allows for both group chat - so that the speed dating hosts can chat to everyone at once - and private calls so participants can still have that one-on-one experience. After each date, participants rate their date out of five.

See the top news on CitySwoon

How a Breakup Spurred a New Venture - Birdy

ENTREPRENEURSHIP - Feb 13 - Laid up in bed, Juliette Swann had a lot of time to think. She recently had broken up with her boyfriend of five years. Then she fell off a horse and landed badly, breaking a vertebrae. Two surgeries, and two months in bed, followed the accident. Swann is the founder and CEO of Birdy, a dating app that emphasizes personality and compatibility rather than the more superficial, picture-heavy approach of other dating sites. Birdy users first take a personality test, inspired by the Myers-Briggs Type Indicator. Test results are used to match users with people they are compatible with. Before users see pictures of their matches, however, they first view each other's "storybooks," which essentially are profiles in which people talk about their passions and values, share memes, and upload pictures (but not of themselves). Only after both parties agree to move forward are their selfies revealed. Swann says that 60% of Birdy users are women.

See the top news on Birdy

CHICAGO TRIBUNE - Feb 13 - Struck, a dating app that matches users based on their birth charts (the placements of the sun, moon and planets at the time of a person's birth), launched this past summer, initially in LA, San Francisco and New York. The new app recently became available to Chicago residents. To get started on Struck, users create their profiles, and must enter their birth information, so Struck can generate a birth chart to help find suitable matches. While signing up, users choose a list of personality traits, uniquely populated off their birth chart, and life priorities, such as family, arts and culture, socializing and partying.

See the top news on Struck

BUSTLE - Feb 13 - Lolly is a new, short-form video dating app. "Short video content gives users so much valuable information to make more meaningful connections. You can see someone's dog, how they interact with their family, their personality, and quirks," says Angela Huang, Lolly's press associate. Like TikTok, Lolly is about showing, not telling. There's no room for bios or mandatory questions to answer, just space to create content.

See the top news on Lolly

Slide With Intention: a Dating Site for Black Folks

MADAME NOIR - Feb 13 - Slide With Intention is a new dating site for Black people designed to match people beyond just a profile picture. It connects users via Instagram based on their "lifestyle choices and their physical preferences for romantic interactions". It's free to join but if members want to play, they have to pay. So far, the site has ~3K users and every day more people are joining.

LTR - Feb 15 - In our modern technological society, important life transactions are taking place online. Jeff Tinsley, CEO of RealMe, discusses the value of building trust and increasing user safety in online dating. He believes that anonymity in online dating contributes to the prevalence of romance scams and fraud. 2020 saw a 20% increase in romance scams attributed to the Covid-19 pandemic. Recent surveys have shown that up to 50% of profiles on dating sites are fake or contain falsified information. 27% of the U.S. adult population has been a victim of fraud or crimes originating from online interactions with financial losses approaching $20B annually. There is a strong demand for reputation and background information, with 98% online daters desiring this information. Jeff Tinsley details the benefits of enhancing safety and trust in the latest video in the LTR Conference series.

LTR stands for Love, Technology, Relationships and the online conference covers the Internet dating and Online Social Communities space. It is for members of IDEA and OSCA.

The November LTR was kindly sponsored by RealMe, vPaaS by The Meet Group & Utopia Analytics.

CEO of The Meet Group, Geoff Cook to Speak at LTR Edition 5

OPW - Feb 15 - TOPIC: Inside the vPaaS Video Platform as a Service

Geoff Cook heads one of the most unique social dating community companies worldwide. The Meet Group is focused on providing one-to-many video, and comprises industry leading brands Meetme, Lovoo, Tagged, Skout and Growlr. Geoff joined the dating industry in 2005 and pioneered one to many video. This platform (vPaaS) is now available to other dating apps, like POF. What does vPaaS do? Who can get vPaaS? What's in store for the future? Geoff will answer these questions and enlighten you on one-to-many video.

LTR Edition 5 is on Thursday 18th Feb starting 11:30am EST (New York). If you hold a full time leadership role at an Internet dating company then you are welcome to join IDEA for free, and welcome to join LTR events for free. See the LTR Edition 5 overview and invite page here. Email mark@courtlandbrooks.com to RSVP for LTR. There are 80 places only.

FAST COMPANY - Feb 12 - Bumble went public on Thursday, and investors were very much interested in swiping right. The dating app, which soared in its first day of trading, is well-known for letting women make the first move. And in fact much of its success is due to this fundamental design decision. "The app is celebrating that women make the first move and men take a passenger seat. That sets us apart. And that's a design decision", said head of product design Lara Mendonça who joined the company in September 2019. The app's bright yellow color is meant to spark happiness. Mendonça's team has also introduced diverse illustrations that are meant to represent an audience of all backgrounds.

See the top news on MuslimMatch

TECH CRUNCH - Feb 12 - Apps saw record downloads and consumer spending in 2020, globally reaching ~$111B to $112B. But a growing part of that spend was subscription payments, a new report from Sensor Tower indicates. Last year, global subscription app revenue from the top 100 subscription apps (excluding games), climbed 34% YOY to $13B, up from $9.7B in 2019. There are some signs that subscription revenue growth may be hitting a peak. Some of the slowdown and otherwise flat growth can be attributed to larger apps, like Netflix and Tinder, which have found ways to workaround the app stores' in-app purchases requirements. 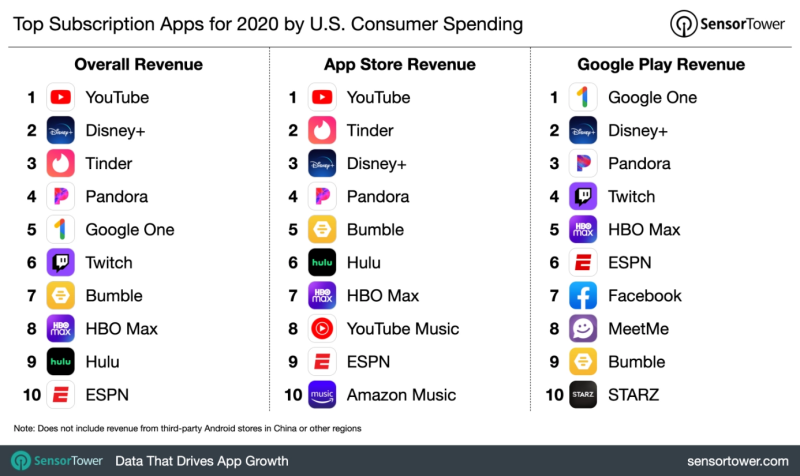 KGET - Feb 12 - Studio 17's Vanessa Dillon talks with Rachel Van Nortwick, creator of Vinylly, about her dating app that pairs users up with someone based on their favorite music.

See the top news on Vinylly

GRATISDATINGTIPS.NL - Feb 12 - Two recent trademark registrations by the Match Group show that Tinder has ideas for its own product line. Match Group registered a trademark with the United States Patent and Trademark Office (USPTO) on January 20, 2021 to protect the term "Tinder Made". Tinder plans to sell protective covers and cases for cell phones; stands for handheld digital electronic devices; lights for use with mobile phone cameras; clothing, footwear and headwear; bags; cups and water bottles; and more.

VEGCONOMIST - Feb 12 - Veggly, the dating app for vegans and vegetarians, is celebrating over a million 'Veg-Matches' and predicts this number will surpass 2M by mid 2021. The founders of the app also reveals that the platform now has ~300K users around the world.

See the top news on Veggly