INSIDER - July 1 - Badoo has introduced a Screenshot Block feature. Android users can no longer take screenshots of the app, and iOS users will get a warning message. The new policy is meant to discourage sharing private information and photos without permission.

The Bullish Case on Bumble

SEEKING ALPHA - Apr 23 - Bumble is set to release Q1 earnings on May 12, 2021. On tailwinds of vaccine rollouts and city re-openings, analysts have high projections for the women-centric dating app.Bumble currently trades at ~$57-27 below its 52-week high. Bumble currently employs 700 people around the globe with offices in Austin, Barcelona, London, and Moscow. The parent company of Bumble Inc. owns the Bumble app as well as Badoo. Bumble, now the second-most popular dating app in the U.S. after Tinder with 55M users in 150 countries, went public on February 11, 2021. BMBL was trading safely between $63 and $73 through much of March but has since fallen ~24% from its highs.

Why Bumble Has Lost Its Buzz

THE MOTLEY FOOL - Apr 15 - After a highly successful IPO, shares of Bumble have fallen 24% from their highs. Bumble benefited from the pandemic-driven stay-at-home economy, as online dating became one of the only mediums to meet a match. Yet despite the seemingly perfect environment for its business, the company still struggled to generate positive earnings. The company faces a drag on its business from Badoo, whose revenue per paying subscriber fell 9.8% in 2020. Bumble suffered an overall net loss of $142.8M, which was in stark contrast to the $85M profit in 2019. The swing owes to a significant 74% ($292M) increase in operating expenses, which grew much faster than the 19% increase in revenue. Granted, some of the additional expenses may not recur in 2021.

The Tech Billionaire Who Is Putting Women First

BBC - Apr 8 - The co-founder of dating app Bumble, Whitney Wolfe Herd, has joined Forbes list of the super-rich. The 31-year-old became the world's youngest self-made female billionaire when she took Bumble public in February. Before Bumble, she was among the founding team at Tinder but after tensions with other executives - one of whom she had been dating - she left. The central focus of her app is that only women can initiate a conversation in heterosexual matches. She founded Bumble with help from early investor Russian billionaire Andrey Adreev, who also had a stake in Badoo, both of which he sold in November 2019. Ms Wolfe Herd owns a 11.6% stake in Bumble, giving her an estimated net worth of $1.3B. She also heads Badoo. The two apps have a combined 40M users, 2.4M of whom pay a subscription.

APN NEWS - Mar 23 - According to data by Finaria.it, the combined revenues of the top five dating apps globally hit $100M in January. As the most-profitable dating app, Tinder generated $64.6M in revenue that month. Tinder in-app purchase revenues skyrocketed by 250% in three years, jumping from $403M in 2017 to $1.4B in 2020. Bumble ranked as the second-most-profitable dating app, with $18.6M in revenue and 1.8M downloads in January. Bumble users spent $210M on in-app purchases in 2020, six times less than Tinder users. Hinge, Badoo, and Match followed with $8.4M, $5.1M, and $4.3M in revenue in January.

Bumble: a Profit Machine at the Wrong Price

SEEKING ALPHA - Feb 15 - The company is too expensive at the moment despite excellent business results. Bumble has the first-mover advantage in addressing a problem that women have in the dating space. In Wolfe's telling, women are taught to let men be the aggressors. The company's value proposition is very compelling to women and it shows in the demographics of the app: there are 30% more women than men on Bumble. In total, as of Sep 30, 2020, the company had 42M monthly active users: 40.7M MAUs coming from Bumble and Badoo (12.3M MAUs from Bumble and 28.4M MAUs from Badoo). Having grown 49% in 2019, to 855,600 in 2019, Bumble's paid users grew a further 30% YOY, for the first nine months of 2020 to 1.1M. Though the number of paid users in Badoo fell by 9% in 2019 to 1.2M, they grew 10% YOY for the first nine months of 2020 to 1.3M. Wolfe has been an excellent capital allocator, growing returns on invested capital (ROIC) from -39.2% in 2018, to 179.7% in 2019 and 178.8% for the trailing twelve months (TTM) period. Unfortunately, Bumble Inc’s P/E multiple is 51, based on our adjusted earnings per share, which is very unattractive.

SEEKING ALPHA - Jan 20 - Bumble is reportedly seeking a $6-8B valuation. In 2019, Blackstone purchased a majority stake in the company that valued the company at $3B, representing quite a sizable return in a short amount of time. Across its two apps, Bumble and Badoo, the company has 42M monthly active users. Badoo is the fourth-largest (by gross revenue) dating app in the world.

In terms of sizing: Badoo actually has more MAUs than Bumble, with 28.4M as of the end of Sep 2020. This is more than double Bumble's 12.3M MAUs. However, Bumble users are more likely to be premium users; hence, the Bumble brand actually generates ~60% of the combined company's revenue versus ~40% for Badoo. This is why Bumble, despite the smaller user base, is the #2 grossing dating app in the world, behind Tinder. The global online dating market stood at $5.3B in 2020 and is expected to grow 13% YOY to $9.9B by the end of 2025. Despite the rapid and broad adoption of online dating in recent years, only 15% of users are paid subscribers. Given the normalization of paying for multiple services, especially driven by COVID-19, we expect this number to continue trending upward. Bumble's total paid users grew 19% YOY to 2.44M, with the Bumble app indexing at a faster 30% YOY growth rate versus 11% YOY growth for Badoo. 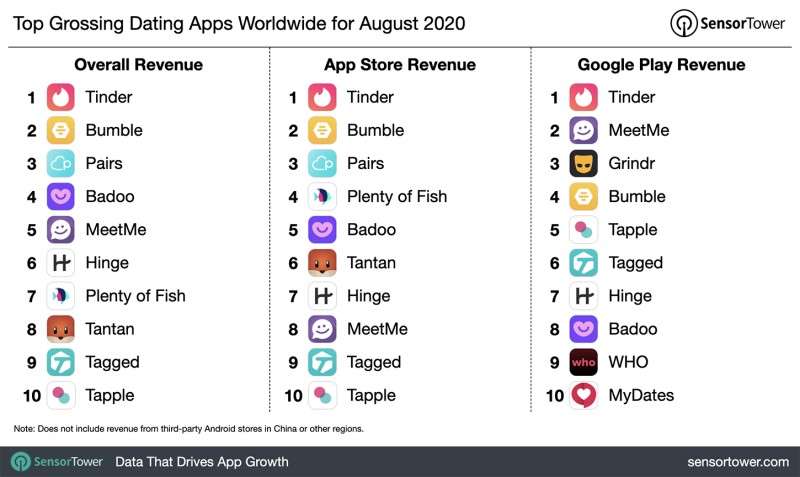 BBC - Sep 2 - On dating app MeetMe, users broadcast live from their phones and then interact with people who tune in. This live vlogging format includes a series of live dating game shows. Livestreamers are paired up to see if there is any chemistry between them. Viewers comment on a "stream" underneath, in real time. MeetMe is part of a suite of dating apps run by The Meet Group. Others include Skout, Tagged (for African-American audience) and Lovoo (an app developed in Germany, which MeetMe bought). Between them they have ~15M users, and on average 180K dating games are played each day, with ~1M people watching the live dates unfold. CEO Geoff Cook describes the platforms as "a public version of speed dating". Plenty of Fish is also currently offering live dating experiences. Badoo has recently experimented with the idea as well.

Mark Brooks: Geoff Cook, CEO of The Meet Group, made a couple of impactful statements in the BBC video interview.  Geoff said, "I certainly believe daters no longer have the risk appetite for meeting many different people in person based on something as shallow as a right swipe." This risk, of course, is heightened right now because of covid.  However, there's always been additional risks when daters meet in-person for the first time. Especially the risk of disappointment when people have misrepresented themselves in their dating profile and photos. The best thing about video is, video doesn't lie, so when people meet in-person, they're less likely to be disappointed, or catfished. Geoff also stated "...Live-streaming video helps...by really emphasizing personalities" which I think is why this new video dating norm will be here to stay. It's so tough for dating apps to really help people get a sense of chemistry.  But with video, users can actually get their first sense of chemistry. That's huge! (Full Disclosure: The Meet Group are a client of Courtland Brooks)

SENSORTOWER - Aug 24 - The top grossing dating app worldwide for July 2020 was Tinder with ~$68.5M in user spending. 40% of Tinder's revenue was from the United States, followed by 6% from Japan and 5% from Great Britain. Bumble was #2 with ~$16.8M in gross revenue. #3 was Pairs, followed by MeetMe and Badoo. 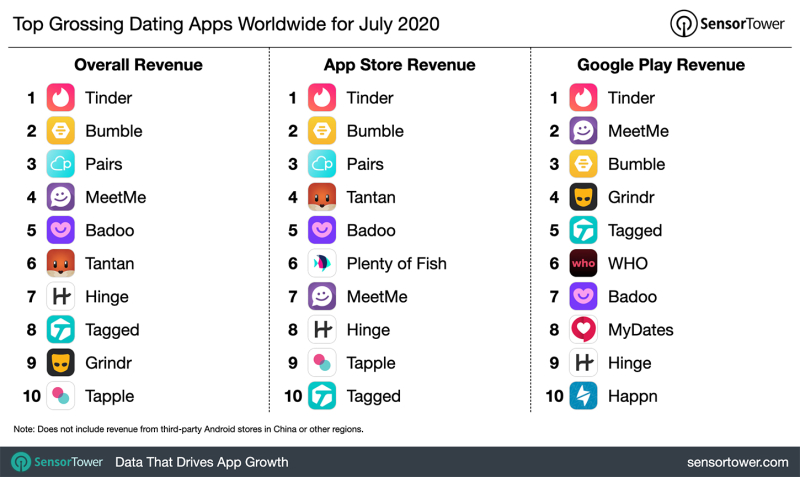 FAST COMPANY - July 16 - Bumble is also announcing a major reorganization and rebranding that will make the company the new overseer of its sibling dating app, Badoo. Until now, the two apps had been under the umbrella of the holding company MagicLab. But that company is being renamed Bumble. Bumble is bringing on a new president, Tariq Shaukat, previously president of industry products and solutions at Google Cloud. Bumble also announced a new board of directors. Led by chairwoman Ann Mather, the former CFO of Pixar Studios, the Bumble board also includes Pamela Thomas-Graham, the author and former CEO of CNBC; Elisa Steele, the chairwoman of Cornerstone; and Matthew Bromberg, COO of Zynga. Bumble and Badoo have a base of 600M users. CEO Wolfe Herd now oversees ~750 employees in Austin, London, and Moscow.