CHINA DAILY - Apr 17 - Industry experts said the "cloud matchmaking" method, which includes livestreaming and short videos, is gaining traction among singles. According to Tantan, the average time people spent on the app in early- and mid-February increased by ~30%. The number of users surged 60% during the peak hour which often runs from midnight to 1am. During the outbreak, those born after the period around 1995 and after 2000 have become the top users of Tantan. They recorded a 20% increase in messages sent and daily matches. Zhenai.com said its active users reached 10M during the Chinese New Year holiday on Jan 24 to Feb 2, an increase of 39% compared with the same period of last year. ~10K people found highly compatible matches on the app. Baihe Jiayuan Network Group's CEO Wu Linguang said video and livestreaming dating services have been launched to lure customers during the epidemic. The time users spend on video dating rose 30% during the Spring Festival holiday YOY.

See full article at The Star

Marriage Rate in China in Decline

ECNS - Aug 8 - According to a report by the National Bureau of Statistics and Ministry of Civil Affairs, the marriage rate in China has been in decline for five consecutive years. In 2013, ~10 people got married for every 1K people, while last year the rate fell to ~7 people. The key age group for marriage is also changing. In a report released by the Ministry of Civil Affairs, people aged 20 - 24 accounted for the highest marriage registrations before 2012, but in 2017 that group had changed to people 25 - 29. This group made up 37% of all registered couples. In a 2018 survey by Zhenai, matchmaking site, ~60% of those classified as single had not dated for three years. It also found that 70% of single people who live in cities feel anxious about how to get into a relationship. The three biggest service providers are Jiayuan, founded in 2003, which claims to have 190M users; Zhenai, founded in 2005 with 170M users; and Baihe founded in 2005 with 100M. users.

Mixing Chatroulette With Tinder - the Future of Online Dating?

GIZMODO - Apr 26 - Dating platforms in China are starting to experiment with livestream. China's biggest Internet dating site Jiayuan first started offering video streaming in January. First, a user would start a streaming session with a set topic, then wait for a second user to join. Then if someone wanted to talk to that host, they would request to join. If the request was accepted, then the two could video chat. That conversation would then broadcast live for other users to watch and comment. There were a lot of empty rooms. So the company added third party emcees to serve as matchmaker hosts. It also created a karaoke feature. Since then, two other major dating platforms - Baihehunlian and Zhenai - also added livestream features. Americans have been swiping left and right for more than five years now and are collectively ready for a different online dating experience. 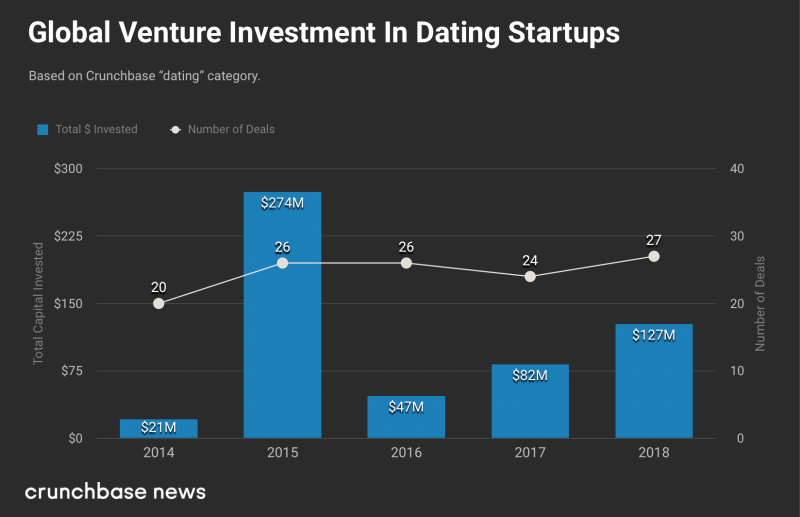 FINANCIAL REVIEW - Jan 3 - Many people in China who want to get married are having trouble finding a partner. China is home to ~200M singles. The combination of freedom of choice and social pressure has become overwhelming for many. Thousands of flirt trainers, marriage brokers and love gurus are now employed in China's quest for happiness. Baihe has ~300M members and 3000 would-be matchmaker employees. The origin of a potential husband is extremely important for well-educated Chinese women, who value prestige and status: things like an apartment and a car. But even the rich struggle with love. The elite agency Diamond Love has 5M members, with the especially well-to-do paying up to $21K a month for "custom services" promising them the wife of their dreams.

SPIEGEL.DE - Aug 4 - As a result of the government's decades long one-child per family policy and a preference for boys, an imbalance of the sexes has developed. For every 114 men in China, there are 100 women; overall, there are 30M more men than women. Those who remain unmarried die a quick social death in the country. The combination of freedom of choice and social pressure has become overwhelming for many. Thousands of flirt trainers, marriage brokers and love gurus are now employed in China's quest for happiness. Baihe, the largest online platform for people looking for someone to marry, has 300M members and 3k would-be matchmaker employees. The elite agency Diamond Love has its headquarters in Shanghai. It has 5M members, with some of them paying ~$15K a month for "custom services" promising them the wife of their dreams. A person's social status in China is determined by the authorities. The so-called Hukou system of household registration, splits all people into two categories: rural or urban. The place where a Chinese person is registered determines their access to doctors, schools - and also to urban, middle-class women. No date takes place in China without someone politely asking about the other person's Hukou status. Someone who moves to the city can, with some luck, attain the same privileges as the people who were born there. The Chinese government long ago recognized that the hordes of frustrated men migrating to the cities are a problem. The party now wants more children and is organizing mass group dates across the country.

SCMP - July 11 - AI will be a key focus for Tantan this year, said CEO Yu Wang. The technology will be used to help the company accurately identify new users, boost the accuracy of advertising, as well as contributing to growth in terms of user numbers and revenues, he said. Mobile dating is a popular trend in China where the number of smartphones outstripped the country's 1.4B population. Even WeChat, the country's most popular messaging app owned by Tencent, whose active monthly users have topped nearly 1B, offers apps such as Shake and Drifting Bottle that give its users more opportunities to get in touch with potential dates. Momo, another popular location-based hook-up app in China, acquired Tantan in February for $760M. Unlike Momo and Tantan, which are mostly favoured by younger users who are more inclined to have casual dates, a number of Chinese apps, such as Jiayuan and Baihe, specifically target those looking for a life-long partner. Revenue generated by China's online dating industry reached 4B yuan ($603M) in 2017, according to iResearch.

THE STAR - June 29 - ~200M Chinese, or 14% of China's population, are single, representing a huge market for online dating apps and matchmaking services. Baihe and its sister company Jiayuan face stiff competition from apps such as Zhenai. Together, the three apps boast market shares of ~65%. They became market leaders through innovation. They enable young singles to connect via live streaming, games, anonymous telephone chats and instant messaging widgets. White-collar professionals in first- and second-tier cities make up ~90% of dating app consumers, according to a latest report by iResearch. An industry report predicted that the total market revenue of online dating services will exceed RM28B ($4.2B) by 2025.

by Cheng Yu
See full article at The Star

TECHNODE - May 4 - Fosun International chairman and business magnate Guo Guangchang plans to purchase a majority stake in marriage and dating site Baihe.com for just under RMB 4B ($630M). Baihe.com's shareholders entered into an agreement with Yuanhong Investment to sell 869M shares at a price of RMB 4.6 ($0.72) per share. Guo controls 100% of Yuanhong, which will make him a controlling shareholder of Baihe.com when the deal goes through. There has been no indication as to when the purchase will be concluded. In Dec 2015 Baihe acquired rival dating and marriage platform Jiayuan for $250M. The company then reorganized to become the Baihe Jiayaun Network Group in September 2017.

TECHNODE.COM - Apr 11 - From Tinder-like Tantan to Momo, to marriage-focussed Baihe, tech companies are taking advantage of increasingly independent young adults. Just under half of China's 1.4B people fall between the ages of 25 and 54 years old. Most are men. Within this total, 200M are unmarried. One study shows that 54M people made use of online dating services in 2016, a number that is expected to increase by 24M, or 45%, by 2022. Baihe was founded in 2005 and claims to have ~100M users. Baihe-owned Jiayuan.com also focuses on marriage-related services. It claims to have ~170M users and operates offline stores in 71 cities. Tantan and Momo are designed for more casual dating. In 2013, the total revenue for the sector was RMB 1.93B. This more than doubled to RMB 4B at the end of 2017 and is expected to reach RMB 5B by 2020. According to researchers, online dating can also have a profound effect on marriage diversity. According to the Center for China and Globalization, the number of foreigners increased by 50% between 2000 and 2013. Additionally, over 1500 foreigners were granted green cards in 2016, a 160% YOY increase. In the same year, the number of cross-cultural marriages swelled by 2.5% in Shanghai.

V3.CO.UK - Mar 19 - China's government, which has just voted to make President Xi Jinping president for life, is to implement the latest phase of its Social Credit System on 1 May, with citizens with a poor social-credit rating to be banned from planes and trains. China's Social Credit System is coordinated by the Central Leading Group for Comprehensively Deepening Reforms. It mashes together information from the country's social insurance database and the criminal records system, as well as information gleaned online. It is intended to penalise not just citizens who have failed to pay fines or taxes, for example, but also people the government deems guilty of 'spreading false information' and 'causing trouble'. The credit score is also shared with Baihe, one of China's biggest online dating services, which promotes subscribers with good social credit scores.

SCMP - Nov 21 - PAG Asia Capital, one of Asia's largest investment firms, has closed a deal to acquire a controlling stake in Zhenai.com, China's largest online matchmaking and dating service provider. The transaction size was not disclosed. Founded in 2005 by Li Song, a former Morgan Stanley executive director, Zhenai.com now boasts ~140M registered users. It is expected to generate revenues of ~1.6B yuan and a net profit of ~200M yuan ($30M) in 2017, according to the company. This compared to the 51.4M yuan ($7.7M) in 2015 net profit of Jiayuan.com, a major rival of Zhenai. Jiayuan was bought by Baihe.com, another matchmaking website last year, resulting in the country's matchmaking business being mainly split among the three companies.

SCMP - Sep 13 - The death of Su Xiangmao, 37, sparked online debate about whether dating sites are accountable for verifying users' personal data. Shares of Baihe.com plunged by almost half after its dating site Jiayuan.com was accused of failing to verify personal information about a woman who allegedly drove her ex-husband, a successful technology entrepreneur, to suicide. The stock traded as low as 3.6 yuan, down 48%, on the National Equities Exchange and Quotations, China's over-the-counter stock market for start-ups. It later recovered some ground, closing 19% lower at 5.68 yuan.

by Laura He
See full article at SCMP