Crown, A New App From Match Group, Turns Dating Into A Game 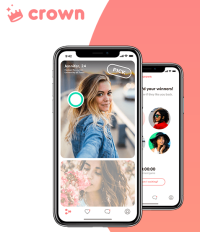 TECH CRUNCH - June 16 - Crown is the latest dating app from Match Group, thought up by Match Product Manager Patricia Parker, who met her husband online. Crown won Match Group's internal "ideathon," and was then developed in-house by a team of millennial women, with a goal of serving women's needs in particular. Every day at noon, users are presented with 16 curated matches, picked by some mysterious algorithm. They move through the matches by choosing who they like more between two people at a time. The screen displays two photos instead of one, and users "crown" their winner. This process then repeats with two people shown at a time, until they reach their "Final Four." Those winners are then given the opportunity to chat, or they can choose to pass. Crown has been live in a limited beta for a few months, but is now officially launched in L.A. with more cities to come. The app is a free download on iOS only for now. An Android version is coming, the website says.