Before Tinder, There Was Operation Match in the US and Dateline in the UK 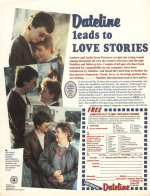 1843MAGAZINE - Apr 16 - In 1966 John Patterson went to visit some friends in America and came home with a business idea. He had observed the workings of Operation Match, a computer dating service started at Harvard in 1965 by two undergraduates, that paired students together for dates for $3 a pop. Students filled in questionnaires which were processed by an IBM 1401 – a hulking, five-tonne machine described as "the great God computer" – before receiving the names and telephone numbers of their matches in the post. Patterson saw potential for a similar system in the UK. That same year, Dateline, which would become Britain's biggest and best-known computer dating service and the pre-internet answer to Tinder, was born. "He managed to negotiate a deal with IBM to rent the computer," his widow Sandy Nye recalled. Singles filled a two-page questionnaire. The returned questionnaires were fed into the computer to be read by an algorithm. Six matches spat out and their contact information forwarded on to customers (by 1981, this service cost £45). By 1970 Dateline had risen to prominence and by 1982 the service had 44K customers, which made it the biggest dedicated dating business in the country. Dateline, which also launched a successful offshoot magazine, Singles, and a singles holidays business, declined after Patterson's death in 1997, struggling to make the shift to digital.