See all posts on Firstdate

See all posts on Firstdate

DAGENS INDUSTRI - June 15 - FirstDate is the fastest growing dating site in Sweden, growing by 55% annually. Firstdate was founded in 2006 by friends Chris Engleus and Martin Trollborg, and officially launched in Dec 2008. Match and Meetic are strong in the Nordic region and became even stronger when they merged in 2009. “We came in very late and had to have a different concept. The existing sites are focusing on older people. Our target group is 18 – 35-year old. In 2009, Firstdate's revenue was SEK 10M ($1.5M). Last year the revenue almost doubled to $3M with $1M profit. This year FirstDate is expecting $5M revenue.

OPW - Sep 25 - This is probably the biggest dating ad I've seen yet.  On a recent trip to Stockholm I discovered this bus with a huge ad for Firstdate.com. 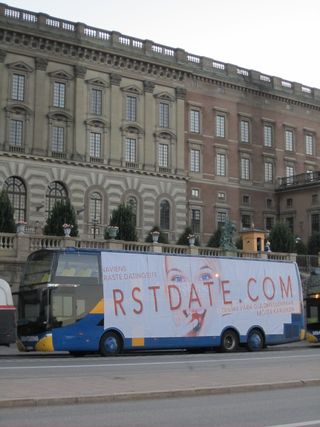