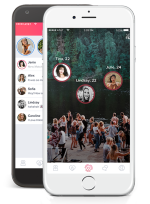 BBC - May 9 - Dating app Flirtar is the first to use augmented reality (AR), but there are several more on the way. Feed, a platform for singles and couples, is launching a platform called Signal, while mainstream apps like Tinder could also expand with AR. Flirtar is only a few months old, but its international user base already stands at ~5K, 10% of whom are in London. The apps is like Pokemon Go, but instead of pokemons, the app shows singles who are using the same augmented reality app. Their faces are circled on a screen as users pass them physically in the street. It feels like a game. When a bubble pops up, it shows a picture of the user in question, along with their name and age. To chat to someone, users have to 'like' them. Flirtar's CEO, Anderson Gobbi, says it "bypasses the disappointment and frustration created by fake profiles" as profiles are only tagged to physically present users.

See all posts on FlirtAR

MASHABLE - Oct 3 - FlirtAR, pronounced "flirter," is launching for iOS. (It'll be available for Android at the end of this month.) It uses AR to help users find potential matches who are nearby. It uses geolocation to find people close by. Another feature lets users move themselves on the map to a different location and view potential matches there, though people can see that they're not actually there and are just scoping out the scene. The app is planning to introduce a premium tier of services in the coming months.

See all posts on FlirtAR

TECH.CO - June 16 - FlirtAR is a mobile app for Apple and Android that uses augmented reality to find a match. "It will use facial recognition, geolocation, and augmented reality to show user dating profiles and begin conversations with potential dates in the real world and in real time," said Renan Godinho, founder of FlirtAR.