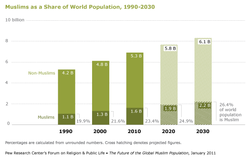 DATINGBEESKNEES - Dec 2 - Online dating has become increasingly popular among Muslims. According to new population projections by the Pew Research Center’s Forum on Religion & Public Life, “the world’s Muslim population is expected to increase by ~35% in the next 20 years, rising from 1.6 billion in 2010 to 2.2 billion by 2030.” This growth is roughly at twice the rate of the non-Muslim global population for the next two decades. There was a quote in the article by the halfourdeen.com founder that struck a nerve: “Baba Ali explains that what is more worrying for him is the fact that a number of Muslim matchmaking sites are owned by non-Muslims.” Is Baba Ali implying that non-Muslim entrepreneurs should not have the opportunity to sit at the table and have a piece of this pie? The issue is not who’s behind the service, but rather how you are serving your customers.

by Saïd Amin
The full article was originally published at DatingBeesKnees, but is no longer available.