TECH CRUNCH - Hinge is introducing a new "Self-Care Prompts" feature that is designed to inspire initial conversations between matches about self-care priorities. Hinge's in-app prompts are conversation starters that users answer as part of their profiles and are displayed to potential matches. There are 15 new self-care prompts that users can answer and add to their profiles.

ECONOMIC TIMES - Organic traction for its dating app Hinge is exceptionally strong in quite a few untapped international markets and it has huge potential globally, the company said. "We've seen a recent surge in organic traction in India without any localization. So, we want to respond to these types of positive signals, and we are accelerating our launch in India," Shar Dubey, CEO of the Match Group. The app is on track to launch in its first non-English speaking market, Germany, in the Q2.

Tinder Crushes the Dating App Scene, but Its Rivals Are Winning Hearts 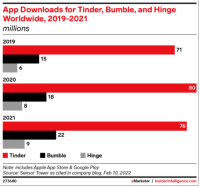 EMARKETER - Bumble and Hinge attracted more downloads worldwide in 2021 than the previous two years. Meanwhile, Tinder outpaced them both by at ~54M downloads. As of January 2022, the monthly active user base across all three dating apps had grown 17% over the same month in 2019. Hinge posted the fastest growth during this period, at 344%, while Bumble registered a 96% increase. Tinder's already massive user base, however, stayed roughly the same size.

ADWEEK - Tinder, Ourtime, Match, OKCupid, Hinge, Plenty of Fish and Grindr are promoting vaccinations to their users. Ahead of Valentine's Day, the apps have allowed users to display vaccination badges and stickers on their dating profiles to advertise their Covid-19 status to increase their chances of finding a match. Data from Hinge has claimed that its users who share their vaccination status on dating apps receive 30% more matches than those who don't. OKCupid has seen ~1M of its users add a badge stating "I'm Vaccinated" to their profile pages, while Grindr also claims that the badge is among its three most popular.

GOOD MORNING AMERICA - Hinge has been playing matchmaker with the help of user-uploaded audio clips. "65 to 70% of our users were having trouble assessing chemistry," said Michelle Parsons, Hinge's chief product officer. Users can now upload 30-second audio clips to their profiles, in place of written responses to prompts. According to Parsons, since October, "over one million of Hinge's users have now recorded and uploaded a voice prompt. And ~70% of users have actually played a voice prompt." Some Hinge users have even added clips of songs to their voice prompts, allowing potential matches to listen to music while reading their profile.

MORNING BREW - Jackie Jantos has been preparing for her new role in more ways than one. With experience at companies like Ogilvy, Coca-Cola, and Spotify, Jantos is also an online dating success story: She met her husband on Match.com. Right now, Hinge only captures ~2.5% of the global dating app market share, but Hinge claims it's the fastest-growing dating app in the US, UK, Canada, and Australia. This year, Jantos said, the company will localize its language offerings in countries like Germany and Sweden. Right now, the app is available in those countries, but only in English. Another one of Jantos's tasks for the year is growing its Gen Z and LGBTQ+ audiences in the US. She won't say what features might come next, but says the company continues to focus on how to help users "express themselves in different and unique ways," adding that users should expect updates to profile development this year.

WALL STREET JOURNAL - Dating apps are giving users the ability to add voice recordings to their profiles. Last October, Hinge added Voice Prompts to its user profiles. "~65% of our users were saying getting to hear someone's voice earlier on in the dating journey would be really valuable," said Michelle Parsons, chief product officer at Hinge. In June 2021, Tinder gave users the ability to add video recordings - including voice - to their profiles. The League dating app did the same back in December 2019. A quarter of League users are taking advantage of the technology.

FOX BUSINESS - Hinge launches Valentine's Day campaign to help parents pay for babysitters. Starting on Friday, Feb. 4, users will receive an opt-in notification for the holiday campaign at noon EST. Eligible users who have children and enable the campaign will get a chance at earning a $100 child care gift card if they comment on a potential match's profile. Hinge plans to give away up to $25K in gift card stipends.

Match Hopes Hinge Can Be Its Knight in Shining Armor

WALL STREET JOURNAL - Match Group reported mixed Q4 results on Tuesday with adjusted operating income coming in just above Wall Street's estimate, while both Tinder revenue and total revenue growth fell slightly short of analysts' expectations. Match attributed the revenue shortfall to foreign exchange and lingering effects of Omicron. Match talked more about relationship app Hinge. Match now says Hinge did just under $200M in revenue last year and forecasts that revenue would grow to ~$300M this year. Hinge's payers increased ~60% in the Q4 quarter versus the same period of 2019 with revenue per payer growing ~300% over that period.

BUSINESS INSIDER - Hinge has hired Coca-Cola and Spotify marketing vet Jackie Jantos as its CMO. Jantos will broaden Hinge's appeal among GenZ and LGBTQ+ daters. She will also oversee international expansion into markets like Germany, France, and Sweden. She was most recently CMO at data privacy and management company Dashlane. Jantos succeeds Nathan Roth, who was Hinge's CMO between 2018 and 2021. The app plans on increasing its multi-million marketing budget by 25% compared to 2021, according to the new CMO.

According to Hinge, Therapy Could Be the Secret to a Flourishing Love Life

WOMEN'S HEALTH - According to research conducted by Hinge, the last two years have seen singles prioritize mental health more than ever. The company found that when it comes to dating, mental health isn't just an attractive quality but a necessary one, with daters admitting they aren't accepting anyone who isn’t doing it. 89% of Australian Hinge singles would prefer to date someone who goes to therapy.