HORNET - Mar 25 - Starting March 24 on Hornet for iOS, users are now able to add adaptive, machine learning-composed soundtracks to their video stories. It will be coming to Android soon.

See the top news on Hornet

Christof Wittig - Communities Are the Future of Online Dating

LTR CONFERENCE - Feb 2 - High churn, customer acquisition costs, and short user lifecycle are several challenges faced by dating services. According to Christof Wittig, CEO of Hornet, building communities in online dating is an excellent way to improve user experience. He believes that community is the future of dating. Creating places where users can interact around common interests can facilitate long-term user engagement and increasing retention. Christof Wittig explains the benefits of building communities in the latest video in the LTR Conference series.

LTR stands for Love, Technology, Relationships and the online conference covers the Internet dating and Online Social Communities space. It is for members of IDEA and OSCA.

The November LTR was kindly sponsored by RealMe, vPaaS by The Meet Group & Utopia Analytics.

PINK NEWS - Mar 13 - Grindr and other gay dating apps have begun issuing alerts to users with guidance about the risks of coronavirus. COVID-19 itself is not sexually transmitted, but it can be spread through kissing as well as through coughing and sneezing, The alert directs people to WHO guidance, which states: "Stay at home if you begin to feel unwell, even with mild symptoms such as headache and slight runny nose, until you recover." Scruff and Hornet have also issued coronavirus warnings.

BBC - Oct 28 - In a bid to tackle fake profiles and fraudsters, gay dating app Hornet plans to offer a sort of "verified" badge to identify authentic members. But rather than moderators checking ID, the app will use algorithms to decide who gets a badge. So why do gay dating apps not offer a "verified" profile badge, like on Instagram or Twitter? "Not everyone wants to or even should be identified," said Eric Silverberg, CEO of dating app Scruff. ID checks would create a list of "verified LGBT people" that could be used by those wanting to do harm, including governments. Hornet says its system will not involve checking ID. Instead, algorithms will evaluate how people behave on the app over time. Profiles that are judged to be genuine will display a "Hornet badge" as an indicator of trustworthiness.

HORNET BLOG - May 23 - The LGBT Foundation, the world's only token and blockchain initiative aimed at empowering the LGBT+ community, has appointed its first CEO, Sean Howell. Howell currently serves as President of Hornet, the gay social network, where he has spent the last six years helping the company grow its user base to 25M. At Hornet, Howell also oversaw the company's corporate responsibility efforts under Hornet Impact, organizing thousands of social justice and health related activations annually, all over the world.

HORNET BLOG - Apr 20 - Hornet Gay Social Network is partnering with Planned Parenthood Federation of America as well as the LA LGBT Center to build a culture of consent and respect within the LGBTQ community. Together they'll be creating and sharing social media and editorial content to educate users on why and how to talk about consent.

HORNET BLOG - Jan 17 - Hornet, the gay social network, has released its first-ever research with Nielsen around the efficacy of LGBTQ-themed branded advertising on the LGBTQ consumer. The custom study examines advertising content across various industries including consumer packaged goods, hospitality, automotive and banking.

Amongst its key findings:

HORNET BLOG - Jan 13 - Hornet, the gay social network, launches an LGBT Foundation, a not-for-profit organization for the global good of the lesbian, gay, bisexual, and transgender community. The LGBT Foundation will conduct an Initial Coin Offering (ICO) in the Q1 2018 to raise funds and allocate cryptocurrency tokens to private investors and individual participants. 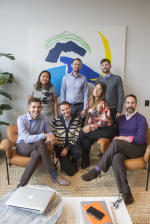 REUTERS - Oct 23 - After a rainbow flag was raised at concert headlined by Mashrou' Leila, whose Lebanese singer is gay, over 70 people have been arrested in Egypt. Gay dating apps such as Grindr and Hornet are sending users tips on how to protect themselves from entrapment.

by Nigel Campbell
The full article was originally published at Instinct Magazine, but is no longer available.