Where Are They Now: Marina Glogovac, Former CEO of Lavalife, Now CEO of Toronto Star

OPW - Marina Glogovac worked with Lavalife from 2004, first as the Chief Revenue Officer and then as CEO in 2006. She stepped down as CEO of Lavalife in April 2009 and joined Kobo, an online book retailer, as its CMO. What's Marina up to now? She is set to take over as CEO of the Toronto Star.

We asked Marina if there are any lessons she will take between media and dating? She replied "I actually took many lessons from media to dating as I worked in media for 15 years prior to joining Lavalife. I was able to use the skills in acquiring new subscribers and growing the lifetime value. There is a very deep relationship between readers and media in the media world....people feel so passionately about their favorite papers. It's about engagement and knowing your readers exceptionally well. It's really an art of developing lasting and exciting relationships. I am out of the dating industry but can see how vibrant and successful it is. It will be interesting to see the innovation further enabled by invisible UI, AI, and virtual reality. Finding a partner is a vital human need, and it bodes well for the dating industry. And I can say the same for content and media."

We wish Marina the best in her new role. Please let me know if you spot any more stories or updates about people who have been in the dating industry. - Mark Brooks, mark@courtlandbrooks.com

CBC - Feb 14 - According to IBISWorld, the number of companies in the dating industry in Canada is expected to continue to expand, by 3.5% this year and 3% the following year. As the stigma around online dating has faded, it's also become a highly competitive and crowded industry. But in both Canada and the U.S., revenue is forecast to grow more slowly over the next five years. In Canada, online and mobile dating revenue is ~$112.7M, just a fraction of what it is in the U.S., at $2.4B, according to IBISWorld. Bruce Croxon, co-founder of Lavalife, was on CBC's Dragons' Den from 2011 to 2014, and currently invests in digital startups through another company he co-founded, Round 13 Capital. But those with a dating service pitch should probably look elsewhere. "When I see start up dating apps come through our door I say interesting, but no thanks," Croxon said. "It is an industry that, to me, had its day." 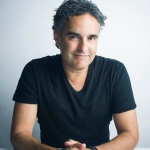 ITWOLRD CANADA - Apr 14 - If Bruce Croxon could go back to 1988 and his startup days at Lavalife again, he'd put his CIO at the centre of the company. There's no doubt Lavalife was a success, attracting 2M users, and making an exit worth $180M. But Croxon realizes that if he tried to run a startup founded in 2017 in the same way, it'd only lead to heartache and debt. Croxon says the role of the CIO is becoming more important. "The tools available to figure out the gap between what a customer costs and what a customer is worth are now available to even small businesses," he says. "It's the CIO's job to figure that out." Those tools weren't available in the days Croxon was running Lavalife.

BETAKIT - Jan 30 - Bruce Croxon, founder of Lavalife, sat down with Markus Frind, founder of POF, for an interview. While Lavalife had 400 employees and a paid service, Frind worked on the site alone and made it the largest dating site in the world. Frind said he wasn't too focused on beating Lavalife, and instead turned toward the US market. Lavalife was sold in 2010 for ~CAD$ 200M. POF was sold to The Match Group for ~CAD$ 800M ($575M).

Lavalife Is Relaunching This Week

CNW - Nov 18 - Lavalife.com, Canada's longest standing dating site, is ready to unveil their new website. Lavalife is moving away from algorithms. Its new campaign ads will start to populate in January 2015. The focus of the creative will focus on "fun and exciting moments" of dating rather than the end result, with two people sharing experiences and interests rather than highly romantic and intimate moments.

The full article was originally published at Broadcaster Magazine, but is no longer available.

'No Asian. No Indian': Picky Dater Or Racist Dater?

THE GLOBE AND MAIL - Feb 23 - Racial filtering is alive and well on mainstream dating and hookup sites, which give users the option of checking ethnic preferences alongside ideal body types and social habits like smoking and drinking. While most critics agree that the ethnicity checkbox is vastly preferable to specifying 'No Asians,' they disagree about whether the option is a step backward. Is it any different than hunting through niche sites like Shaadi or JDate? Grindr acknowledged that users can list race in their preferences, but can be banned for posting material "perceived to incite racism". "We also encourage our users to state what they are looking for as opposed to what they are not looking for." A dating poll of 2K Lavalife users found that 74% of women surveyed said ethnicity affected their dating decisions, compared with 49% of men. "Men are more open to meeting people from different communities. They tend to concentrate on physical aspects whereas women are much more interested in lifestyle and background," said Justin Parfitt, CEO of speed-dating company FastLife International. "People should be free to have sex or not have sex with anyone they want", argued Harry Reis, a psychology professor at the University of Rochester who co-authored a review of 400 studies on online dating. "In my estimation, it is fine (although self-limiting) to be racist with regard to sexual preferences", he said. "Throw out the checklist," Mr. Parfitt advises. "What you think you want and where you end up finding chemistry are often two very different things."

by Zosia Bielski
The full article was originally published at Globe and Mail, but is no longer available.

PR NEWSWIRE - Feb 7 - On February 9, ahead of Valentine's Day, singles throughout Toronto should boldly ride the first car of the subway train during their daily commute. To celebrate, a street team will be in place at the bustling Yonge and Eglinton stop to distribute free Lavalife.com buttons, which singles can discreetly wear to help identify each other.

PR NEWSWIRE - Sep 27 - In the upcoming movie, "What's Your Number?" Ally, played by Anna Faris, is told by a group of girlfriends that women who have had more than 20 sexual partners will not find a husband. The movie begs the question, "What is an acceptable number of partners?" 79% of single men and 94% of single women agree there is still a gender bias of "stud" versus "tramp." When asked if they were comfortable dating someone who has had more sexual partners than themselves, 7% of men and 77% of women answered "yes."

The full article was originally published at Market Watch, but is no longer available.

THE GLOBE AND MAIL - Apr 15 - When Sean Miller got into the online dating world, he saw opportunity in providing people with second telephone numbers that could be used just for dating, and would be less expensive and easier to get than through a major telephone company. It took him 18 months to develop Tigits. Mr. Miller was also able to bring on Bruce Croxon, co-founder and former CEO of Lavalife as an adviser and investor. The service, which includes voice mail and will soon offer text messaging, costs $9.99 a month after a 30-day free trial. Tigits’ customers get a second telephone number that works just like their regular number. They can block callers, switch number and stop their service at any time.

by Mark Evans
The full article was originally published at Globe and Mail, but is no longer available.

Mark Brooks: Vumber came three years earlier with the same solution. It's good for end users, but not good for dating sites. The service is too disconnected from dating sites.  Match and FriendFinder integrated Jangl (which was later sold to Jajah). Jangl/Jajah is a better solution for dating sites because it keeps users connected to the dating site. Users simply hit a 'call this person' button on Match. (Full Disclosure: Vumber and Jangl are prior clients of Courtland Brooks)

PR NEWSWIRE - Feb 1 - This February, Lavalife.com, is offering a 30-day free trial to all new members. During the 30-day free trial, new members can send unlimited mail and instant messages and even see who has checked them out.  Members will also get to experience the all-new Virtual Dating feature on Lavalife – bound to be a hit with Valentine's Day fast approaching. Members can get to know other singles and go on a Virtual Date by creating a personalized avatar and selecting a fun destination.

OPW - Dec 3 - [Breaking news, you heard it first on OPW]. Lavalife was sold on November 30th to First Media Group. The group also operates Quest Chat lines and QuestPersonals.com, a competitor to Lavalife's telemedia and online business. Ron Duke, the CEO & CFO has left, and Peter Housley, the President and COO of First Media Group has resumed his role as CEO of Lavalife. He was CEO in 2003 and was the original brand architect. No numbers have been released.

Lavalife Reveals The Fate Of The Turkey Baster

PR NEWSWIRE - Aug 24 - The new movie, "The Switch" starring Jennifer Aniston and Jason Bateman tells the tale of a 40-year-old woman who wants to find the "right" sperm donor and have a baby on her own. Lavalife asked singles: "Would you donate your sperm or eggs for a friend who wanted to have a baby?" 63% of men and 48% of women surveyed said yes. A recent article by Lisa Daily in Lavalife's online magazine, "Click," discusses how smart women are choosing to have children by themselves in record numbers. According to the 2000 Bureau of the Census, non-marital cohabitation, separation, and divorce have become more common, as has remarriage. Half of all children in the US lived or will live with only one parent before reaching adulthood. Most one-parent families (86%) are headed by mothers. FULL ARTICLE @ PR NEWSWIRE

OPW - Aug 3 - Why would anyone buy a book these days. Save the paper, and enjoy your reading more by using an e-reader. Marina Glogovac worked with Lavalife from 2004, and was CEO from 2006 through 2009. She is now the CMO of Kobobooks which offers an impressive little reader for $149, along with an ipad app, and reader apps for numerous devices. They have top notch books at sub $10 pricing and look set to give Amazon's book department a run for their money. You can see our CEO interview with Marina here. Congratulations Marina.

OPW - May 31 - Lavalife sent out an email to members letting them know they've worked out the kinks in their site redesign. A new IM system is mounted to the bottom of the screen. Photos are now larger. Nav has been improved.