BLOOMBERG - Jan 26 - Sharmistha Dubey, the CEO of the Match Group, breaks down what love in the time of Coronavirus is like for Match Group's users. She speaks to Mark Miller at Bloomberg's "The Year Ahead."

DALLAS BUSINESS JOURNAL - Jan 22 - The price target for the company's stock rose to $169 from $157. Match is benefiting from growing demand for its services as more folks retreat to their smart phones instead of hitting bars and restaurants. The company saw double-digit revenue growth in the Q3. Morgan Stanley highlighted the potential for Tinder. It said its "Mobile App Download" tracker pointed to an increase of Tinder subscribers of 320K, or 17%, in the Q4 compared to the firm's estimates of 280K and a consensus for a jump of 250K. Hinge should show growth of about three-fourths.

BBC.COM - Jan 19 - Bumble has reinstated its political preferences filter after disabling it "to prevent misuse" in the wake of the US Capitol riots. Following the violence, reports emerged online of some Bumble users switching the filter to find those who had taken part - and report them to authorities. Match Group has banned any users wanted by the FBI in connection with domestic terrorism from all of its platforms.

WASHINGTON POST - Jan 18 - Bumble, Tinder and others are freezing out rioters with help from law enforcement and, in some cases, their own photos. Other app users have taken matters into their own hands by striking up conversations with potential rioters and relaying their information to the FBI. Some onlookers have celebrated the viral hunt as a creative form of digital comeuppance. But some privacy advocates said the episode reveals a worrying truth about pervasive public surveillance and the opaque connections between private companies and law enforcement. Both Bumble and Match Group said they were working to remove users known to be involved in the Capitol siege from their platforms.

BUSINESSWIRE - Jan 12 - In 2019, FFN discovered it had overpaid PlentyofFish by $116K for members sent to AdultFriendFinder over the course of a business relationship that goes back to 2011. Unfortunately, PlentyOfFish refused to correct this overpayment, and it was necessary to file litigation. FFN has paid over $13M since 2011 for the members PlentyOfFish sent to its adult websites.

How Tinder Became the App That Defines Online Dating

FINANCIAL TIMES - Jan 8 - In the Q2 of 2020, Tinder reported a record 3B swipes in a single day. Shares in parent company Match, whose subsidiaries also include Hinge and OkCupid, traded at a record high in mid-December as it joined the Nasdaq 100. Rival Bumble has taken the opportunity to reportedly file for an IPO. When Match listed in 2015 it priced its shares at $12 each. They now change hands for $153. Success is down to Tinder's relatively simple set-up. Tinder, which accounts for more than half of Match's 11M subscribers, has a subscription level that allows users to see who likes them. This lure has helped Tinder convert free users to subscribers without spending large sums on marketing. Five years ago, Zoosk revealed that it was spending 84% of revenues on marketing before it pulled plans for an IPO. Tinder spent the equivalent of 20% of revenue on marketing in the most recent quarter.

TIMES SQUARE INVESTMENT JOURNAL - Dec 17 - Acquired by Match Group in 2018, Hinge reported ~88% increase in revenue YOY in the Q3, along with niche apps like BLK and Chispa that match people based on their cultural backgrounds. In comparison, Tinder grew its revenue by 15%. Hinge brands itself as the anti-Tinder by appealing to daters suffering from swiping fatigue. Hinge's user base has grown from ~35K subscriptions before Match acquired it to 400K subscribers this year. It is estimated it will have ~8M subscribers in 2030 and $2.8B in revenue compared to $60M in 2020. Amid Hinge's boom, Tinder's slowdown indicates it has grown as big as it can. Match needs a different strategy to remain competitive. "The only way now that it can grow is by taking a more niche-oriented route," said Mark Brooks, who consults with online-dating companies on marketing strategies through his agency, Courtland Brooks. Bumble's growing popularity is a threat. With ~100M users globally, Bumble is going public next year, seeking a valuation of $6B. "Bumble is brilliant because what they've done is soaked up the most in-demand women," said Brooks. "The in-demand woman on a Match platform is going to get inundated." Match planned to acquire Bumble for $450M in 2017, but Bumble rejected the offer. Match acquired Hinge instead. It also launched niche dating apps including BLK and Chispa for the Black and Latino communities. "Match has always had a hard time with niches," said Brooks. "They like large scalable dating platforms." Besides BLK and Chispa, Match recently launched other community-based apps in the U.S., including Upward for Christians and acquired marriage-minded service Hawaya for Muslims.

DALLAS BUSINESS JOURNAL - Dec 15 - Match Group is joining the Nasdaq-100 Index, which will become effective prior to market open on Dec. 21. The move puts Match among a list of the 100 largest non-financial companies on the Nasdaq Stock Market. It's an index that acts as a benchmark for financial products such as options, and gets attention in the financial press for market watchers. Shares of the company are up ~35% in the past three months, outpacing the gains of the Nasdaq-100 of ~10%.

The Stickiest, Most Addictive, Most Engaging, and Fastest-Growing Social Apps

ANDREESSEN HOROWITZ - Dec 14 - Currently, two of the fastest growing categories across the social app ecosystem are friend discovery and vertical communities (those that enable further engagement around specific subjects or activities). Facebook apps account for more than half of all monthly active users across non-gaming mobile social apps. Even with just 1% share of active users, Tinder claims well over 5M daily active users and brings in ~$1B in revenue for Match Group each year. 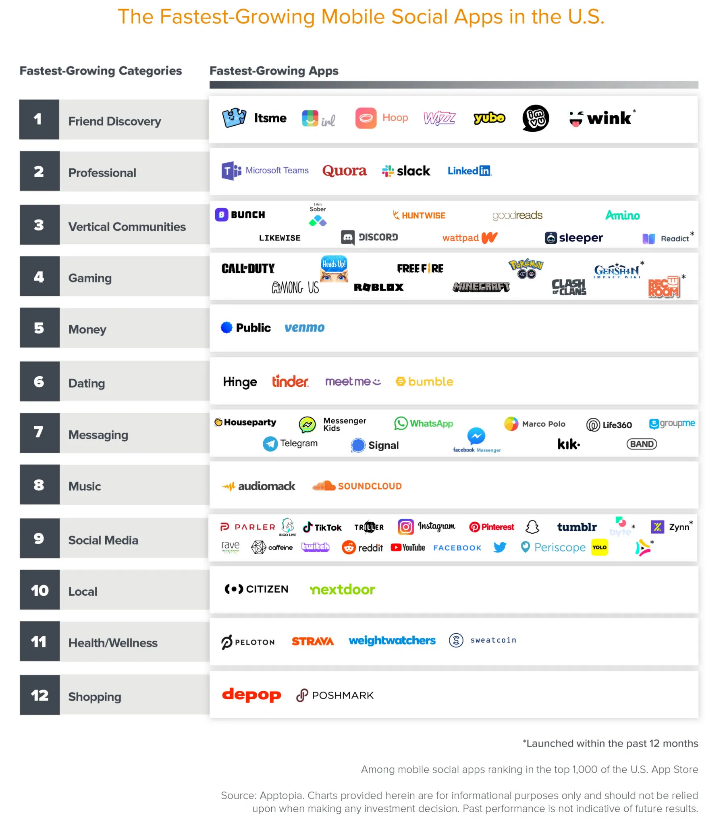 THE MOTLEY FOOL - Dec 8 - The company's stock is up 65% year to date and has scaled new all-time highs as growth has been boosted by the pandemic. Match's Q3 earnings demonstrated the resilience of its dating app business as the company continued to post steady growth. Revenue rose 18% YOY to $640M. Tinder now takes up more than half of the company's total revenue and is the highest-grossing app within the Lifestyle category in ~100 countries.

by Royston Yang
See full article at The Motley Fool

Match Group and RAINN Enter Into Partnership on Dating Safety

PR NEWSWIRE - Dec 7 - Match Group partners with RAINN, the nation's largest anti-sexual violence organization, to conduct a comprehensive review of sexual misconduct reporting, moderation, and response across Match Group's dating platforms and to work together to improve current safety systems and tools. The initial phase of the review will focus on Tinder, Hinge, and Plenty of Fish. RAINN is a founding member of the Match Group Advisory Council, a group that includes leading experts and advocates involved in the study and prevention of sexual assault, sex trafficking, abuse, harassment, and similar issues. The council is the first of its kind in the industry, and regularly makes recommendations on how to improve safety on Match Group platforms.

PAPER MAGAZINE - Dec 4 - Launched in the summer of 2017, BLK was created by the Match Group with young Black singles specifically in mind. Since then, BLK's been downloaded ~4M times and has become the fastest growing app in the Match Group family, which the app's Head of Marketing and Brand Jonathan Kirkland said "speaks to the fact that BLK was something that the community needed and wanted." Amidst this summer's Black Lives Matter protests, BLK's main focus has shifted from "just dating" to building a community hub where Black singles can connect and feel supported. Kirkland added that one of their biggest goals now is ensuring that BLK continues to be an app where Black women in particular feel safe, respected and desired, before citing a 2014 OkCupid study which found that Black women were liked at far lower rates than women of other races.

See the top news on BLK

LAW360 - Dec 1 - Siding with the Match Group, the Trademark Trial and Appeal Board is refusing to let "Political Tinder" be registered as a trademark. The board said the trademark sought by an entity called RLP Ventures LLC would be confusingly similar to Match Group's Tinder. Political Tinder is not a dating app but a website featuring information about political issues.