THE MOTLEY FOOL - Mar 25 - Match Group is launching The Dating While Distancing Hotline, a free service where daters can chat live with an expert for free about concerns they have regarding the current dating scene. Callers can get advice on how to navigate quarantines, setting up successful video dates, and more. Match's advice hotline number is 888-302-6224 and is open Monday through Friday, 8 a.m. to 8 p.m. CST.

PR NEWSWIRE - Mar 24 - In its Top Publisher Award, App Annie recognizes the most innovative and successful publishers around the world. The Top 52 Publishers, as measured by app store revenue estimates in the last calendar year, are from 12 countries. Again this year, publishers from Asia dominate the list. The United States had the most top publishers of any country, with 17. "Dating apps have had strong growth on mobile for the past several years," said Justine Sacco, Chief Communications Officer for the Match Group (IAC). "To have Tinder as the top ranked app of all non-gaming apps globally, proves how central mobile experiences are to our customers and to our success."

BLOOMBERG LAW - Mar 17 - Bumble has established a "reasonable likelihood" that it will succeed in invalidating a Match Group patent for computer dating. Patent covers steps that include swiping left or right to indicate disapproval or approval and then setting up communication between the two people if both sides express interest. The patent office is already reviewing the validity of two other Match patents based on Bumble challenges, with decisions expected by the end of the year.

TECHXPLORE - Mar 11 - Match Group publicly endorsed a US bill others in the tech industry fear will erode online privacy and speech in the name of fighting child abuse. "We don't casually lend our support to this legislation," Match Group CEO Shar Dubey said in an online post. "We must balance concerns around privacy with concerns around safety - which sometimes can be in conflict." Lawmakers say the bill - Eliminating Abusive and Rampant Neglect of Interactive Technologies Act (EARN IT) - allows companies to "earn" their liability protection, by gaining certification of compliance from a commission of government, industry, legal and victim group representatives.

AXIOS - Mar 11 - Match Group will publicly support the EARN IT Act, a bipartisan Senate bill to combat online child sexual exploitation. EARN IT would require tech platforms to comply with government-developed best practices to prevent online child sexual exploitation. If they don't, they would lose some of the liability protections they have under Section 230 of the 1996 Communications Decent Act.

YAHOO LIFESTYLE - Mar 5 - Former Match Group CEO Mandy Ginsberg shared her "emotional and complex" decision to resign from Match Group, after testing positive for the BRCA1 gene. She explained her March 1st resignation in an essay for Fast Company: "It was an emotional and complex decision. This job has been the most fulfilling and impactful role of my career. But a one-two punch of personal issues forced me to take a step back and reprioritize." Ginsberg explained that after the October tornado, a series of which caused a reported $2B in damages throughout Texas, her family was displaced. Throughout the stress and her nonstop work schedule, Ginsberg missed voicemails from her doctor stating that the FDA had recalled her breast implants, which she got after testing positive for the BRCA1 gene. "This would mean another round of surgery to remove and replace my implants, along with a weeks-long recovery," Ginsberg wrote in Fast Company. "This would be my fourth surgery to prevent breast and ovarian cancer. After sitting down with my husband over the holidays, I knew there was no way I could balance my personal needs and my job as CEO."

SEEKING ALPHA - Mar 3 - Match Group faces some virus impact in the near term, trimming growth estimates to 14% from a prior 16%. "Fewer people will want to go on dates" and reflects a conservative approach to the virus impact, analyst Brent Thill says. 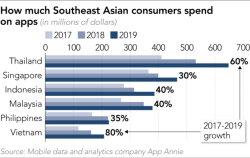 NIKKEI ASIAN REVIEW - Mar 1 - Indonesians spent $5.8M on mobile dating apps last year, compared to $1.6M in 2017, a 260% increase, according to App Annie. Singapore singles accounted for the biggest spend of any Southeast Asian country, shelling out $7.1M last year, up from $3.9M in 2017, which App Annie attributed to the country's higher per capita income. Match Group said it has made dating products in Asia a priority, appointing a general manager for South Korea and Southeast Asia last year as well as setting up offices in Japan and Indonesia.

OPW - Feb 27 - Live.me has been removed by Google Play store as part of the broader action against Cheetah Mobile, their parent. See Android Police article. This action means people who already have the Live.me app can't pay. That's not good for some in the dating industry. Live.me powers livestreaming video on Twoo for the Match Group. So this is a concern for the dating industry, and for Twoo.

TOM'S GUIDE - Feb 19 - The Date Check-in feature is the latest safety measure for Match Group's dating apps. With the Date Check-In on Match.com, users are able to let people know they're on a date and to send them an SOS if they're feeling unsafe during the date. Tinder added a similar safety feature last month. In the case of Tinder, the safety features tie into a separate Noonlight app that also provides a panic button for alerting people when they feel unsafe.

GDI - Feb 19 - Mark Brooks is one of the online dating industry's leading experts with almost two decades of experience under his belt. He's worked with companies like POF and Social Discovery Ventures in the past, and created his own consultancy business in 2005. Mark joined GDI's Dom Whitlock to talk about some of the biggest ongoing stories, including Match Group's separation from IAC, Facebook Dating and romance fraud. Listen now on Apple Podcasts, Spotify and SoundCloud.

Facebook Says Its Dating Service Is Hot, But It's Probably Not

FORTUNE - Feb 15 - About two and half years after it first debuted, Facebook's dating service has shown limited signs of progress. Instead, indicators suggest the service may be having difficulty challenging major dating rivals and rolling out in certain countries. Facebook Dating, which the company first introduced in Colombia in 2018, debuted in the U.S. in September and is currently available in 20 countries. Facebook Dating recently hit an unexpected roadblock when it tried to expand to Europe. Former CEO of Match Group Mandy Ginsberg, who announced plans to step down last month, says the company hasn't seen Facebook Dating impact any of its brands, which in 2019 collectively attracted ~ 9.8M subscribers. Gary Swidler, Match Group's CFO who recently also took over the role as chief operating officer said: "You can't underestimate them. But the reality is they're in 20 countries, and when you look at our numbers, there's no impact."

IAC CEO: Leadership, Market, Scale Determine if Company Is Worth Investing in

FOX BUSINESS - Feb 15 - IAC CEO Joey Levin provides insight into why people should invest in online dating apps and explains how his company has climbed the economic ranks. Video.

Match Group Reportedly Approaches The Meet Group About a Takeover

THE STREET - Feb 7 - Shares of Match Group jumped yesterday following a report that it had contacted rival The Meet Group about a takeover. It's not certain a deal will be completed, the sources said.

by Dan Weil
See full article at The Street