LINKEDIN - Matchmaker.com is a website to educate singles on the advantages of hiring a Matchmaker as opposed to using Dating apps. By being listed, you get instant visibility to singles who are browsing our website and reading our content. All you have to do is tell us you're interested and register a complimentary account with Global Love Database before May 31st, 2022.

The Global Love Conference happened Thursday 12th May, with over 100 of the top matchmakers from around the world. Matchmaker.com launched at the event as a platform for people to find a matchmaker. 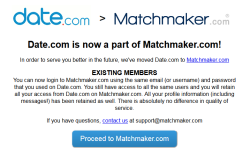 OPW - Dec 12 - Date.com went down, along with other Avalanche Media products Gk2gk and Matchmaker.com a few weeks back now. Date.com now forwards to Matchmaker and Gk2gk is live again. The word on the grapevine is internal strife and a legal suit. Hopefully they can sort it out. Date.com and Matchmaker are hallmark dating sites. The company has suffered for not having a good mobile offering of late. Now Commission Junction is down, according to one of their affiliates. The following letter was sent out.
___

Dear Valued Publisher,
Please be aware that Date.com, one of the advertisers you are joined to in the Commission Junction network, has been deactivated. While Date.com is deactivated, you will not receive commissions for traffic you drive via the advertiser's banners, text links, and/or other link types. Consequently, please replace these links as soon as possible with links from active advertisers. To view the links you are using that are generating traffic for Date.com but from which you are earning no revenue, go to the Invalid Links Generating Traffic Report.

To view all of your affiliated advertisers who have been deactivated from the Commission Junction network, go to the Deactivated Advertisers Report.

If you have further questions regarding the status of Date.com, please contact your Commission Junction account representative or Client Support.

From affiliates perspective, this really sucks! Affiliates put a lot of work into getting SEO rank. The good ones (like the one who sent me the heads up on this) deserve to have more notice and more respect than 'oops, now we're not payin' ya.' I guess it comes with the territory, but still, we can surely do better by affiliates. No wonder they're running for the igaming hills.

Did Date.com Hit The Deadpool?

OPW - Nov 16 - It looks like Avalanche, the parent company of Date.com, Matchmaker.com, Amor.com, Geek2Geek and other dating sites, has gone out of business. All the sites are down. We have reached out to Avalanche's CEO, Meir Strahlberg, and will update as we learn more.

See all posts on Matchmaker.com

Let’s Get Digital: An Oral History Of Online Dating

JON BOEDE, CO-FOUNDER MATCHMAKER: In 1984, my friend and I were running [dating] bulletin boards. The Internet obliterated the bulletin board world. Boede converted the business to a website. Lycos bought for $44.5 million. By 2004 there wasn’t much left of it.

GARY KREMEN, FOUNDER MATCH: I started Match in ’93. I needed to get married. I wrote some software that matched people through email and attached profiles. Kremen partnered with VCs who sold Match.com to Cendant for $7m in 1998. Nine months later, Cendant sold it to IAC for ~$50m.

JONATHAN CRUTCHLEY, FOUNDER MANHUNT.NET: Jonathan was a successful Boston real estate investor. In 1992, he bought half of a popular gay telephone chat line that became Manhunt.net. Phone-line revenues peaked ~year 2000. We organized events at gay bars and advertised in gay newspapers in new York and Philadelphia.

MANDY GINSBERG, PRESIDENT MATCH: I don’t know how to prove it, but there’s been a shift. We started to see a lot more people who felt comfortable putting out personalized things, commenting on things, uploading their own pictures of things.

SAM YAGAN, CO-FOUNDER OKCUPID: We’re helping erode the stigma for the entire industry. I think it helps that we’re free, which makes it all seem less intentional.

MARKUS FRIND, FOUNDER PLENTYOFFISH: The reason for our success is that we actually helped people meet. Our mobile traffic was around 6% in the under-30 category. Now it’s sitting at 70%.

The future of online dating might very well be its own demise, a movement toward a place where the distinction between meeting in the real world and meeting online no longer exists.

by John Ortved
The full article was originally published at Bullet, but is no longer available.

NY POST - Nov 29 - More and more New Yorkers are searching for love on European dating sites. Lillian, a 42-year-old Manhattan copy editor signed up for Meetic.com. She Skypes with a Parisian man from the site for an hour each day. Susan, a 22-year-old grad student, also struggled with dating locally, so she widened her eHarmony parameters. Even “Real Housewives of New York City” reality star Alex McCord and Simon van Kempen met through Matchmaker.com while living on different continents. Mark Brooks, editor of OnlinePersonalsWatch.com, says international romance is a growing trend, due to singles’ increasing pickiness about potential life partners. “The longer the shopping list, the further afield you should cast your net,” he advises. A single New Yorker four years ago, he flew to Prague for a European online dating conference where he met and fell for a Czech woman. They married last April and now live in Malta with two daughters.

Here are some of the most popular dating sites from around the world:
Europeans: Meetic.com
Brits and Canadians: PlentyOfFish.com
Asians: AsiaFriendFinder.com
Australians: RSVP.com.au
Indians: Shaadi.com
Russians: Mamba.ru

NETWORK WORLD -- Feb 13 -- The number one free dating site in the U.S., U.K. and Canada is Plentyoffish.com, run by CEO Markus Frind. Since its 2003 launch, the site has grown by word of mouth to more than 13m page views a day. "Singles tend to join the site around family-related holidays-anytime they're reminded of being single", Frind says. "Reading happy stories from users who've met someone great POF is part of the reward," he says. Jon Freeman, who met his future wife on Matchmaker.com, said "I was a two time 'loser' having used less than intelligent methods to find the 'right person' and figured I needed a better process. The Web gave me just that ability.

The full article was originally published at Network World, but is no longer available.

PR NEWSWIRE -- Feb 12 -- Date.com, Matchmaker.com and Amor.com have launched Virtual Gifts to its community. Beginning this week, singles can show interest by purchasing online gifts for $1. From a business perspective, this feature will serve as another revenue stream for the company; according to leading analysts, virtual gifts is an estimated $1.5 billion industry.

GLOBE & MAIL -- Jan 29 -- Lavalife, PlentyofFish, Match and PerfectMatch have seen their memberships soar after the stock-market plunge. Lavalife registrations are up 11% from last month, PlentyofFish enjoyed 77% growth in visits from Dec '07 through Dec '08. "Unlike the real world, dating sites offer the lovelorn a "completely refined, focused community", says Mark Brooks. Dating sites take care of the formalities. "If somebody wants to wander around and meet somebody, that's not a good idea on two counts: No. 1, it'll take them a long while and No. 2, they've got to get all the difficult questions out of the way." A survey by Florida-based Avalanche LLC - which operates international sites date.com, matchmaker.com and amor.com - found that 48 per cent of respondents were spending more time online or on the phone with a potential date before spending cash on a face-to-face meeting. Joe Tracy, publisher of Online Dating Magazine, agrees that bad economic times force people to "reprioritize their goals in life." Paul A. Falzone, CEO of LoveAccess.com agrees. "People, when they're confronted with any type of dilemma in their lives, tend to want to migrate back to what's comfortable to them. They go back to eating their comfort foods, they crank up the heat by the fire instead of going out all night, and they want someone to be able to share things with." FULL ARTICLE @ GLOBE & MAIL

PR NEWSWIRE -- Dec 16 -- "According to statistics from a Pew Internet & American Life Project, 38% of Americans in marriages or long term relationships reportedly met at work or school. Avalanche, owner of leading online dating sites Date.com, Matchmaker.com and Amor.com asked their members whom would you end up hooking up with at the office holiday party.

Following are the complete results:

MEDIA LIFE MAGAZINE -- Dec 1 - A number of online dating services are reporting that their subscriber numbers have soared since September's stock market turmoil hit. Christian Connection, a London-based online dating service, reports that its revenues in last three months were up about 40% YOY. Perfectmatch.com also said in November that the number of members is up 47% compared to last quarter. And Avalanche.com, which owns Date.com, Matchmaker.com and Amor.com, reports a similar trend, with revenue up 17% YOY and membership up 26%.

The full article was originally published at Media Life Magazine, but is no longer available.

PR NEWSWIRE -- Nov 20 -- Avalanche, owner of Date.com, Matchmaker.com and Amor.com, started its international expansion with the launch of translated sites in Spanish, Portuguese and German. Avalanche also added PayPal as a payment option for site subscribers.

The full article was originally published at Cloud Computing Journal, but is no longer available.

The full article was originally published at UK SYS, but is no longer available.