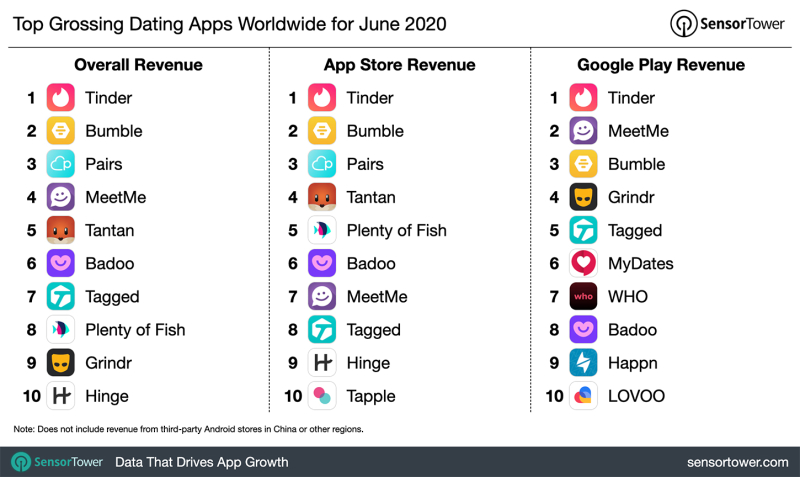 The Meet Group Launches DateNight to MeetMe and Skout

BUSINESS WIRE - July 28 - The Meet Group, a leading provider of interactive dating solutions, is launching DateNight interactive feature, which makes anyone the star of their own dating game. DateNight is a livestreaming dating game that offers rewards to anyone who plays. Daters who match during a DateNight event will receive a free $10 gift card to one of 18 different national chain restaurants, giving away up to $15K worth of first dates every day. DateNight events will occur on Thursdays from 9:00 - 11:00 p.m. EDT throughout July and August.

SENSORTOWER - July 3 - The top grossing dating app worldwide for May 2020 was Tinder with ~$65.3M in user spending. ~41.5% of Tinder's revenue was from the U.S, followed by 5.6% from UK and 5.4% from Japan. Bumble was the second highest earning dating app worldwide for May 2020 with close to $16M in gross revenue. The next top grossing app was Pairs, followed by MeetMe and Tantan. 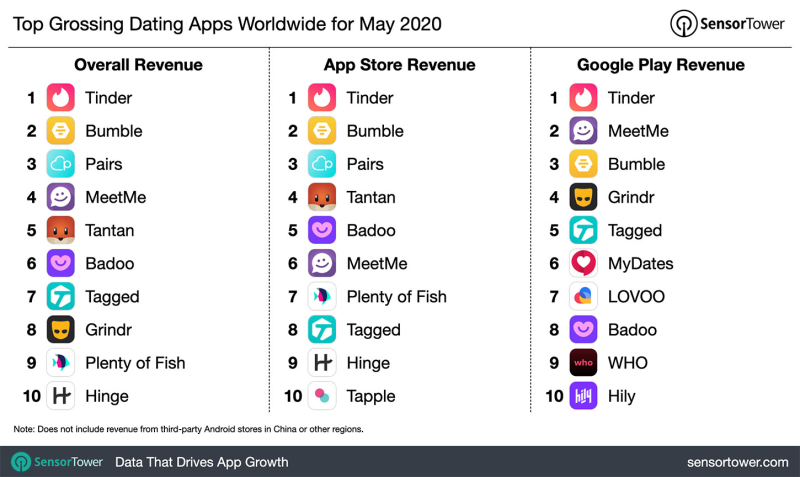 INVESTORPLACE - June 30 - Blind dating gets a modern upgrade, making MEET stock a potential winner even amid the pandemic. The Meet Group has recently announced the rollout of an interactive game known as Blind Date. This will be an addition to The Meet Group's popular NextDate game, which "is like speed dating, except that there's an audience and the contestant gets to choose the specific people they'd like to connect with," according to CEO Geoff Cook. The Blind Date game will be integrated into The Meet Group's MeetMe, Skout, and Tagged. It will also be integrated into Match Group's Plenty of Fish. Blind Date should serve to increase user engagement. MEET stock could easily reclaim its former high point as the company's innovative spirit could bring people back into the dating game again.

PRESS RELEASE - June 23 - The Meet Group, a leading provider of interactive dating solutions, has released Blind Date, a new interactive game rolled out to The Meet Group's MeetMe, Skout, and Tagged mobile apps, as well as Match Group's Plenty of Fish. The new feature will allow users to meet and date through a timed video chat that is based on personality rather than appearance. "A recent survey of MeetMe users found that 91% of members wish that dating was more focused on personality, and 77% would chat with someone before seeing what they looked like," said Geoff Cook, CEO of The Meet Group. "We are seeing that our members value personality over attractiveness, and with Blind Date, they are given the opportunity to chat first and gain a sense of who they are connecting with."

FORBES - May 11 - The Meet Group provides interactive live video solutions for its apps - MeetMe, LOVOO, Skout, Tagged and Growlr, and also Match Group's Plenty of Fish. Across that spectrum, The Meet Group works to ensure safety and security for its social media connections. Recently, the live meet-up sections of MeetMe, Skout and Plenty of Fish introduced NextDate speed dating sessions with built-in The Meet Group Technology. Running now through May 30, those sites will host Speed Dating Social Hours at 10PM and 11PM ET, every Thursday and Saturday. The Meet Group will reward those who find their match on NextDate. The first 25 couples to match will receive 8K ($50) credits redeemable on the MeetMe, Skout, and Plenty of Fish dating apps to buy and send gifts to members who are live-streaming on the apps or playing NextDate on any of the social media platforms.

The Sudden Rise of Virtual, Video Based Dating

QUARTZ - May 10 - Covid-19 has forced a pivot to video for many online singles. A shift (towards video) within the (dating) industry has accelerated. Bumble launched in-app video chat in 2019 and said its use increased 56% worldwide over the last two weeks of March.

Online dating consultant Mark Brooks envisions a landslide industry shift to video, similar to Tinder's expansion to smartphones in 2013. His first client, Webdate, attempted this in 2005. The same year, what eventually became YouTube initially flailed as a video dating website. "It's been a long time coming, but I think in a couple of years it will be unusual not to be able to do a first date on a dating app," he said.

Virtual first dates address problems that plague online dating. According to Pew Research (2019) 45% of those polled (in US) said dating apps left them feeling frustrated, and ~50% consider the platforms to be unsafe. In that sense, virtual dates can serve as both a quick authentication and vibe check.

Mark Brooks: The video above is a 2 minute segment from a 7+minute news feature on dating. Through interviewing with Quartz I discovered the wonderful QZ.com news platform. Very impressed, and hooked. I recommend signing up so you can see this full video feature. I'm also subscribed to WSJ and The Economist, and find QZ to be a nice complement to these more formal and traditional news outlets.

The Top Dating Industry News for May 4th

BUSINESS WIRE - Apr 29 - The Meet Group, a leading provider of interactive livestreaming solutions, plans to release two new features to its NextDate dating game, Blind Date and Second Date, on its MeetMe and Skout livestreaming dating apps in the coming weeks. The Meet Group hopes to encourage its users to make connections, find love, and regain a sense of community, all while remaining socially distant. NextDate, a gamified version of speed dating, was introduced to The Meet Group's portfolio of mobile apps in October 2019. Blind Date allows NextDate users to meet and date streamers through a timed video chat. Second Date gives a contestant the chance to have a number of subsequent dates with the streamer during the game, adding a new element to the NextDate experience.

MEDIUM - Apr 24 - Since the start of the pandemic, thousands of musicians and artists have lost their gigs and are unable to perform in-person concerts. Many of these performers were left high and dry, feeling hopeless, with nothing but uncertainty on what lies ahead. MeetMe Live hopes to relieve some of this burden by hosting MeetMeLive Aid - a four-week long fundraiser dedicated to helping talent impacted by stay at home orders across the country. Beginning April 23 and lasting through May 14, MeetMe Live will welcome new and emerging talented musical artists to its virtual stage in order to raise money for charities making a difference in the lives most impacted by the novel coronavirus.

MeetMe to Improve Its Screening for Sex Offenders

WASHINGTON POST - Dec 13 - MeetMe says it checks users to ensure they aren't convicted sex offenders by comparing the names they provide to MeetMe with online databases that list registered sex offenders. But the company has been the subject of lawsuits for allegedly enabling sexual predators to target minors. The Meet Group spokeswoman Brandyn Bissinger said they used different last names in their profile, and that is why they didn't show up in sex offender registries. "Our number one priority is providing a safe environment for our ~15M monthly users to connect and interact," Bissinger said. "We are an industry leader in promoting safety standards and are continuously working to advance our efforts." MeetMe said it will go beyond a person's username to check for sexual offenses. For instance, it will now check names on banking records when it pays streamers and check whether the names in email addresses conflict with the names users provide the company when accounts are created.

BUSINESSWIRE - Dec 9 - IDEA (The Internet Dating Excellence Association) is launching the Social Safety Badge and Guidelines for high quality dating apps. "The goal of this badge is to help users identify dating, matchmaking and social apps that are distinguished in their commitment to a safe and exceptional experience for users," said IDEA President Mark Brooks.

The following dating apps are in the initial launch group and have signed on to the badge, stating that they will adhere to the guidelines:

BUSINESSWIRE - Nov 22 - Users of MeetMe, Skout and Tagged can purchase a custom food donation gift to help make the season a little brighter for those who need it the most. The Meet Group plans to make a donation for every East Trenton Center Food Bank gift sent in the apps up to an aggregate of $10K to the East Trenton Center Food Bank. The limited edition gift will be available from November 22nd through November 29th.

The Meet Group Releases "Viewer Levels" on MeetMe and Skout

PRESS RELEASE - Nov 19 - The Meet Group, a leading provider of interactive livestreaming solutions, has released a new "Viewer Levels" feature for viewers of its livestreaming product on MeetMe and Skout mobile apps. With the new product, livestreaming viewers will earn experience points, or XP, by spending time engaging with broadcasters and purchasing virtual gifts for them. On reaching certain XP thresholds, viewers will level-up through the ranks, from Rookie to Legend, while unlocking exclusive gifts.