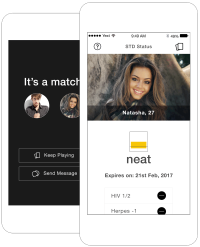 FORBES - May 19 - NeatClub, the dating app with STD verification, boasts a small number of users who're working to certify their test results in the app's online portal. The app is billed to suit people "who love sex but like to have it safely," but sexual health experts say the benefits and risks of STI testing aren't so cut and dry. Not all STI tests are created equally. "A herpes test is not valid until three months after last exposure, so someone who is changing partners more frequently than that could have a negative test but still have an infection that's brewing," said Dr. Hunter Handsfield, Professor Emeritus at the University of Washington's Center for AIDS and STD. "This app won't help very much," he added. NeatClub has been available to iOS users since March 31, and it is unknown whether any users have already been able to clear its testing hurdles and start mingling.