The full article was originally published at BusinessWire, but is no longer available. 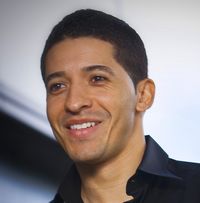 OPW INTERVIEW - Apr 26 - I first met Mo when I was working at FriendFinder in 2003. He’s done very well with OnlineBootyCall and has turned some of his attention towards developing an interesting new site called HerWay.com. I interviewed Mo back in August 2007. (Full Disclosure: Mo is a client of Courtland Brooks)

What did you do before you started OnlineBootyCall?
I was a software engineer. I worked as a database administrator and one of my side projects was an online dating site. That is how OnlineBootyCall started.

Why did you choose OnlineBootyCall? What other names did you consider?
There was really no name consideration. I just registered the domain so I could use it to do some web development and I had no idea the site was going to take off. I was the first member and now we’re close to 5 million members now.

Congratulations. You’re working on a new site, HerWay.com. How does this site work and how is it different from other dating sites?
HerWay, as the name implies, works a little differently. We set it up so it works similar to the Sadie Hawkins dance, a high school dance in which female students invite male students to dance. So on HerWay we allow the females to make the first move.

Isn’t this a distinctly American concept?
I would say 95% of the people I’ve asked heard of the concept. The dance idea started in the US but I’m not sure how many people internationally know about it.

It sounds like you’re empowering women but do women really want to be empowered in this particular respect or do the guys really want to lead?
I wouldn’t necessarily call it empowering women. It is more about saving them from being inundated with emails from guys who they aren’t interested in. So giving them the opportunity to search for someone they really want versus fielding messages and responding to winks and stuff or responding to guys telling them they’re not interested, is a lot more efficient. One of the things we’ve noticed is women are often inundated and guys are often ignored on dating sites.

So it sounds like you’re trying to readdress the boundaries with HerWay.com?
Yeah I think so. I’ve talked to a lot of women who have joined the site and they appreciate it. It’s like a breath of fresh air. It’s not for everybody, of course. Some women like to be chased and they like the traditional dating experience.

What inspired you to start HerWay.com?
While operating OBC, I started noticing that whenever a female would reach out to a guy, the response rate was sometimes up to 10 times better than the other way around. So it led me to believe that it’s really up to the female to decide who she’s going to meet regardless of who initiates the contact.

How is the site growing? How are you getting the word out?
Right now it’s mostly word of mouth. We’re growing at nearly 1000 members a day with little to no marketing efforts, which is going to change pretty soon.

Do you have any other projects in the pipeline?
We do but it is a little too early to discuss right now. There are a couple of projects we’re excited about to get started. So when that comes up we’ll definitely let you know about that.

PRESS RELEASE - Mar 18 -
5) Blue Ball vs. Climax, - the city of Blue Ball is located in the Amish region of Pennsylvania, where the ladies prefer bonnets to bikinis and a fiddle over an iPod. Climax is situated far off on the opposite side of the state where your chances of getting there are... about zero.
4) Yakutsk, Russia - with a record low of -67 degrees Fahrenheit in March, going outside in board shorts will result in more than one blue appendage to complain about.
3) Kabul, Afghanistan - Unless your idea of fun is playing hopscotch across an IED-riddled mine field, you'd do well to get your adrenaline rush elsewhere.
2) San Quentin State Prison - That sauna you're wandering into is actually a gas chamber, and as a bonus, you're sharing a hotel bed with the ghost of Charles Manson.
1) Haiti - Haiti got all the Spring Break necessities: gorgeous weather, pristinely desolate beaches, and a complete lack of infrastructure. We love our Haitian compatriots and because the crisis is far from over, we remind everyone to donate $10 to the victims of the Haiti earthquake by texting HAITI to 90999.
FULL ARTICLE @ OBC

LA TIMES - Feb 14 - Piper Jaffray Investment Research predicted U.S. spending on online dating would reach $1.7 billion annually by 2013, and $1.2 billion was spent in 2008. The Internet is essentially the world's largest bar, explains Mark Brooks, editor of OnlinePersonalsWatch. The first step is figuring out which nightspot is for you: There are those with no cover charges, PlentyofFish and OKCupid, and hookup spots Fling.com and OnlineBootyCall.com. There are "theme nights" geared toward particular interests, such as BikerPlanet.com, and "neighborhood watering holes" based on religion or culture, such as JDate or AsiaFriendFinder. There's comfort in name recognition from eHarmony and Match. Or get a yenta through eLove.com.

"One of our more popular sites as of late is DateaCougar.com," says Stephen Ventura, VP of First Beat Media, which owns GothScene.com, BikerPlanet.com, FitnessDates.com and others.  Want a dash of romance with your social networking? Brooks says to look to Zoosk. It syncs with a users' Facebook's profile page. Spark's Kizmeet is attempting something similar. Still, Brooks says it's unlikely that social networking sites will kill the online dating market. "If people are anonymous, people tend to be more aggressive and more outspoken," he says. "On an Internet dating site, if you want to cut somebody off, you can easily. When you're on a social network, you have to be [polite] because their friends are watching."

This is the news for the week of October 30th through November 5th, 2009. We hope you enjoy the new weekly news format. Here is the news we covered for this week:

OnlineBootyCall Celebrates A Major Milestone With A $1 Million Sweepstakes

PR WEB – Nov 5 – OnlineBootyCall.com has reached 4 million members and will celebrate by giving away $1 million to one of them. An additional prize of $5000, and five $1000 prizes are up for grabs. OBC's last million dollar sweepstakes culminated in a world class celebration in Los Angeles, CA. This year's party will surely surpass it. FULL ARTICLE @ PR WEB

Sex With A Stranger

GLAMOUR MAGAZINE -- Aug 26 -- A startling number of young women are living out a fantasy with guys they meet online – and don’t know at all. Liberating or just plain dangerous? Hookup or “casual dating” websites like Fling.com, SexSearch, OnlineBootyCall, and others often outperform mainstream dating sites. Match.com had 5M unique visitors in May. AdultFriendFinder had nearly 24M and Fling 18M. Statistics show that ~50% of these users are women. “Most women say they get a rush from sleeping with a stranger. The rush may be largely fear. If you mix the chemicals involved with fear (adrenaline and norepinephrine) and those involved with sexual arousal (serotonin and dopamine), you create the most potent cocktail the brain can handle”, said Kelly McDaniel, author of Ready to Heal: Women Facing Love, Sex and Relationship Addiction. SUMMARY FROM SEPTEMBER 2009 GLAMOUR MAGAZINE

OBC Searches For A New Face For Casual Dating

PR NEWSWIRE -- July 9 --  OnlineBootyCall has announced its contest: the search for the New Face of OBC. The contest will run from July 1 until October 31. Contestants must submit up to 5 pictures and answer 3 brief questions by July 31st in order to enter the competition. The winner will receive a $50,000 modeling contract and will participate in OBC promotions and events around the country.

BUSINESS WIRE -- Feb 24 -- From January 1st through Valentine’s Day weekend, OnlineBootyCall has experienced a 38% YOY growth. Since the site launched in 2003, more than 75m bootycall connections have been made. FULL ARTICLE @ ONLINE BOOTY CALL

BUSINESS WIRE -- Feb 10 -- Singles can now send their friends a clever "Will you be my booty call" e-card via OnlineBootyCall.com to celebrate the holiday that used to make them gag. FULL ARTICLE @ BUSINESS WIRE

Mark Brooks: OBC is up to their mischief again. Destroying the image of Cupid. Bludgeoning our favorite celebration day of the year! Your comments please.

PR NEWSWIRE -- Nov 18 -- OnlineBootyCall.com has announced the winners of its Smart Car Giveaway Contest. The contest ran from August 1 to October 31 and asked members to invite friends to join the OBC community. Thousands of singles were invited to join, and prizes totaling  $40,000, including a Smart Car cabriolet, were awarded to the 13 winners this week.

OnlineBootyCall.com Is The Most Popular Dating Site In Iraq

PR NEWSWIRE -- Aug 4 -- OnlineBootyCall.com, a dating site for casual daters is hosting a contest to give away a 2008 Smart Car Cabriolet, valued at $25,000.  In total, the contest will have 15 winners and $40,000 in cash and prizes. The contest runs until October 31, 2008. As the Smart Car is famous for its tiny size, there is no word yet if someone has figured out how to have an online booty call in a Smart Car.

The full article was originally published at IT News Online, but is no longer available.

Top 10 Signs He's Not Into You

PR WEB -- July 17 -- OnlineBootyCall.com (OBC), the casual dating website, announced some new tips for singles in the world of online dating. "Men get a bad rap for leading women on when we're really just not that into them," but according to Moses Brown, Founder of Online Booty Call, "women play a part in it too. If the ladies read the obvious signals we give them, they'd understand that most of the time it's nothing personal. I'm just not that into you."

Here are the Top 10 indicators that your date is just not that into you:

10. He tells you he's just not that into you
9.   He tells you he isn't ready to settle down into a relationship
8.   Doesn't give you a hug or a kiss goodbye
7.   He doesn't call and makes poor excuses
6.   He suggests you date one of his friends
5.   Shows up with his wife or girlfriend to the party you invited him to
4.   You find him at the club showing off his moves to some other girl on the dance floor
3.   He doesn't want to come upstairs and says he has an early meeting
2.   He doesn't know your last name
1.   He doesn't call to thank you after taking him to a Lakers playoff game

PR WEB -- June 23 -- Moses Brown, founder and CEO of OnlineBootyCall.com (OBC), the casual dating website, announced his Top 10 Do's and Don'ts of online dating:
10. DO keep it simple and casual on the first date.
9. DON'T act too interested
8. DO compliment her on her appearance
7. DON'T hesitate to ask her out
6. DO act confident
5. DON'T be cocky
4. DO offer to pay for the date, guys
3. DO use protection
2. DON'T look for dates that are out of your league
1. DO play the game
FULL ARTICLE @ PR WEB