Pure, the Dating App 'Where Anything Goes'

NEW YORK POST - Pure started up in Portugal and has spread throughout Europe. Launched in 2013, the app has only just started marketing the app in the US as a site for "shameless dating," an online ad board where users can explicitly say what they're looking for right now. The brainchild of Ukrainian entrepreneurs Roman Sidorenko and Alexander Kukhtenko, the app currently boasts a half-million active, international users, mostly in cities like London, Paris, Berlin and Moscow. In the New York City area, Pure has 20K prospective daters. In April 2020, Olga Petrunina, who previously founded several IT companies in the travel and crypto industries, became the CEO of Pure. According to the company, "As a woman, Olga's main goal is to improve the female experience with online dating." The site is mostly a go-to for heterosexuals searching for casual sex.

See the top news on Pure

NEW YORK POST - Apple and Google are about to face their first major test under a law targeting their app-store fees - and the result could be a battle in South Korea with Match Group. Match Group is angling to capitalize on a recently passed South Korean law that targets Apple and Google's fees, which can amount to ~30% of an app's revenue. The stakes are high for Match, which expects to fork ~$500M in such fees globally this year alone, representing ~20% of the company's global revenue. Match bought Seoul-based dating app Hyperconnect in June for $1.73B. Now, Match plans to submit updates to its apps before the end of October allowing South Korean customers to sidestep Apple and Google's payments systems. Match CFO Gary Swidler said the company was considering offering alternative payments systems to California customers at some point in the future.

NY POST - June 2 - Six people have been busted for their alleged role in an elaborate, multi-million-dollar dating site scam - after they helped launder $3.5M fleeced from vulnerable, lovesick targets online. The crew allegedly put the money, swindled from users of dating sites, into shell accounts - including $1M from a single victim.

NY POST - May 5 - As the brand suggests, Dominion Dating caters to religious singles who seek to fulfill marriage traditions as defined by the Old Testament. Part of the membership agreement entails a pledge to commit to "male headship" of the family, church and government, "believing that God has endowed men with real, limited authority to govern well for the good of mankind," its website reads, as well as a vow for women to assume their "dominion in the home as homemaker and helpmate, in glad submission to a husband." Currently, the site is urging visitors to "back this project" with donations of $15 to $500, offering various membership packages.

NEW YORK POST - Mar 12 - Coffee Meets Bagel is adding a person's COVID-19 vaccine status to their profiles. This new feature comes as some 19% of the US population has received at least one dose. On Monday, the Centers for Disease Control and Prevention released new guidelines for those who have been fully vaccinated. People who have been vaccinated can gather indoors - and without masks - with others who have done the same.

Single Seniors Excited for Vaccine so They Can Date Again

NEW YORK POST - Jan 11 - Helen Fisher, Ph.D., an anthropologist who conducts scientific surveys for Match.com, predicts that "seniors will be out in droves. They have been more cautious over the past year than their younger counterparts, but as soon as they're vaccinated they'll be out." According to Fisher, video chatting will remain commonplace as an important "vetting stage" before in-person dating. But, she added, "The brain is built to meet somebody in person. It's much more intense." Like everyone else, older singles are looking for "romantic love," she said.

Study: There's No Such Thing as 'Not My Type' in Dating

NY POST - July 7 - People who believe they have a "type" are fooling themselves, according to social psychology researchers who say that singles "might as well let a stranger pick their dates." This is because most people are looking for more general positive qualities in a love interest, such as "kind" and "intelligent" personalities, the researchers from University of California, Davis, write.

NY POST - May 2 - 42% of Americans in relationships have downloaded a dating app since the start of COVID-19, according to a new study of 1K people in relationships not quarantining with their partner. A third of those in a relationship have reached out to an ex. The survey was conducted by OnePoll on behalf of LELO, a company that sells sex toys. 67% admitted social distancing has even increased their cravings for physical intimacy.

Dating App Once Tells Users How Hot They Are

NY POST - June 20 - Dating app Once wants its users to know precisely how dateable they are. It uses a new transparent and perhaps harsh algorithm-driven system. "Ranking algorithms" are the unspoken secrets of the dating industry," said Once CEO Jean Meyer. "We know we're doing it, we know our competition is doing it, so why not be transparent?" Meyer says knowing one's rank in the dating world can help users target more realistic matches. To understand its ranking algorithm, it helps to picture a game: If a poor player suddenly beats a skilled one, their rating rises. So if someone with a low rating suddenly matches with a total hottie, they inch closer to a 5. 4s and 5s have a lot of power, he adds: "The higher you rank, the more weight your likes have." OkCupid denied ranking users, and Bumble would not speak of its algorithm.

Match.com Leaves The Visually Impaired In The Dark: Suit

NY POST - Oct 1 - Match.com is blind to the needs of the visually impaired lovelorn, says a Virginia man in a Manhattan federal lawsuit. Blind users can't even create a profile for themselves. The company is looking into the matter, a Match.com spokeswoman said.

PAGE SIX - July 10 - Tinder plans to hold "exclusive" parties for celebrities, models and masters of the universe. Michael Hirtenstein rented his oceanfront compound at 230-234 Old Montauk Highway to a Tinder exec for the month of July for $135k. Tinder is now looking for last-minute sponsors for their fancy singleton parties. 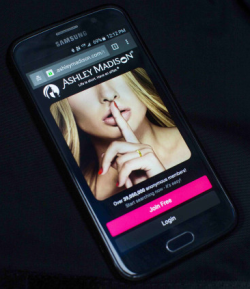 NY POST - May 19 - Ashley Madison claims it has now signed up ~52.7M users since its founding 15 years ago. That's up ~50% from the 36M it claimed a little less than two years ago at the time of the cyberattack. The company also claims that the average monthly sign-up rate since the hack has been north of 750k, a huge number by the standards of most any dating app these days. Ashley Madison is making loud claims about a 1-to-1 ratio of signups by women and men in New York City. That ratio falls off a bit, to 1.4 men for every woman signing up across the rest of the country.

EliteSingles To Pump Up TV Advertising

NY POST - Dec 11 - EliteSingles is currently the third-largest US TV dating advertiser behind Match and eHarmony, but plans to turn up the volume to ensure it nabs between 5k - 6k new customers a day. The company is currently signing 3k - 4k, it says. The company is backed by Rocket Internet and Holtzbrinck Ventures, and the US is its fastest-growing market.

See all posts on EliteSingles

3nder Forced To Change It's Name To Feeld

NYPOST - Aug 2 - 3nder, the kinky app catering to threesomes, will change its name amid a trademark dispute. Dogged by a lawsuit from a Tinder filed this spring, British-based 3nder will change its name to "Feeld." Feeld has seen downloads grow 65% year-to-date compared with last year, to reach a total of 1.57M.

Happn Keeps Growing In US

NYPOST - Mar 1 - The French-based mobile app boasts 13M registered users, up from 10M two months ago. CEO Didier Rappaport said he expects the momentum to continue this year. Rappaport is in New York this week visiting top venture funds about a Series C investing round expected to close in July. So far, Happn has raised $22M. New York City is now Happn's largest US market.