Online Dating Behind Surge in Over-65s Getting Remarried

TELEGRAPH.CO.UK - Aug 10 - The average age of women who tied the knot in England and Wales in 2008 was 33.8 and 36.5 for men, which rose to 35.8 and 38.1 in 2018, according to the latest data from the Office for National Statistics (ONS). This is partly due to the surge of so-called "silver splitters", those who divorce then remarry in later life. The number of brides and grooms aged 65 and over has increased more than any other age bracket in the past decade. Between 2004 and 2014, there was a rise of 46% from 7,468 to 10,937. The numbers have been steadily rising from 2009 onwards. Access to dating websites and financial independence are among the reasons suggested for this surge in later life marriage. Fewer young people getting married, the overall number of marriages in England and Wales is currently at its lowest level since 2009.

Chinese Spend $30B on Singles' Day

TELEGRAPH.CO.UK - Nov 12 - Alibaba said sales for its annual Singles' Day shopping blitz have exceeded $30B, putting the event on track to set a record in its 11th year. The figure is equivalent to ~80% of Amazon's sales in its most recent quarter. Singles day or Guanggun Jie (Nov 11) is a shopping holiday popular among young Chinese people that celebrate their pride in being single. Alibaba turned China's informal Singles' Day into a shopping event a decade ago and built it into the world's biggest online sales fest.

Bumble Founder Gets £4M Dividend Ahead of Potential Float

TELEGRAPH.CO.UK - Oct 6 - Bumble CEO & founder Whitney Wolfe Herd enjoyed a £4M dividend ahead of a possible float for the firm's parent company. Badoo is the UK-headquartered majority owner of Bumble, which also controls gay dating app Chappy and over 50s app Lumen. Wolfe Herd owns ~20% of Bumble. According to UK accounts for Badoo, Bumble now makes up 48% of the business, making it the crown jewel in Mr Andreev's dating empire. Andreev snapped up a 79%c stake in Bumble and has bankrolled founder Ms Wolfe Herd, creating a rival to Tinder. Badoo has been rumoured to be preparing for a US listing itself, with its Bumble asset valued on its own at north of $1B.

TELEGRAPH.CO.UK - June 22 - One critical new criteria for finding the perfect partner was recently added to Japan’s fast-paced dating world, with the launch of a new service that promises to find love based on DNA compatibility. Created by the dating company Nozze., which operates 21 branches across Japan, DNA Matching works with scientists at a Tokyo laboratory in order to decode the science of attraction and find the perfect match for its clients. Earlier this week, new government figures revealed that almost half of Japanese singles who wished to marry were unable to find a suitable partner, with 60% admitting they were not doing anything to change the situation. Satoru Fujimura, PR manager of Nozze., said: "We believe 50% of a person's attraction to another person is due to DNA. And the other 50% is environment. We believe that people with the most different types of DNA (HLA) make the best couples."

CEO of Hinge: I Had Heartbreak So I Built My Own Dating App

TELEGRAPH.CO.UK - Apr 23 - Earlier this month, Hinge revealed a redesign, with a more 'sophisticated' look, to encourage less swiping and more meaningful communication. The technology behind most dating apps is, says CEO & Founder, Justin McLeod, "literally designed to be addictive". "They're hacking your biology and your neurochemistry to keep you coming back. The parallels to addiction are really striking." In his twenties, he battled drug and alcohol addictions, which saw him in and out of rehab. He now considers himself adept at spotting addictive tendencies. "The drug of choice is now social media, which is free and just as destructive. Hinge is designed to be deleted, and everyone else is designed to be addictive," he adds.

TELEGRAPH.CO.UK - Mar 6 - Dating apps such as Tinder are fueling a rise in unplanned pregnancies among women in their 30s, a health minister has said. Jackie Doyle-Price told a conference that technology-enabled modern dating means women start "playing the field again" far sooner after a relationship ends, meaning they manage contraception less effectively. The minister said this partly explained the fact that the growth in unplanned pregnancies is no longer among teenagers, but women in their 30s. Government figures show there were 7,929 legal abortions for under 18s in 2017, and 59,956 among women aged 30 to 39. The data indicates a rapid decline in teenage abortions over the last 10 years.

TELEGRAPH.CO.UK - Mar 4 - Dating apps are partly responsible for a significant decrease in 24-hour alcohol licences, new research has suggested. The number of pubs, bars and nightclubs granted permission to serve alcohol round-the-clock has fallen by a fifth over the past year, according to commercial law firm EMW. (From 919 in 2013 to 742 in 2018). The increasing popularity of Netflix and dating apps has contributed to a "cultural" shift in how people socialise, thereby affecting demand of drinking in late night venues, the research suggests.

TELEGRAPH.CO.UK - Nov 7 - Badoo, part of the matchmaking empire controlled by Russian tycoon Andrey Andreev, is under investigation for its tax payments for the years 2013 to 2016. The news comes as Mr Andreev, 44, whose fortune has been estimated at over £1B, talks up plans to take the company public in a New York listing which could value it at several billion dollars. Badoo is structured with more than a dozen subsidiaries as well as other investments. Its parent company is listed as World Vision, a company incorporated in Bermuda, which in turn is controlled by Rimburg International, a company domiciled in the British Virgin Islands. A separate entity, Badoo Limited, also said it was under investigation. The company reported turnover of £144M for the year ending December 2017, up from £107M in the previous 12 months, for a reported loss of £5.6M. Badoo said the loss was "primarily due to the marketing focus of the business".

Dating App Divorces Are On The Rise

THE TELEGRAPH - Oct 30 - According to a recent study of European and American online dating users by Erasmus University in the Netherlands, 25% of users on Tinder come with many, sometimes hidden, strings attached. Figures for the U.K. are unclear, but Elisabeth Timmermans, the lead researcher, says data from the U.S. suggests that over half of users there are already in a relationship. The Erasmus study found that "non-single" Tinder users "report a higher number of romantic relationships, French kisses, one-night stands, and casual sexual relationships with other Tinder users compared to single Tinder users". Narcissism and Machiavellianism were positively associated with using Tinder for an ego-boost.

THE TELEGRAPH - Sep 7 - Dating apps can be harmful for mental health because they contribute to "smartphone addiction," according to Whitney Wolfe, the founder of Bumble. Ms Wolfe said Bumble will now add a new "Snooze" function, which freezes the app for a certain time.

TELEGRAPH.CO.UK - Aug 16 - Seventy Thirty Ltd, a premium dating agency, has been ordered to refund a client ~£13K after it failed to find the woman the "man of my dreams". Tereza Burki, 47, paid Seventy Thirty Ltd £12,600 after she was assured they only dealt in "creme de la creme" matches, the High Court heard. But Judge Richard Parkes QC today ordered the agency to repay her fee, ruling that she had been "deceived" by Seventy Thirty's then managing director. It was found that whilst the agency boasted of ~7k members, only ~100 of them were men actively looking for love.

See all posts on Seventy Thirty

Why Dating Giants Are Betting On AI

TELEGRAPH.CO.UK - "I don't think dating services should be able to tell you that you have a 95% chance of falling in love with someone," says Xavier de Baillenx, tech chief at Match. "The human brain is very complex. We are just helping users find their 'plus-one' in a less painful way." Dating expert Kate Taylor is similarly apprehensive. "I think the most important thing that technology can do is get you on a real-life date in front of a person," she says. Yet Match is investing heavily in the technology to stand out from the crowd. Match.com has created a virtual assistant that converses with users through a smart speaker. "Lara" can offer dating tips and locations to meet dates. She can even suggest when it is appropriate to have sex. Last week, Happn introduced a new feature: an AI-fuelled interactive map that shows people that visited the same venue in the past seven days. It has big plans to use the increasing amount of data people generate. Facebook can also offer what each dating app on the market can combined. It has one of the most advanced facial recognition tools, not to mention a huge pool of behavioural data.

TELEGRAPH.CO.UK - Apr 30 - "After the events of 2015, we had to rethink who we were", says Ashley Madison chief Ruben Buell. "It included a realisation that "most of our clients are attached and want discretionary tools to date on the side, so that's what we've focused on". The breach barely made a dent. "We are now signing up 20K Britons a day and revenue growth in the US this year went up 17% and Canada 18%", Buell adds. The Canadian, who wears a ring on his finger, took up the role as president of Ruby Life in 2017 after serving as CTO, and now runs its three dating sites: Ashley Madison, Cougar Life and Established Men. 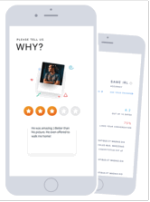 TELEGRAPH.CO.UK - Feb 2 - Once dating app is asking women to write Tripadvisor-style dating reviews, including a five-star rating, that will be published for prospective matches to view. Once, which launched in 2016, has launched a promotional campaign to advertise the new feature, which also allows women to rate how a conversation is going with a thumbs up or down symbol.