ABS CBN NEWS - Sep 29 - Valenice Balace quit her job in a telecommunications company to build a dating app for conservative Filipinas. Peekawoo allows users to strike up conversations within the app on a variety of topics, unlike Tinder, which matches users based solely on whether or not they like each other. The company has earned $100K and grew its workforce to 50 from 4 in 5 years, Balace said.

TECHWIRE ASIA - Apr 18 - Asia is obsessed with finding love. The pressure to find a life partner and lock together is intense. "Leftovers" are women or men 25+ who are not in a long-term relationship. A research suggested the Chinese online dating market would generate CNY10B ($1.6B) at the end of 2016. Down in Southeast Asia, various dating apps have cropped up over the years -Tinder and Happn have established presence in the region, but local competition has been heating up. Paktor and LunchClick are homegrown Singaporean offerings while the Philippines makes an entrance with Peek-a-woo and Indonesia with a "halal app" called Mat & Minah.

by Samantha Cheh
See full article at Tech in Asia 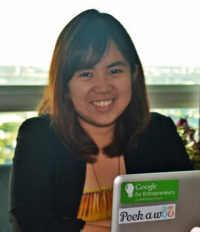 BUSINESS MIRROR - Mar 14 - Balace founded dating web site Peekawoo in 2012. The company was officially launched in 2013. By 2016 they started moving to a broader space such as conferences, communities, colleges and hotels. She noticed today's dating apps were made by men who fashioned their site on how men wanted it to be. She wanted to challenge this platform by creating an app that would be "safe, fun, with users still having control and privacy," she said. Balace has being included in the list of Forbes 30 under 30.

FORBES - May 21 - Valenice Balace of Manila started an online dating service, Peekawoo, with $640 of her own money. People get to know each other through games and questions. The service has 200K users, 40% active, but has never made money. She has no monetization scheme. In June 2013 at an e-commerce conference, she met a venture capitalist who invested 30K in her business. 6 months later he poured in another $105K. Peekawoo later hit a wall of debt steep enough to make Balace feel depressed and consider shutting the service down. But another venture capital investor from San Francisco suddenly e-mailed this year and offered money without even a pitch. That sum was $500K to be spent over four years.

SEA GLOBE - Feb 24 - Southeast Asian users have caught on to the mobile dating trend, with local dating apps – such as Thailand-based Noonswoon, Peekawoo in the Philippines, Indonesia's Wavoo and Singapore's LunchClick. Paktor is one of Asian's biggest dating apps, boasting 6M users in six key Asian markets. Competition is fierce. Paktor is the only dating app out of 13 that entered the Southeast Asian market at the same time that is still standing. Capturing market share in Southeast Asia involves understanding the social norms of each country. While most of Paktor's advertising in Singapore appears online, regional marketing director Shn Juay says the company adopted a different tack in Indonesia. "We go into university campuses and identify people who could be influencers. We let them try the app, and then share it through word of mouth."

Group Dating Is On The Rise In Asia

AFP - July 29 - While dating apps in the West encourage one-on-one meetings, many singles in in Asia find it awkward and prefer dating in groups. Valenice Balace developed Peekawoo app in the Philippines two years ago. The app discouraged users from meeting one-on-one and offered a chaperone service for those who requested it. As Peekawoo expanded (it has now 7K members) it was no longer practical so they started organising meetups instead. It is a model shared by Hong Kong-based app Grouvly, which sets up groups of six people for dates. Hong Kongers now make up 50% of Grouvly's users. There are plans to roll out the service to Japan, South Korea, Australia and China.

CNN TECH - Mar 22 - Philippines app Peekawoo is a group dating app. Peekawoo's group dates can include up to six people. The app even hosts larger events with "an in-house wing man and wing woman. Woo app launched one year ago and claims 1M users in India. The app doesn't allow married people and rejects ~30% of sing ups a day. Paktor, the Singapore-based app, screens users for fake accounts, and requires them to have at least 50 friends on Facebook to sign up.

Asian Apps Try To Be The Anti-Tinder

WSJ - Feb 12 - Peekawoo is a new dating app based in the Philippines. The app has so far raised $85K and claims 25K. Users create a profile with 5 questions. If users match answers on three out of five questions, it’s a match. Another Asian app, Thrill, has ~100K users. It requires all users – who register using Facebook – to have at least five FB photos and 15 friends. MeetDrinks, an app that recently launched in Asia in Singapore, Bangkok and Shanghai, takes the chatting feature out of online and sets up users for dates.

BBC - Feb 14 - BBC spoke to Valenice Balace, the founder of Peekawoo, and Marc Lesnick, the organizer of iDate (Internet Dating Conference). Peekawoo is an online speed dating app based in Philippines. The app launched in September 2013 and claims 16k users; 32% are active users that come back every week. 65% of users are from Philippines.

"Video chat is the next big thing coming", says Marc Lesnick. "There are people that do really well in the offline world and have no problem of walking up to a woman/men. But some people are shy and the technology allows them to behave a little bit more aggressively and to have a more active social life." Listen to the interview.