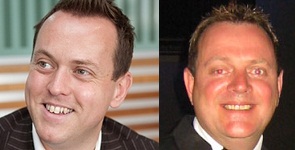 OPW - July 18 - I caught Ross and Max for a few minutes at iDate after we saw a presentation on background checks legislation. Here's what they had to say on the topic of background checks. - Mark Brooks

Mark: We have Ross Williams here from White Label Dating and Max who runs Red Hot Pie out of Australia. Gentlemen, we just saw a session on background checks. What is your opinion on how the industry should proceed with background checks?

Max: Even though the background checks are trying to be protective they lead people into a false sense of security. I think that's the real danger. I’m a big believer that people need to take responsibility of their own actions and their own safety and security.

Mark: In April, Match.com said within 90 days they were going to launch sex offender checks. So they are going to check against the National Sex Offender Registry. What do you think will be the effect on the industry when they do that?

Ross: There is no guarantee to the consumer of the safety of their database. It is a positive step, in certain ways.  But actually I think [background checks] even give a false sense of security, as Max says, because people lie. If I was in the Sex Offender Registry and I knew that Match checked that, would I use my details? Probably not. Would I use fake details with a prepaid MasterCard?  Probably yes.

So all it does is put people into hiding. I think the route we must all take within this industry is the education of consumers and providing a safe environment and good customer care and support. In the UK we offer a free phone support for our customers and so if they have questions they can speak to someone.

Mark: If Match is offering sex offender checks do you think sex offenders are going to drift to other dating sites?

Ross: They will go; anyone will go where there is the greatest opportunity. So it is far better to give people the education and teach them how to date in a safe way.

Mark: Max, you specialize in the sexy side of internet dating. What would your members in Australia feel about this?

Max: We haven’t had a criminal offense or an assault or sexual related charge. It's not an issue on our site.

SMH.COM.AU - July 22 - Jetplace, the operator of dating website Red Hot Pie, has been ordered by the federal court to disclose to its users that it operated 1,371 of its own profiles on the website. Jetplace has been ordered to publish a corrective notice when each user of the website who registered between December 2004 and November 26, 2008 next logs on, and to send a copy of the notice to the email address of each user. Users can also apply for refunds if they can demonstrate that they were misled by the conduct into paying for membership of the website. FULL ARTICLE @ SMH.COM. AU

INDIAN EXPRESS -- May 27 -- As per the RedHotPie.com.au survey, which drew 8763 responses, almost as many women as men instigate the idea of group sex - 46% compared with 54%. The most common reasons given for group sex are excitement, variety and to spice up long-term relationships. FULL ARTICLE @ INDIAN EXPRESS

OPW INTERVIEW -- May 9 -- RedHotPie is a top 10 dating site in Australia. Here’s our interview with the co-founders, Max McGuire and Mark Semaan. - Mark Brooks

What’s your founding story?
Max: Back in 2002, we had a brainstorm that we wanted to get into the digital industry. At the time there was a need for online dating in Australia, particularly with a community feel. Australia was being serviced mainly by the international products that weren’t speaking with an Australian voice. We combined our relevant talents in IT, web development, and sales and marketing, and built RedHotPie.

Tell us more about the Australian voice. How is that different from America and the UK?
Max: Speaking with an Australian voice means the user is able to identify with what the site is saying. In particular, we speak about Australian events or Australian places and in Australian colloquial terms.

Mark: We do offline gatherings, events and parties to get people together and tie the online with the offline aspect.

But you don’t run them yourselves; you let other people run them, correct?
Max: It’s a mutually beneficial arrangement but yes, we have our party and event partners, and we support and promote them. We hand pick them. People approach us and we look at their bonafides and what they’re trying to achieve with their event, and if it fits the RedHotPie model, we jump straight in.

So if you get complaints about a particular brand of event or a particular provider then you would tend to pull it?
Max: Oh absolutely. If there is some problem, we would no longer support them. It’s a very important aspect of taking the cyber out of your product and actually having real world events.

I’m intrigued with the name RedHotPie. Can you tell us how you came about the name?
Max: I think everyone would agree that trying to come up with a name is always a challenge.
We wanted something interesting and quirky. So in the name, the ‘Hot’ part was more saying that we’re edgy, we’re a product with passion, and the ‘Pie’ part was where we wanted to go with having a community. Get your slice of the pie, be part of the pie. So we ended up with RedHotPie.

How are you situated against the likes of RSVP? I think they’re still the number one in Australia.
Max: Yeah, RSVP is a very significant brand name in Australia. They’ve been around the longest and have been brand building an awful long time. They’re sort of what we consider to be a little less flamboyant, or you can call it “vanilla dating”. We like to have a more party feel, a more passion feel, and then again we’re very much more about this community and creating the stickiness and the sense of belonging.

How much would say the webcams have contributed to RedHotPie’s success?
Mark: With the webcam, we focus a lot on the reality aspect of the site. We started on a small scale and every 6 months we add a bigger pipe for the room because it keeps on growing. There is a definite shift that people want to see who they’re communicating with and that it’s real.

Max: And in the Australian marketplace, we were the first with webcam chat where some other Australian based start-ups are still playing around with Java applets and Java chat.

You also have a couple that give advice, Bessie and Geoff. Can you tell us about Bessie and Geoff?
Max: Bessie Bardot and Geoff Barker are partners in life and they have a celebrity status in Australia which makes them recognizable to our users. They’re published authors of books on dating and relationship advice. Geoff’s last book was “What’s On a Man’s Mind?” which was directed more towards giving girls some insights into how the male mind works. It was important for us to have someone our users could identify with.

You have recently launched in the UK I understand.
Max: Yes, we went live in the UK in 2007 so it’s fairly recent in the age of RedHotPie, which is 6 ½ years old now. We’ve spent some time and effort and considerable money branding the product in the UK. We’re working towards traction and market share there.

Have you found the Brits to be different from the Aussies?
I think that most people who are interested in meeting other people, no matter what their cultures or nationalities are, have the same sort of desires or requirements, and probably not too different.