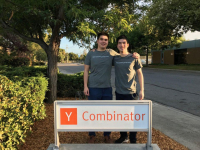 FORBES - Aug 15 - Brothers Emerson and Morris Hsieh understood the social taboos around discussing particular kinks and fetishes and created Waves, the dating app that openly allows for users to match based on their sexual compatibility. Waves is currently a part of YCombinator's Summer 2019 batch. The Hsieh brothers had initially set out to make a medicine technology startup after being admitted into YCombinator in June. However, given the lack of traction, they pivoted into creating Waves after hearing from friends and colleagues about the difficulties of finding sexually compatible partners.