STRAITSTIMES - Feb 28 - Tinder started gaining traction in 2013, opening an office in India last month, while Indian dating apps like TrulyMadly, Woo, and Floh.in - which all promise a more lasting relationship - have since gained attention in a country where over half of the 1.25B population is under 35. The apps are popular with those between the ages of 18 and 34. TrulyMadly has 500k active users. Tinder has seen more than a 400% increase in downloads over the last year. Over the last six months alone, it has gone from 7.5M to 14M swipes every day. Another app, Woo, grew from 10k users in its first month in the southern city of Bangalore to 2M subscribers across the cities when it launched in 2014. It promises "connections not swipes", targeting those aged 25 and above. 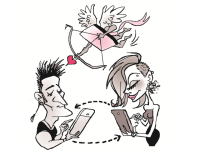 HINDUSTANTIMES - Feb 14 - 2M people are on TrulyMadly, hoping to find a partner. There are many who are on the lookout for a casual relationship, a one-night-stand, or maybe to date for a few months. Less than a decade ago, this was unheard of and people usually met in a social environment or at the workplace. Dating apps like TM, Woo and Tinder are bringing about a tech-revolution of sorts in the world of dating. "We are not promising or helping find love, we are making people meet. Close to 80% of the singles on our app is in the age group of 18-26," said Sachin Bhatia, co-founder and CEO of TM. India has 250M singles according to recent census data. Since 2001, the number of unmarried women between the age of 20 and 29 years has gone up by 60%. Marriage is not the priority anymore, and the millennial generation wants to be with someone they know or are in love with and with people that share their interests, hobbies and profession. "Youngsters are not so much driven by the social fabric; they don't want to outsource their relation to parents," Sumesh Menon, co-founder and CEO of Woo, which too boasts of 2M users. Both Woo and TM claim to be for serious relationships and for singles.

The Business Of Dating Apps Is Disrupting Indian Culture

QUARTZ - Oct 1 - Tinder launched in 2013 in USA. Two years on, India is Tinder's top market in Asia. There are ~7.5M swipes in India each day, according to Tinder's spokesperson. Tinder users in India also send the most messages per match globally. The success of Tinder has encouraged several Indian entrepreneurs to launch dating app such as Woo or TrulyMadly. But the new dating apps are focusing more on women's safety and long term relationships. In March 2015, TrulyMadly raised $5.7M (Rs35 crore). This year has already seen several other dating apps raise funds. In July, iCrushiFlush had raised an undisclosed amount. In November 2014, another dating app Vee raised $1M.

by Shelly Walia & Itika Sharma Punit
The full article was originally published at SBS, but is no longer available.

Woo Announces TagSearch: A Better Way To Find A Partner

THETECHPORTAL - Aug 19 - Titled 'TagSearch', Woo's new feature lets the user decide what kind of people they want to interact with by letting them search and browse user profiles based on interests and passions.

by Mudit Mohilay
The full article was originally published at TheTechPortal, but is no longer available.

See all posts on Woo

ASSOCIATED PRESS - July 7 - Indian dating app market has exploded in recent years, with more than a dozen companies operating in India such as Woo, Thrill, TrulyMadly, HitchUp and DesiCrush. In India, half of the 1.2B population is younger than 25 and smartphone sales are projected to surge 67% this year alone. Dating is still widely seen as a social taboo in India, "it is very difficult to get girls in India to start using a dating app," said Sachin Bhatia, co-founder of India's TrulyMadly. "We realized verification, security and privacy are very important" to women, Bhatia said. TrulyMadly encourages men to upload copies of their IDs, or to verify their phone numbers. The app Thrill sidelines up to 35% of male users, without telling them, to a so-called "phantom zone" where they can still log on and view others' profiles, but can't make contact and are invisible to other users.

by Rishab R. Jain
The full article was originally published at Denver Post, but is no longer available.

Indians Use Dating Apps To Find A Life Partner

BUSINESS INSIDER - June 8 - In India, parents used to be the main decision makers when it came to marriage. They would fix the marriage based on caste, gothra, religion, family background, etc. But now the youngsters are the ones who are taking this decision for themselves. Dating app Woo was founded by Mr Sumesh Menon, CEO and Co-founder. Woo is one of India's leading matchmaking app for urban singles seeking a life partner.