S'More Is Heading to Hollywood

TECH CRUNCH - Jan 27 - S'More has signed a production deal with producers Elvia Van Es Oliva and Jack Tarantino, who have worked on shows like "90 Day Fiancé." CEO Cohen-Aslatei said the startup will work with them to create "anti-superficial" dating content for digital platforms and TV networks. This deal builds on the success of S'More Live, the startup's celebrity dating show on Instagram Live, which has aired 60 episodes so far.

See the top news on S'More

TECH CRUNCH - July 3 - S'More, whose name is short for "something more", launched last fall and has supposedly attracted ~50K users. The dating app has recently launched a video calling feature. The video is blurred for the first two minutes, which means users have got to start an interesting conversation before they can see who they're talking to. S'More has also expanded geographically, launching last week in Los Angeles.

See the top news on S'More

TECH CRUNCH - July 2 - Previously, Match Group was a publicly-traded company, with digital holding company IAC as its majority shareholder. Last year, the companies announced a plan that would see IAC's ownership of Match distributed to IAC's shareholders - a plan that is now completed. The separation also involves a leadership change, with Mark Stein and Gregg Winiarski stepping down from the Match Group board. The company has four new board members: ExecOnline CEO Stephen Bailey, the NBA's executive president for digital media Melissa Brenner, investor and entrepreneur Wendi Murdoch and actor Ryan Reynolds. Shar Dubey will continue to serve as Match Group's CEO, a position she took at the beginning of this year, while Joey Levin remains a both IAC's CEO and Match Group's executive chairman.

IAC Outlines Its Plans for a Match Group Spinoff

TECH CRUNCH - Oct 11 - IAC has taken the next step toward spinning off Match Group, with a proposal outlining what that process would look like. Match Group is already a publicly-traded company, but IAC remains the majority owner. With the spinoff, IAC says it should distribute its Match Group shares to IAC stockholders, "resulting in two independent public companies." Under the proposal, Match Group's dual-class stock structure would be eliminated, creating a single class of stock.

See all posts on Match Group

TECH CRUNCH - Oct 9 - Last week, former Tinder CEO Greg Blatt filed a defamation lawsuit against Sean Rad and Rosette Pambakian, who are part of a group of Tinder founders and former executives who accused Blatt of sexual harassment and assault as part of a broader suit. Now Rad and Pambakian's attorneys have filed their own motion to dismiss the suit, arguing that it "seeks to chill protected speech through costly litigation" - in other words, that it's the kind of lawsuit prohibited under California's anti-SLAPP law.

TECH CRUNCH - Dec 19 - Tinder has fired its VP of marketing and communications Rosette Pambakian, as well as other employees who sued Tinder's parent company Match Group and IAC earlier this year. In an email sent to Match Group's current CEO Mandy Ginsberg, Pambakian said that after being placed on leave when the lawsuit was filed, she was subjected to "ongoing intimidation and retaliation clearly designed to pressure me into resigning." Pambakian also said that after she declined to sign a non-disparagement agreement, "Match snuck an arbitration clause into its employees' most recent compliance acknowledgements, causing me, Jonathan, James and Josh to have to withdraw from the lawsuit. As a woman CEO, I truly hope that you reconsider the safety of your remaining female workforce and allow Tinder and other Match owned companies to follow in the footsteps of Uber, Facebook and Google in eliminating forced arbitration for sexual misconduct claims. We deserve better." In response, Ginsberg denied that Pambakian was fired for complaining about sexual harassment: "You couldn't have been, as you never reported Greg for sexual harassment. You were terminated because it was not possible for you to fulfill the duties and responsibilities of your role as Tinder's spokesperson for a number of reasons, including your public position against the company over a valuation process," Ginsberg continued. 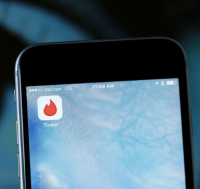 TECH CRUNCH - Aug 14 - A group of Tinder founders and executives has filed a lawsuit against parent company Match Group and its controlling shareholder IAC. The plaintiffs in the suit include Tinder co-founders Sean Rad, Justin Mateen and Jonathan Badeen who still works at Tinder, as do plaintiffs James Kim (the company's vice president of finance) and Rosette Pambakian (its vice president of marketing and communications). The suit alleges that IAC and Match Group manipulated financial data in order to create "a fake lowball valuation", then stripped Rad, Mateen, Badeen and others of their stock options. The lawsuit also alleges that Greg Blatt, the Match CEO who became CEO of Tinder, groped and sexually harassed Pambakian at the company's 2016 holiday party, supposedly leading the company to "whitewash" his actions long enough for him to complete the valuation of Tinder and its merger with Match Group, and then to announce his departure. The plaintiffs are asking for "compensatory damages in an amount to be determined at trial, but not less than $2B."

Match Group statement: The allegations in the complaint are meritless, and IAC and Match Group intend to vigorously defend against them. Match Group and the plaintiffs went through a rigorous, contractually – defined valuation process involving two independent global investment banks, and Mr. Rad and his merry band of plaintiffs did not like the outcome. Mr. Rad and Mr. Mateen may not like the fact that Tinder has experienced enormous success following their respective departures. Mr. Rad has a rich history of outlandish public statements, and this lawsuit contains just another series of them. We look forward to defending our position in court.

Summarized by the IDEA team

Tonight Is A New Dating App Optimized For Real Dates

TECH CRUNCH - Oct 26 - When Whim launched two years ago, it was based on enabling real dates, rather than chatting. But there was one problem: Whim asked users to identify the days in a given week when they'd be free for dates. "Planning ahead was hard for people," said Founder and CEO Eve Peters. So after raising money through equity crowdfunding, Peters and her team have launched a new iOS app called Tonight. The app preserves the most distinctive part of Whim - as soon as two people show interest in each other, the app tries to set them up on a date, no messaging required. With Tonight, users are no longer scheduling those dates ahead of time. Instead, they sign on when they're free for a date that very evening. They will need to sign in by 6pm. In addition, they get penalized for flaking out, and they're eventually removed if they keep doing it.

See all posts on Whim

The League Wants To End Ghosting

TECH CRUNCH - Mar 18 - The exclusive dating app adds "read receipts", a new feature that could help the paid members to figure out if someone's deliberately ignoring them or if they just haven't opened the app in a while. The League membership costs $179.99/year and includes features like profile feedback and access to more potential matches.

See all posts on The League

Ona Could Help You Get Better At Dating With An Online Dating Coach, Therapist Or Matchmaker

TECH CRUNCH - Feb 7 - A startup called Ona is offering professional support to online daters. "It's about learning how to date better, using specialists," said co-founder Eric Berkowitz. Ona offers date coaching, consulting, therapy and matchmaking. The startup will charge $75 and $200 for their "core service," with possible premium services for an extra charge. The app is currently available for iOS users in New York City.

TECH CRUNCH - May 2 - On Tastemates, users are asked to swipe to indicate whether they liked a given movie, TV show or music. Then, as the app gets a better sense of what users like, it will recommend other things they might like. And it will bring up the activity of users with similar tastes, so they can connect. Tastemates is currently available for Android and the team behind the app is also working on an iPhone app.

TECH CRUNCH - Apr 29 - The League, the elite dating startup, is launching version 2.0 in LA. The League is best-known for its screening process of new members before they can join. The screening is still part of the app, but what's new is a focus on events. Members will now be able to create interest groups with group chat and also organize events.

See all posts on The League

TECH CRUNCH - Oct 20 - Squad, a New York base startup, is officially launching its iOS app today, it's also announcing a raise of $1.7M in seed funding. According to founder and CEO Adam Liebman, squad is designed to facilitate more casual group meetups. Dating and hookup is not its main goal. He said the idea came from a trip to Montreal, where he "hacked Tinder" by turning his profile into a group profile that allowed him and his friends to meet new people while traveling. The Squad app is free. Liebman said the current focus is on "creating a great product," but eventually, he plans to make money through ads.

Barry Diller: "Tinder Succeeded Because We Left Its Founders Alone"

TECH CRUNCH - Dec 4 - IAC Chairman Barry Diller talked about Tinder while onstage today at Business Insider’s Ignition conference. He did not directly address the fact that co-founder Sean Rad will step down from his role as CEO. Instead he said that leaving Tinder to the founders was key to its early success. Rad’s co-founder Justin Mateen had already been suspended from the company following a sexual harassment lawsuit from former VP of marketing Whitney Wolfe.

Tinder Has Made 1 Billion Matches

TECH CRUNCH - Mar 14 - Tinder is announcing that it has made 1B matches between its users. The company isn’t disclosing how many registered or active users it has.