ADWEEK - Tinder's latest feature, Explore, allows members to swipe based on interests. That said, the dating app also wants users to manage their expectations and understand that they won't necessarily hit it off with every person they encounter. With that in mind, the brand launched a new campaign aptly titled "You're Not For Everyone."

TINDER PRESS ROOM - Tinder has released its "Year in Swipe 2021" infographic, where the app looks back on how the last 12 months unfolded on the app. In 2021, Gen Z enjoyed both virtual meet-cutes and post-vax IRL dates. Video dates have turned into a first date staple for singletons with mentions of "video call" in Tinder bios growing by 52% globally. First date ideas ranged from cozy to outdoorsy. Being vaxxed became a (dating) flex.

REUTERS - Tinder is exploring how to blur the boundaries between offline and online worlds, said CEO Renate Nyborg at the Reuters Next conference. Asked about the company's plans around dating in the metaverse, Nyborg said: "From a Tinder perspective, we've been talking about a Tinderverse internally, which is more about blurring the boundaries between offline and online." The metaverse broadly refers to the idea of shared virtual spaces that people can access through different devices and where they can move through digital environments. These spaces may use virtual reality (VR) or augmented reality (AR). Facebook, which recently changed its name to Meta Platforms Inc, is one of the many tech companies making bets on metaverse technologies. Bumble said during its November earnings call that it wants to prepare for "whatever emerges in the metaverse." To watch the Reuters Next conference register here.

GLOBE AND MAIL - An Ontario judge has dismissed appeals by a former Facebook executive and two Toronto venture capitalists to overturn a 2019 decision that found they owed more ~$15M in damages and lost profit to the investors' former business partners after the sale of a company that held an interest in Tinder. Justice William Hourigan took the original Superior Court of Justice decision further, ordering that the appellants pay the entire $29.5M profit from the sale, plus costs and interest, to the venture capitalists who successfully beat the appeal. In 2012, Extreme Venture Partners sold a software company called Xtreme Labs to Chamath Palihapitiya, a Silicon Valley investor and former Facebook executive, valuing the company at $18M. At the time, Xtreme Labs had a 13% stake in another company called Hatch Labs - which had developed a dating app called Tinder. Court filings show that two principals of Extreme Venture Partners, Amar Varma and Sundeep Madra, kept an interest in Xtreme Labs after the 2012 sale. Mr. Varma, Mr. Madra and Mr. Palihapitiya later sold Hatch Labs to an American company in 2014 for $29.5M.

by Josh O'Kane
See full article at Globe and Mail

SEEKING ALPHA - Tinder's co-founder and eight current and former execs sued Match and IAC for $2B in damages in 2018 alleging the valuation of the company was manipulated during a 2017 bank analysis that set the value for stock options. Match Group has agreed to pay plaintiffs $441M cash and will dismiss all claims presently on trial and in arbitration related to the 2017 Tinder valuation. Match rose 1.4% in premarket trading.

WALL STREET JOURNAL - Investors are dumping Match amid ongoing litigation risk. Match's shares are down ~17% since the trial began in November. Investors are overestimating the risks. A litigation analyst for Bloomberg Intelligence recently predicted Match has a 75% chance of winning the case. A 2017 report from Barclays showed Tinder did $176M in revenue in 2016 and, as of the Q1 of 2017, had less than a fifth of the payers it has today. No one predicted how much money Tinder Gold would make. According to Barclays Tinder's management predicted $454M in revenue in 2018 and Rad $503M. Barclays landed in the middle at $485M, significantly below the $800M the app actually ended up generating that year. Rad predicted 2020 revenue to be $892M. Last year, the app made $1.4B for Match. The banks ultimately valued Tinder at $3B in 2017, while the plaintiffs argue it should have been worth $13B.The case is set to go to a jury in early December. For Match, the worst case scenario seems unlikely. The judge has already said valuations of dating companies today can't be taken into account.

BLOOMBERG LAW - Sean Rad says Greg Blatt 'crossed the line' with arm grab. The way Match Group Chairman and CEO Greg Blatt tells it, he hadn't seen Tinder founder Sean Rad in years and, even though they were now on opposite sides of a multibillion-dollar trial, he wanted to say hello. The judge declined to allow Rad's lawyers to question Blatt about the encounter in front of jury, but he warned Blatt not to make further contact with the plaintiffs or their lawyers. The exchange is illustrative of the combative nature of the trial, which just entered its third week and is expected to continue through Dec. 3. On the stand Monday, Blatt denied trying to steer the $3B valuation, which he said was similar to the amount Wall Street analysts had estimated. Rad claims Tinder was actually worth $13B at the time.

MANNING RIVER TIMES - Tinder has launched a safety campaign amid concerns that "sexual assaults linked to online apps are becoming more frequent". Queensland Police and Tinder launched the joint campaign on Friday, which will see messages appear while users are swiping for potential matches within the app. "Report sexual assault for yourselves and others," one of the messages read. "We're all here for different things. Hook up. Doggos. Friendship. Relationship. Nothing is set in stone," another read.

THE HILL - Match, Tinder, OkCupid, BLK, Chispa and Plenty of Fish, all of which are part of Match Group, have prompted their users to send an email to their senators "with one click," urging them to support the reauthorization of the Violence Against Women Act. The Violence Against Women Act, originally enacted in 1994, lapsed in 2019 and has not been reauthorized since. The bill would provide grants to state and local governments for programs addressing domestic abuse, sexual assault, dating violence and stalking, in addition to further narrowing the so-called boyfriend loophole to prohibit dating partners convicted of domestic violence or abuse from buying or owning guns. Current law only restricts gun purchases for spouses or formerly married partners who were convicted of abuse or are under a restraining order.

by Mychael Schnell
See full article at The Hill

VARIETY - Tinder has hired its first ever content executive. Former NBCUniversal exec Jaime Freedman will be responsible for building out a strategy that will feed current and future "shared experiences" across the company. Freedman has ~15 years of experience across industries including entertainment, lifestyle and media. She spent the past four years overseeing digital growth and audience strategy for E! News. 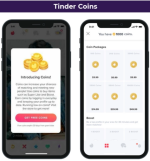 TECH CRUNCH - Match spoke today about its broader plans for a dating "metaverse," and avatar-based virtual experiences that may later roll out to apps across its portfolio, including Tinder. In terms of the virtual economy, the first phase of its development includes Tinder Coins, which are already being tested in several markets, including a few countries in Europe. Next year, Tinder Coins will become available to global users to make in-app purchases of Tinder's à la carte products, like Boost and Super Like. Longer-term, however, Tinder will evolve its app to include virtual goods and a trading ecosystem, which is being planned for 2022 and beyond. Match Group also spoke about Hyperconnect's test of an avatar-based dating app and "metaverse" experience called Single Town, where users interact using real-time audio and meet each other in virtual spaces. This type of interactivity is something Match Group eventually wants to leverage across its portfolio.

TECH CRUNCH - Tinder is bringing back "Swipe Night," its interactive in-app event that allows its users another way to break the ice. After the first season's "choose your own adventure" apocalyptic storyline brought in ~20M users. "Swipe Night: Killer Weekend," will kick off on November 7th at 6 PM.

Former Tinder CEO Greg Blatt Valued Tinder at $12B in 2016

DAILYMAIL.CO.UK - Former Tinder CEO Greg Blatt is accused of intentionally lowballing the dating app's value in order to cheat employees out of billions of dollars in stock options. In 2016, he estimated Tinder's worth at $12B, far more than the $3B value projected the following year, according to internal emails. A group of former employees, including founder Sean Rad, will be using those emails from 2016 in an upcoming trial to try to prove Blatt intentionally lowballed the value in 2017, denying banks information they needed to make an accurate assessment. In August of this year, a Morgan Stanley analyst report valued Tinder at $42B. The defense says the so-called 'recruiting deck' in January 2016 was based on hypothetical numbers and is not at all the same as a third-party valuation. While the chart did say that Tinder could grow if certain conditions were met, those conditions had not been met by 2017, they argue.

5 DARIYA NEWS - Tinder is rolling out a series titled 'The Swipe Ride' about uninhibited conversations on what women really expect from their dating lives in the Indian context. Social media creator Kusha Kapila will pick up Tinder members on their way to meet their dates. The two will talk about dating and intimacy and modern beliefs. Bollywood actress Sara Ali Khan will join the conversation with two women this week. The first episode of 'The Swipe Ride' premieres Friday on Tinder's YouTube channel.

Mark Brooks: Advertising is becoming more social. What is your app doing to work with social media creators?