MARKETING INTERACTIVE - Former Circles.Life head of marketing, Delbert Ty, has joined dating app, Coffee Meets Bagel as global CMO. In his new role, Ty will be responsible for scaling the growth of CMB, while reporting to CEO Arum Kang. Ty has also had marketing experience working with the likes of Duracell and P&G.

FOX NEWS RADIO - This week, Liz Claman is joined by the co-founder of dating app Coffee Meets Bagel, Dawoon Kang, to discuss how she went from Korean immigrant to a successful entrepreneur. Dawoon shares how challenging it was to assimilate into a new country and culture. She also explains how she faced adversity to build a new dating app focused on long-term relationships. 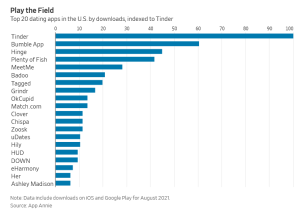 WALL STREET JOURNAL - Since Jan '19, App Annie data show U.S. users have spent 7.4M hours on dating apps a month on Android phones alone. Match Group and Bumble collectively boast ~$50B in fully diluted market value, but plenty of businesses are trying. Coffee Meets Bagel, which hits users with algorithmically curated matches every day at noon, has made ~130M matches since its launch in 2012. Hily, which works to make it easier to start conversations, has 22M users. Snack, which is focused on video-first dating, was the 10th most-downloaded dating app in the U.S. last month, according to App Annie. Some just need a larger platform to help them take off. Hinge, in which Match took a majority stake in 2018 before acquiring it in 2019, saw ~100K U.S. downloads in Jan '18. By Mar '21, it was closer to 600K. Berlin-based Spark Networks did $233M in revenue last year. And then there is eHarmony owner ParshipMeet, which is preparing for a 2022 IPO. In the Q2 it had €139M ($164.2M) in revenue.

FORBES - Aug 5 - The art and science of matchmaking is a billion-dollar industry. Yet, many pitfalls exist such as safety, security and ineffective matching methods. These issues aren't as prevalent with professional matchmakers, however, not every singleton can afford to pay $15K and $150K for a high-end matchmaking service. This exposes a huge opening in the industry for dating apps and professional matchmakers to merge. How realistic is this, and what kind of technology or science can help achieve this idealistic goal?

Blockchain Technology
Companies such as Hicky and Viola have both implemented blockchain to increase transparency by requiring users to validate their identity via face and voice recognition, which is then fully encrypted and stored into the blockchain.

Augmented Reality
AR can be described as a visual or audio overlay of digital life on real life, distinct from the purely digital landscape of virtual reality (VR).

DNA Matchmaking
DNA Romance is a dating app that matches partners based on the information hidden in their DNA to forecast romantic chemistry. Dr. Tim Sexton built the app on the basis that partners with opposite immune system genes (MHC genes) have much higher romantic chemistry.

YAHOO FINANCE - May 26 - CEO of Coffee Meets Bagel, Dawoon Kang, joins Yahoo Finance to discuss their new 'ready to meet' tool to make people comfortable dating post-pandemic and how the pandemic has changed dating. Ready to Meet makes it easy for users to indicate if they're ready to meet in person. 65% of said they are more likely to like somebody who is vaccinated. Watch the full interview here.

Does Banning People With Felonies From Dating Apps Make Anyone Safer?

THE MARSHALL PROJECT - May 20 - Match Group plans to launch a feature allowing daters to run background checks on potential matches. The company says its efforts are aimed at keeping users safe. But civil rights advocates say the record checks extend an unfair practice of imposing "collateral consequences" long after people have finished their sentences. "Meeting strangers can be risky, and I worry that this approach will mislead people into thinking they're safe," said Sarah Lageson, a Rutgers University sociologist who studies the growing use of online criminal records. People with felonies - anything from a $10 drug conviction to capital murder - are banned for life from some dating apps including Match Group's apps, Coffee Meets Bagel, Zoosk. A representative for The Meet Group said that only two of the company's apps - Skout and GROWLr - have a ban, based on policies it inherited when it acquired those apps. The representative said The Meet Group would reconsider that part of the policy.

by Keri Blakinger
See full article at The Marshall Project

Founder of Coffee Meets Bagel: "Being an Immigrant Had a Huge Impact on My Identity"

CNBC - May 4 - This story is part of the Behind the Desk series where CNBC gets personal with successful business executives to find out everything from how they got to where they are to what makes them get out of bed in the morning to their daily routines. For Dawoon Kang, co-founder of dating app Coffee Meets Bagel, entrepreneurship is in her blood. Both her parents started their own businesses in Korea. Kang emigrated from Korea to the U.S. when she was 12 with her sisters Arum and Soo. Arum had the idea to create Coffee Meets Bagel in 2011, and the following year Kang quit her job at JPMorgan to launch the app with Arum and Soo.

Is It Worth Paying a Premium to Find Love?

THE GUARDIAN - Apr 25 - Tinder has three levels of subscription, Tinder Plus, Tinder Gold and Tinder Platinum, each with different prices. The monthly fee is also linked to age. Users aged ~30 are being charged £27.49 or £29.49, while those under 30 are being charged £13.99 or £14.49. Tinder Plus seemed more random. Some users over 30 are being charged £19.49, most are being asked to pay £4.99, £8.99 or £9.99. Bumble charges £14.99 a month for Bumble Boost, and £32.99 for Bumble Premium. Coffee Meets Bagel charges £34 a month for its Premium service. Grindr also offers a more expensive package - Unlimited, at £31.99 a month. While most apps allow users to pay for premium services for just a month at a time, Plenty of Fish has a minimum premium subscription of three months for £39.99. The minimum time period to subscribe to eharmony's premium subscription is six months for £99.99. The dating and relationships coach Kate Mansfield argues that the most dateable people will be snapped up before they sign up for a paid-for service. Quality, confident people don't need to pay for matchmaking services. Instead of a paid-for app, she advises working on yourself: "Invest in coaching or therapy to get yourself in the best place possible and then use apps' free version to find love."

by Robert Beck
See full article at The Guardian

NEW YORK POST - Mar 12 - Coffee Meets Bagel is adding a person's COVID-19 vaccine status to their profiles. This new feature comes as some 19% of the US population has received at least one dose. On Monday, the Centers for Disease Control and Prevention released new guidelines for those who have been fully vaccinated. People who have been vaccinated can gather indoors - and without masks - with others who have done the same.

How Female Entrepreneurs Are Changing the Online Dating Landscape

FORBES - Mar 8 - Bumble founder Whitney Wolfe Herd recently became the world's youngest self-made billionaire after her dating app's wildly successful IPO. Bumble's success serves as a wake-up call for an industry that has traditionally been dominated by male leadership. Kim Kaplan, who was also part of the founding team of Plenty of Fish, launched Snack, a dating app that blends video with communication features popularized by Tinder and Bumble. Wolfe Herd and Kaplan are not the only women founders and executives changing the dating app game for the better. Based in San Francisco, the three Kang sisters - Arum, Dawoon and Soo - cofounded the dating app Coffee Meets Bagel. Another female founder, Amanda Bradford saw the need for ambitious, working professionals. She launched The League, a dating app that draws member information from LinkedIn.

New Niche - A Dating App Only for the Vaccinated?

THE STAR - Feb 16 - Samantha Yammine, a scientist who often talks on Twitter about health issues, says she's received messages about "dudes on dating apps claiming they're 'totally safe for close contact' because they have received the vaccine. "Basically, getting the vaccine is the hottest thing you could be doing on a dating app right now," said Michael Kaye, global communications manager for OkCupid. 43% of ~1,500 members of another site, Coffee Meets Bagel, said they were right now more attracted to someone who had been vaccinated. For university student Brittany Biggerstaff, people who say they are vaccinated are not more attractive because of the shot - but it does mean they have put their faith in science. "It gives insight on a potential partner's political views and knowledge about science and medicine," she said. Dawoon Kang, the co-founder of Coffee Meets Bagel, agrees.

See full article at The Star

CMB's First "Save the Date" Podcast With Author Jess McCann

OPW - Oct 4 - "Save the Date" is Coffee Meets Bagel's new podcast. Each episode, CMB's Chief Dating Officer Dawoon Kang invites an expert to explore what it takes to go on great dates. Jess McCann is a dating/relationship coach and the author of the books, "Cursed?", "You Lost Him at Hello" and "Was It Something I Said?". She has coached men and women on how to get the relationship they have always wanted.