CELEBRITY NET WORTH - Aug 27 - Russian entrepreneur Andrey Andreev is the king of dating apps. He's the man behind five successful online dating apps - Badoo, Chappy, Huggle, Mamba and Bumble. He was born Andrey Ogandzhantyants in Moscow but changed his name to his mother's maiden name because it was easier to spell. He's always been passionate about technology. He briefly attended the University of Moscow but dropped out at age 18 to move to Spain. In 1995, he founded Virus, an e-commerce site that sold computers and accessories to internet users in Russia. In 1997, he sold it for a few hundred thousand dollars. In 1999, he founded SpyLog, which was software that tracked visitors to websites. It was basically Google Analytics before that lunched in 2005. Andreev left SpyLog in December 2001. In 2002, he built Begun, a contextual ads company. Google almost bought Begun in 2008 for $140M but the deal never went through. Begun still exists, but Andreev left in early 2004. Andreev founded Badoo in Spain in 2006 and launched it in 2009. The company's headquarters are in London and there is a Moscow office. Badoo employs 300 people. Andreev will not disclose Badoo's revenue but said that Match Group is a good comparison for Badoo.

by Amy Lamare
See full article at Celebrity Net Worth

The Story Of Huggle, A Dating App Acquired By Badoo

STANDARD.CO.UK - May 4 - The social app Huggle was recently acquired by Badoo. Launched in 2016, the app connects people based on mutual places and interests. Huggle was founded by Stina Sanders and Valerie Stark. Stark had moved to London from Russia and was finding it hard to make friends in a new city. She turned to social media, using Instagram's geo-location feature to find people who frequented the same places as her. The two eventually met at the same yoga studio and struck up the friendship that would lead to the app's beginning. Neither Sanders nor Stark had a background in tech but they were able to use Stark's connection to Andrey Andreev, the founder of Badoo, through a previous business partner to get the app started. Huggle was built using Badoo's back-end. This took care of the tech side of things and allowed Sanders and Stark to set about building the business, focusing on marketing and design.

BUSINESS CLOUD - Mar 16 - Dating app Badoo has acquired dating app Huggle along with its internal marketing team. Huggle is a dating and friendship app which matches users based on the places they have in common. It was launched in 2016 by co-founders Valerie Stark and Stina Sanders. The brand has since attracted 500k users, including celebrities such as Katie Price and Bella Thorne. 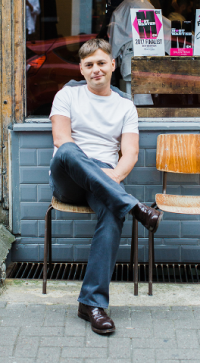 FORBES RUSSIA - Mar 6 - The founder of Mamba and Badoo, Andrey Andreev enters the global Forbes richest list with a fortune of $1.5B. Andrey Andreev (43) is not at all like a billionaire. "Such an eclectic, quirky, creative, that the industry needs very much. I hope he does not sell his company in the near future," says Brooks, senior consultant at Courtland Brooks. He recalls the first meeting with Andreev: the businessman appeared in his white T-shirt, asked the necessary questions and left without losing a minute. But on another occasion, after going to Brooks for a meeting of heads of dating Internet services, Andreev spent half a night in the kitchen, preparing his famous soup, which was served in a Michelin star London restaurant.

In 1999 Andreev launched the web analytics service SpyLog, and in 2002, the contextual ad service "Begun". Andreev created the Russian dating service "Mamba" a year later. The service made its first revenues through SMS. In Oct. 2005, with 4.5M members, Finam bought it for $20M, enough to launch Badoo in 2006, a service combining the dating and social networking. At the end of 2017 there were 370M members.

Andreev lived for many years in Spain, and his knowledge of the Spanish mentality helped him promote Badoo in Europe and Latin America. But to conquer more competitive markets in the US and English-speaking countries, this was not enough. In order to enter the American market, Andreev bought Hot Or Not in 2014. He then introduced swiping.

He now launches new companies only if there's a manager able to deal with operations, while he deals with the financing, product support and monetization. Andreev helped Huggle in exchange for a stake, and also in Chappy.

Bumble launched Dec. 2014 and had 100k downloads the first month. The idea of ​​a dating service where women take the initiative turned out to be a godsend for the American market. He invested $10M for a 78.21% stake. Herd became CEO and took a 20% stake. $100M revenue is expected in 2017, and double this year.

"The service is significantly different from Badoo. Guys will go where there are a lot of girls, and are attracted to proactive girls who think in a modern way and are ready to take the first step," explains Mark Brooks about the secret of Bumble's success. Tinder has 50M active users and worth is estimated at $3B. Bumble has 23M users. This year, Herd refused to sell it for $450M to Match Group. In the autumn Match reportedly upped its offer to over $1B. In the past, Andreev was offered to sell Badoo for several hundred million dollars, says Mark Brooks, and now the company, "But it seems to me that Andreev is not ready to retire," the expert concludes.

This Is How Much Dating Apps Make Every Minute

APP DEVELOPER MAGAZINE - Dec 7 - Tech buy-back site Decluttr has crunched some numbers, looking at just how much money apps like Tinder, Bumble and Match are making every minute. Tinder is making ~$1,500 per minute. Bumble makes $172 per minute. Match and Plenty of Fish come in at third and fourth place, earning $134 and $78 per minute, respectively. Ashley Madison has struggled to recover from its 2015 data breach controversy, now making just $28 per minute. New startup Huggle is currently making just $0.10 per minute. However, with over 45M places logged in the app already, and a growing number of celebrity fans, we may see Huggle climb the rankings in 2018.

Q&A With Founders Of Huggle, The Friendship And Dating App

STANDARD.CO.UK - Mar 14 - Huggle founders Stina Sanders and Valerie Stark talk success, goals and going global. They started Huggle, a friendship and dating app, which shuns appearance matching and connects its users based mutual interests and the places they have in common instead.

Q: How did Huggle go from being an idea to an app?
A: We took our idea to a tech investor who backed Bumble. Once we had gone through the process of securing our investment, we went ahead and started to design the app. We had a soft launch in 2015 and eventually Huggle launched in July 2016 – going global in October.

Q: Where do you think Huggle has bridged a gap in the market?
A: The majority of apps connect people by appearance. We match people based on the places they go. I love seeing who else goes to the places I go.

Q: What made you branch into the dating sector?
A: The app launched as a platonic app but we couldn’t ignore the fact that people wanted to look for dates too.

Q: What advice would you give to other women who are looking to get into the tech industry?
A: Jump in and learn. Be a sponge.

Q: What's next for Huggle?
A: New design, new features, new brand parterships and we are also continuing to build our U.S marketing team.

See all posts on Huggle

BUSINESS INSIDER - July 2 - A new survey, carried out by social app Huggle, has found that 62% of people say dating apps like Tinder make them feel self-conscious and depressed about their appearance. Huggle doesn't use "face-swiping" and matches people based on the locations they go to. It works in a similar way to French dating app Happn. Huggle has received investment from Andrey Andreev, the Russian entrepreneur who cofounded dating app and social network Badoo. Huggle was founded by model Stina Sanders and gardening blogger Valerie Stark.