WASHINGTON POST - Dec 27 - After starting in 2017, Personals Instagram page became a hugely popular place for people to meet a partner or to make a friend, attracting 60K followers. Last month, founder Kelly Rakowski took the next step of turning it into its own app, Lex, creating a rare queer-centric platform for romance and friendship. Lex was financed by a Kickstarter campaign that raised $50K. The profiles look similar to those on Personals - minimalist, no photos - but users can message privately and set geographic boundaries.

THE CUT - Nov 12 - Last year, Kelly Rakowski started Personals, a modern reimagining of dyke-centric ads from the pages of the '80s and '90s lesbian erotica magazine On Our Backs. In early November, she announced Personals would be making a major move, launching its own app with a new name: Lex. After months of beta testing from Kickstarter supporters, Lex (as in "lexicon") is now available for free download, offering the same text-based personal ads and missed connections. Rakowski says an app was necessary based on the number of ads she began receiving. A 2018 Kickstarter campaign raised ~$50K, which all went to the development of Lex. Anyone who donated to the campaign were early beta testers of the app, providing crucial feedback. On launch day, Lex saw 6K downloads.

by Trish Bendix
See full aticle at The Cut

Why Millennials Are Burnt Out on Swipe-Based Dating Apps

MENSHEALTH - Feb 6 - Hinge's user base grew by 400% in 2017 after it eliminated its swiping feature. Once, a dating app that sends users one suggested match per day, reached 7M downloads last May. Still, swiping or not, some are giving up dating apps altogether, opting for offline dating and matchmaking services like Three Day Rule, which doubled its revenue in 2017, and now serves 10 cities in the U.S. "The online dating thing never came naturally to me. I found the experience quite overwhelming," says Tina Wilson, CEO and founder of the matchmaking app Wingman. "Trying to describe myself for a profile gave me anxiety." Eventually, Wilson's friends got involved. "They had way better insight into who I should be dating and loved to tell me so," she says. She realized her friends could play a vital role in helping her meet a compatible partner, so she created Wingman, an app that allows users' friends play matchmaker. Text-based apps are also on the rise. A spin-off of the popular Instagram account @_personals_, the Personals app will allow its lesbian, queer, transgender, and nonbinary users to post old-school personal ads.

Personals, a New Instagram Dating Community for LGBT, to Launch as a Dating App 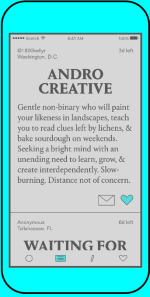 FORBES - Nov 14 - Kelly Rakowski didn't intend to start a dating service, especially not one based on the seemingly antiquated personal ad. With her upcoming app, Personals, however, Rakowski is demonstrating that personal ads may be far from obsolete. It started with an accidental discovery. For four years, Rakowski had been running the popular Instagram account, @h_e_r_s_t_o_r_y, which showcases lesbian culture throughout history, when she found a group of personal ads written in the back of some 80s and 90s lesbian magazines. After a while, she asked the @h_e_r_s_t_o_r_y community to submit personal ads of their own. As she posted the submitted ads, people began using them to connect. There were so many submissions that Rakowski had to start a separate Instagram account, which she has run for the past two years. Now, there are even too many submissions for that account to sustain. That's where the dating app comes in. Personals will resemble the feel of Instagram and is designed for the LBTQ community. For now, it is not available to cisgender gay men because Rakowski feels there are already many options for them. "It's important for us to take our space first," she says.

NEW YORK TIMES - Aug 4 - Old-school personal ads are the currency of Personals, an Instagram dating community built for lesbians; bisexual, transgender, queer, intersex and asexual women; and gender-nonconforming and nonbinary people. The page, which has 40K followers, works like this: Text-based personal ads are submitted once a month. Ms. Rakowski then publishes them as Instagram posts and tags the people who submitted them. Interested parties can get in touch directly. Ms. Rakowski, 39, is a photo editor at Metropolis magazine and the creator of Herstory, an Instagram account that surfaces lesbian imagery from as early as the 1800s. This summer, she raised ~$48K on Kickstarter for a prototype version that will still use the typewriter font and gender-neutral aqua palette. Instead of swiping, users browse a continuous feed, much like the user experience of Facebook or Twitter.

WIRED - July 10 - Kelly Rakowski started an Instagram account called Personals where people can post their dating ads. She has 35K followers now. She wanted to create a way for people to find each other through their phones without the frustrations of dating apps. "You have to be present to write these ads," she says. "You're not just throwing up your selfie. It's a friendly environment; it feels healthier than Tinder." And now, she wants to an app. The Personals app will focus on the things people say and the ways others connect to them. The Personals' Kickstarter is about to reach its $40k goal so Rakowski will be able to turn the ads into a fully-functioning platform.