KATU - Oct 21 - Tina Wilson, CEO of dating app Wingman, talks about her dating app where users' friends and family write the profile and pick dates for them.

See the top news on Wingman

STANDARD.CO.UK - May 4 - Dating app Wingman is providing London bus drivers with free face bandanas, amid fears of a lack adequate personal protective equipment. ~1K 'It's not about You' bandanas have been distributed to drivers across the capital, mimicking face masks, who are working during the Covid-19 lockdown. Wingman is a dating app that allows friends and family to search for and introduce potential matches to a single friend.

See the top news on Wingman

ESQUIRE - Mar 18 - Tina Wilson is the founder of Wingman, a 3-year-old app that allows users to recruit friends and family to swipe on their behalf. Like many, she was irritated by the fake profiles and bad matches that come with online dating. "I kind of had that light bulb moment," says Wilson. "Wow, wouldn't it be fun if I could just let my friends do it for me? They have great insights. They're always going to toot my horn, and they love me, but they can also talk about my flaws and help me bypass some of the craziness that goes on." Ship is another friend-swiping app that launched last year. It is not surprising that both Wingman and Ship were founded by women; men, studies have found, often have a harder time than women building and maintaining friendships. In Britain, nearly 1 in 5 men says he has no friends at all. According to a spokesperson for Ship, women tend to have more friends swiping on their behalf than men do.

WUSA9 - July 17 - Tina Wilson explains how she decided to create a dating app when she noticed that the apps were all created by men. She also describes how this app includes singles' friends to help them find the right matches. 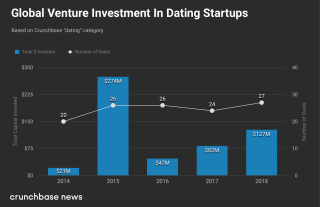 CRUNCHBASE - Apr 3 - US dating startups haven't attracted much funding. There were ~40 companies in the "dating" category on Crunchbase that were founded in the past three years, each with their own spin on the gaps they believe Tinder and Bumble haven't been able to fill. Tina Wilson founded Wingman, a dating app which involves friends in the dating process. Match Group partnered with content platform Betches to launch a similar app called Ship. Another new dating startup is Plum. The app is currently in its beta and aims to incentivize men to behave appropriately by implementing a ratings system based on communication, follow-through, and profile authenticity. "Anyone can have a good idea, but if the audience isn't there to back it up, that presents quite an issue," says Jeronimo Folgueira, CEO of Spark Networks. "It's very difficult for small companies to reach critical mass. That's a result of the sheer amount of competition and the massive amount of money that is required to spend on marketing," he said. But what does work? The backing of large players like The Match Group and Badoo. "Hinge is an excellent example of a company that had an amazing product, great concept, and it was going nowhere, and Match bought it for almost nothing," Folgueira explained, adding that now, with Match's backing, Hinge will be huge.

Why Millennials Are Burnt Out on Swipe-Based Dating Apps

MENSHEALTH - Feb 6 - Hinge's user base grew by 400% in 2017 after it eliminated its swiping feature. Once, a dating app that sends users one suggested match per day, reached 7M downloads last May. Still, swiping or not, some are giving up dating apps altogether, opting for offline dating and matchmaking services like Three Day Rule, which doubled its revenue in 2017, and now serves 10 cities in the U.S. "The online dating thing never came naturally to me. I found the experience quite overwhelming," says Tina Wilson, CEO and founder of the matchmaking app Wingman. "Trying to describe myself for a profile gave me anxiety." Eventually, Wilson's friends got involved. "They had way better insight into who I should be dating and loved to tell me so," she says. She realized her friends could play a vital role in helping her meet a compatible partner, so she created Wingman, an app that allows users' friends play matchmaker. Text-based apps are also on the rise. A spin-off of the popular Instagram account @_personals_, the Personals app will allow its lesbian, queer, transgender, and nonbinary users to post old-school personal ads.

DIGITAL TRENDS - June 4 - On dating app Wingman, singles get to recruit a friend to sign up and create a profile for them. Based on the concept of an actual "wingman," the app allows friends to take control over who singles match with and helps make swiping left and right feel like less of a chore. "I was never comfortable dating online. Most of my single friends were in relationships …, yet they were always very interested in my dating life and wanted to support my journey", said the app's founder Tina Wilson.

BRIDES.COM - Jan 5 - Wingman, the dating app that plays cupid for users' single friends, was founded by Tina Wilson. The idea came from her own experience of never wanting to date online and always picking terrible matches in real life. Her friends encouraged her to finally get online. They helped her write a profile and coached her throughout the whole process. Brides in particular make awesome wingmen. They've gotten through the [hard] part of dating. They’ve probably been through ups and downs—but they can be a little wiser now in helping their friends avoid mistakes or giving guidance on something that they wish someone had touched on with them. Wingman is also an opportunity for brides to still feel somewhat involved in the fun of single life.

PRWEB - May 23 - According to Wingman's recent survey, 90% of millennials would enjoy playing matchmaker for their friends. 70% said they thought the matches they would make for their friends would be better than if they pick their own dates. Wingman is not a dating app, but rather a growing community of "matchmakers" who want to do something good for a single friend.

MASHABLE - Apr 20 - Wingman is more like a matchmaking app. Singles can't create their own profiles or connect themselves with people. Their fate rests almost entirely in the the hands of their friends - wingmen or wingwomen. The app is the brainchild of Tina Wilson. She found herself single after a breakup and had a squad of friends who were eager to drag her into the world of online dating. They started searching sites for her. It was then that she realized there really was no easy way for friends to help each other out. And that's how Wingman came to be. She's been beta testing it in the UK and Australia for several years, and now she's ready to make it official in the U.S.